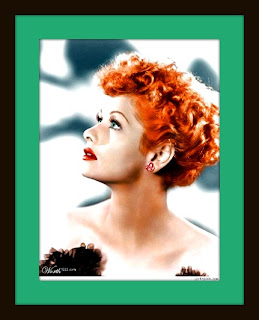 Today is the centennial birthday of America's First Lady of Laughter-Lucille Ball. It really is true that everyone loved Lucy. She was a TV staple when I was growing up. I saw a lot of the (now) vintage shows she did with her real-life first husband,  Desi Arnaz .

Lucy made it okay to laugh at adults when I was a kid. Unlike Ozzie Nelson, or Robert Young-both perfectly fine examples of TV fatherhood in the 50's and 60's- Lucy was an adult goofball. She had a never-ending line of get-rich-quick schemes going, and would do anything to get in on her TV husband Ricky Richardo's show, despite her apparent lack of talent. Another thing that stands out to me now was that the show was done in good taste. There were no cheap shots at the expense of others-no ethnic jokes, no jokes about handicapped people. The only concession was Lucy making fun of Ricky's thick Cuban accent- and then it was only Lucy who could do the ribbing, and it was done with lots of affection.

The character of  Lucy was funny and endearing- and to this little red-haired girl, she was gorgeous. I don't remember seeing any other actress with flaming red-hair other than Lucy. To an odd-ball red-haired kid whose entire family was short, stocky, olive-skinned and dark-haired, she made it okay to be different. It's a shame that many people today only remember her for her days as Lucy Richardo, because she was a brilliant actress and a gorgeous woman who had been a model in her earlier years. Lucy's career included a radio show, My Favorite Husband, which was the inspiration for the I Love Lucy TV show.

In her early years she was a contract player for one of the major movie studios and appeared in many movies as both an uncredited actress and as a character actress. At one point she made so many sub-par movies she was known around Hollywood as the Queen of the B's, and allusion to the quality of the films. Lucy went through four incarnations of her own show, with the plots adding and subtracting supporting characters and the plot varying slightly each time to spotlight the veteran actress. Her portrayal of a homeless woman in the made for TV movie Stone Pillow was a marvelous performance, one which I remember over 25 years later.

Thank you, Lucy, for a lifetime of laughter...

Posted by AmethJera at 2:31 AM