Faith vs 'In Good Faith'

"Bibles Made Available at NC School" 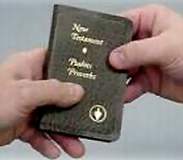 Ginger Strivelli says her son, a fifth grader, was given a Bible at the public school he attends. This story caught my eye because it happened in my home state of North Carolina. It seems a public school principal made the poor decision to disregard the very highly publicized statue of the  Separation of Church and State we have in this country by offering free Bibles to students. For this she is inexcusably wrong. The above story mentions that the students were given the option of leaving class to go to the Principal's Office, where the books were being given out to whom ever wanted one.

The Gideons International, a Christian fraternal organization best known for providing copies of the Bible for hotel rooms, donated the books to the school for free distribution. Their spokesperson said it was not their policy to have a teacher hand out Bibles in school, but that they did want to make them available. Supplying Bibles is what the Gideons do, along with offering Bible Study and other training as a part of their evangelistic ministry.

I am envisioning that the intention of a member of the local chapter of the Gideons meant well when he dropped off the box of Bibles to be given out to anyone who wanted one, since no students were lined up in an assembly and issued a copy forcibly. They were meant as a gift during the Christmas season, so I suspect that the  box of books were intended to be set on a table with a sign that said, "Free, take one." I am not going to criticize Gideons International for being faithful to their ministry because spreading the message of their God is why they exist. They have freedom of religion just like the rest of us, even if this was a poor choice- and I believe it was simply that.

However, I am going to blame the Principal, Jackie Byerly, for accepting the gift of religious texts in the first place. She could and should have turned the offer of Bibles down flat. The Gideons would have gotten over it eventually: I'm pretty certain they get their fair share of refusals,too. Surely Ms. Byerly knows there is a separation between Church and State, and that any institution that that is funded through taxes falls under that category. She allowed religious materials to be distributed on public property, when she shouldn't have allowed it. This is not a matter of equality- the law clearly states that there be no exception, meaning no religious materials on the premises, period. Her decision was wrong. I'm not going to try to second guess that Ms. Byerly is herself a Christian because that should not be an issue in this case- as the representative of the public school system, she should have upheld the policy of zero distribution of  religious materials in her facility.

Ginger Strive-who is a Pagan- says her son, a fifth grader, was given a Bible at the public school he attends. She is outraged with about as much righteous indignation as anyone can muster, according to several reports. The story has generated a fair about of PR in the media. Pagans are up in arms because Bibles were given out in a public school and some are responding with the usual amount of anti-Christian sentiment.  As a Pagan and more importantly to the point, as a citizen, I am upset and concerned because an institution funded with my tax dollars has distributed religious materials in an educational no-fly zone. I would have the same feeling if the materials were political in nature.


Because I know there is always more to a story, I did a little research online... And just as I knew I would, I found some interesting details to further flesh out this story. According to the Christian Post website:"...Strivelli argues that making an announcement in itself is a form of coercion, since students have an opportunity to leave class and will no doubt do so when given the chance. She also claims that a teacher physically handed her son the Bible." (http://www.christianpost.com/news/pagan-mother-outraged-after-son-given-bible-at-school-65279/ )

Frankly, I'm finding a bit of a disconnect with her statement in which she indicates that her son  participated as a means to get out of class.  This means he voluntarily went to the school office on his own-just to get out of class- which says the onus is on her kid. After all, the only legitimate reason for him to have been out of class at that time would have been to go to the Principal's office for a Bible. No one forced him to leave class. No one coerced her son, and the assumption that "...since students have an opportunity to leave class and will no doubt do so when given the chance." is just that-an assumption on her part- because she honestly can't say she knows the motivation of anyone other than herself. Saying that making an announcement over the school PA is coercion is a  stretch of the facts. The announcement did not say, " Come to the Principal's Office right now to get a free Bible or else". Besides, I've been a teacher, and believe me, I know plenty of fifth graders who would have needed a lot more motivation than getting a free Bible to them to have worked up the gumption to take a few minutes stroll to the Principal's office, even to get out of class.

For the record, there was no mention in the original report from About.com saying that a teacher physically handed Strivelli's son a Bible. None. I believe that Patti Wigington is a reliable news source for the Pagan Community, and a mention of someone handing the student a Bible was never made in her story. That statement seems to have come from Strivelli as a codicil after admitting that her son went to the Principal's office just to get out of class, which, let's face it, sounds a little wiggly.
( Actually it sounds like, " Hey, my kid found an excuse to get out of class for a few minutes, that's why he went to the principal's office.")

Principal Jackie Byerly has stated that she would handle the distribution of other religious material in the same way she distributed the Bibles. I don't think she yet has a handle on the concept that no religious material what so ever should have been distributed in the first place. It is obvious that she hasn't heard of the lawsuit last year against a Tennessee school district doing something similar. (http://blackchristiannews.com/news/2010/01/tennessee-school-district-agrees-to-stop-handing-out-bibles.html)

Meanwhile, Ginger Strivelli is trying to test the water in an interesting way: by asking the school to distribute Pagan books she has contributed to as a writer "... I need to contact the Editor who used my Chapter in her book, surely she can chip in some for my work on that book for her..."(http://www.patheos.com/blogs/wildhunt/2011/12/pagans-outraged-over-bible-distribution-in-buncombe-county-school.html)


Uh huh...I'm beginning to suspect there's more going on here than meets the eye and which I personally find questionable and in poor taste. I'm reserving my opinion on this until later, because I'd like to see how it all plays out.

What I will say is this: Parents have a personal responsibility to oversee to their child's religious training. That includes a discussion on formulating a polite refusal when offered religious materials from another faith which you as a parent find offensive. A child of nine or ten years old knows right from wrong and is able to understand the basic tenets of their faith. He or she can certainly be taught to say, " No, thank you." or even " My mom doesn't want me to have that."

Spiritual training and the distribution of religious materials is the sole providence of faith communities and their member families. It is inappropriate for public schools to promote religion in the United States and has been illegal to do so since 1963( Supreme Court ruling, Murry vs.Curlett).

There are valuable lessons for everyone involved in this situation which I'd like to see come to a productive resolution instead of setting off another firestorm of religious persecution.

Posted by AmethJera at 2:51 AM

Email ThisBlogThis!Share to TwitterShare to FacebookShare to Pinterest
Labels: Bibles in school