Uriel, the Flame of God 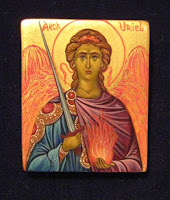 I will admit to you that I learned more about the angelic realm through ceremonial magic than in seminary. We talked about them a lot- we just didn't learn much about them. The reasoning was ( and still is in most mainstream religious teaching colleges) that there is very little concrete empirical  information  about angels other than they are messengers of G-d. The majority of them seem to appear out of  nowhere, deliver the goods, then just as miraculously disappear. Jewish tradition refers to them as 'ministers', with their names being their specific ministry or mission.[http://www.faqs.org/faqs/judaism/FAQ/06-Jewish-Thought/section-14.html ]

The sacred Hebrew texts mention several angels (or archangels) who have had notable missions. Sepharadic or Chassidic Jews do not pronounce the names of these angels aloud in readings and prayers, recognizing them for their tasks, but not giving them credence that could be mistaken for worship.While not mentioned in Christian cannon, Uriel is a significant presence in apocryphal texts.

The Archangel Uriel (aka  Auriel, and other names) is among these ( along with fellow archangels Michael, Raphael, and Gabriel). His name translates roughly to" G-d is my light". He is often portrayed with a flame and sword, sometimes the two being combined due to a Biblical reference where he is believed to be the angel armed the flaming sword who kept Adam and Eve from returning to Eden.[http://www.jewishencyclopedia.com/articles/14606-uriel,] This is based on a variety of folklore which associates him with illumination through fire, heat, light and traditionally names him as the angel who oversees Sheol according to the Book of Enoch.( It has been postulated in recent years that this angel guardian was actually Michael, who is often portrayed with a flaming sword. My personal feeling is that Michale has recently been used to supplant Uriel in myths due to the current resurgence of the cult of St. Michael that has infiltrated the occult.)  Uriel is also sometimes referred to as a Cherubim.http://en.wikipedia.or/wiki/Flaming_sword_%28mythology%29]

Uriel is also known as the Angel of Wisdom, because of his association with illumination. Doreen Virtue, PhD recommends that Uriel be called upon for "...problem solving, brainstorming, or important conversations".[http://www.amazon.com/Angels-101-Introduction-Connecting-Working/dp/1401907598] Those in some mainstream religions such as Catholosism and the Eastern Orthodoc traditions invoke his  help with decisions or to solve problems through prayer. In this role, he is depicted as carrying a book or scroll, or with the Flame of Truth burning on the palm of his hand. Because of this he has been adopted as the patrol of those being confirmed in the Anglican tradition, where he is given additional guardianship over the arts and sciences. John Milton's Paradise Lost features Uriel as "...the sharpest sighted spirit in all of Heaven"; he is also mentioned in Hideaway by Dean Koontz as the protector of a survivor of a near death experience to fight off the evil that continues to clamor after his soul.

Pagans are likely more familiar with Uriel as he is portrayed in the fantasy series Chronicles of the Dervni by Katherine Kurtz, where he is the Angel of Death who escorts souls to the Veil. He is a popular figure for conjuration by those who practice Ceremonial Magic and Kabbalah. Aleister Crowley and S.L. MacGregror Mathers mentions him frequently in their texts on Enochian ceremonial magick as one of the Watchtowers. ( Watchtowers being another version of  'The Watchers', spiritual beings each assigned a direction and element in some magickal traditions.) An invocation to Uriel, from the Grimorium Verum, which I first became acquainted with through The Book of Ceremonial Magic by A.E.Waite, features a lengthy invocation to Uriel. I have just recently found it online through the excellent resource site Sacred Texts [http://www.sacred-texts.com/grim/bcm/bcm76.htm]. As with all magick, Uriel can be evoked in the positive or negative, and I leave you with my usual caution to not call up anything you are not absolutely certain you can control and bind if necessary.

Posted by AmethJera at 6:39 PM