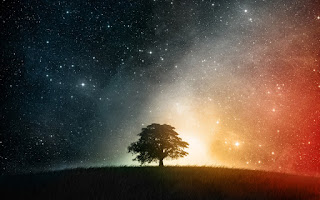 We live in a constantly evolving Universe.  Change goes on within and all around us all the time. We are forever in a state of flux. Our personal beliefs and cosmologies change. I don't see  things in exactly the same way that I did 20 years ago because I'm a different person today than I was then. Things change, and that's okay. Because really? In the larger scheme of things  we don't have a choice in the matter. Acceptance of that tiny fact is the first step to integration and growth.

Depending on whatever new I learn, my opinion about people, situations and how things are  re-formulated. My thoughts about things evolves as I incorporate new knowledge into my understanding.  I am not the same person I was even five minutes ago on a molecular level. The world is not the same as it was yesterday. This is factual and born out by the saying" The Truth is not what you see, but what you believe about what you see." Your  viewpoint isn't the truth, but it is your truth. Belief is merely an assumption.

Pagans (for the most part) are particularly analytical people. We are experts at deconstruction. What it seems we aren't very good at is knowing the difference between authentic examination and tearing things apart-including and especially, each other. This, in my humble opinion, is why we have the same conversations over and over about defining who is Pagan and who gets to play in our sandbox. And I have to admit, I often wonder why this is so important to know in order to determine what we stand for morally and ethically. I suppose there is an argument about knowing who you are before undertaking an action, but personally,  I believe right action should take place no matter who you are.

Talking about whether we engage in right action because we are human or because we are spiritual is a chicken versus egg argument. To quote Buckminister Fuller, " We're all passengers on Spaceship Earth." [http://en.wikipedia.org/wiki/Buckminster_Fuller ]. The compassion we have for one another, especially for the suffering of others, and the way in which we respond in helping them to come out of that suffering is something that stems from empathy. We relate to how it feels because we can put ourselves in that place. In that instance, what we call ourselves doesn't matter. By nature, humans are helpers at our most basic level; that's the way we are wired. We have a need to serve in the most beneficial and satisfying way for others and ourselves. While that may be influenced by our spiritual beliefs, for the most part it comes out of a concern for the welfare of others and the way we would like to be treated. Altruism is two sided and not entirely selfless: yes, we do want to help others, but in turn, should the need arise,we hope to be helped ourselves. The majority of us ascribe to the moral and societal rules of common decency, regardless of whether or not we believe in the existence of a deity.

In other words, it's not who you are, it's what you do that makes a difference in the world. To be perfectly blunt, the only person who should care about who you worship, or how you go about it is YOU.    It's not my place to tell you whether or not you are a Pagan. It's none of my business, because, you see...I don't care. Truly, I don't. I don't care if you venerate Wonder Woman as the Goddess, or believe the flying monkeys from the Wizard of Oz are angelic messengers, or see Imminent Divinity in the Titans.

If you do, then that's fine with me. You don't have to fit my personal definition of what is and isn't  Deity, and you don't have to buy into mine. As it's so often said,we can agree to disagree. I have enough on my plate dealing with defining and forming my own personal theology. I practice as I choose, when I am lead to do so by Spirit. I really don't owe any explanation of who or what I see as Divine, and I certainly have no need to justify my spiritual practice. I don't seek or need  the validation of others [http://amethjera.blogspot.com/2011/06/pagan-enough.html].  Take it and accept me for who I am or leave it and walk away. ( The only time I will call bullshit is if I see someone irrefutably  ripping someone else off).

You would  think  that as often  as  we have this conversation in our living rooms or  in the pub, the subject of "Who-is-and-isn't-a-Pagan" would  be a non-issue to the majority of  us by now.   I recognize that our community has exploded in numbers in recent years and there are a lot of new-comers at the table who may need to sort things out, but what I'm seeing isn't limited to that kind of spiritual formation. What I'm seeing is not only a lack of tolerance for diversity, it's exclusivity. It's widely understood that the word 'Pagan' is an umbrella term covering the many traditions and varieties of serving the gods. [ttp://www.incitingariot.com/p/project-pagan-enough.html] There are no membership  rules for who gets to join the 'club'.  So frankly, when I see someone appoint themselves as a gatekeeper for the community, I do think we need to react and disabuse the individual of that notion swiftly...Kudos to those who have done this respectably, such as  Jason Mankey [http://www.patheos.com/blogs/panmankey/ ] and the collective at Pagan Activist  [http://paganactivist.com/2013/06/16/standing-up-against-a-step-too-far/]. You can ask questions about someone's spirituality without questioning their practice.

Because, you see, as I've said before, it's my path, and I'll travel it my way, thank you very much.

Posted by AmethJera at 7:11 PM