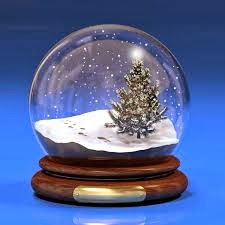 The first few days of the New Year always feel a little weird to me: jumbled and not quite settled, like the inside of a snowglobe someone has just shaken.

Moving in the middle of last year has done a couple of things. While it did give me my own apartment-the only space that has truly been my own in six years- it has left me feeling uprooted and unable to focus. There are too many little devils in the details- or perhaps the details are the devils. I have managed to celebrate the Sabbats that have passed  (Lughnasadh, Samhain and Yule) on a  superficial level, skimming through quick solitary rituals. Frankly, I feel unfulfilled and slightly queasy. Maybe it's because I'm still adjusting to the vibe of the area ( there is incredible energy here), or because I'm still reeling from making the move from one place to another so quickly- but I am off-kilter and a little giddy, unable to settle down and concentrate on what I'm doing for very long.

With the Cold Moon- traditionally the most powerful moon of the year-only hours away, I feel the need to work on what the Theosophists term the etheric plane to clear this up. The etheric plane is the place we are most ourselves in the realm of magick. After spending so many years finding myself, I refuse to let go of who I have become, which, as I was reminded by my  friend Sandra, who's a Native American shaman..."Who you have become has always been your birthright."

I am considering a very formal ritual for this first full moon of the year. Perhaps it will bring me back to some order and discipline. Although I am basically a hedge witch, sometimes I like the ceremonial approach. ( I don't feel there is any one form of the Craft more more valid than another.) I believe that the Universe responds to whatever it takes, barring anything maleficent or generally harmful. Right now I think I need to focus with more specifically on the crafting angle of my practice since I recently reconstructed the religious aspect. The nature of the Universe it to be constantly changing, and spirituality needs to change,too, to remain relevant. I'm not talking about an about-face, just a few minor shifts in consciousness and practice. Evolution, after all, takes place at its own pace. That's the way of Nature and sometimes I have to remind myself of that little fact when I want immediate results.