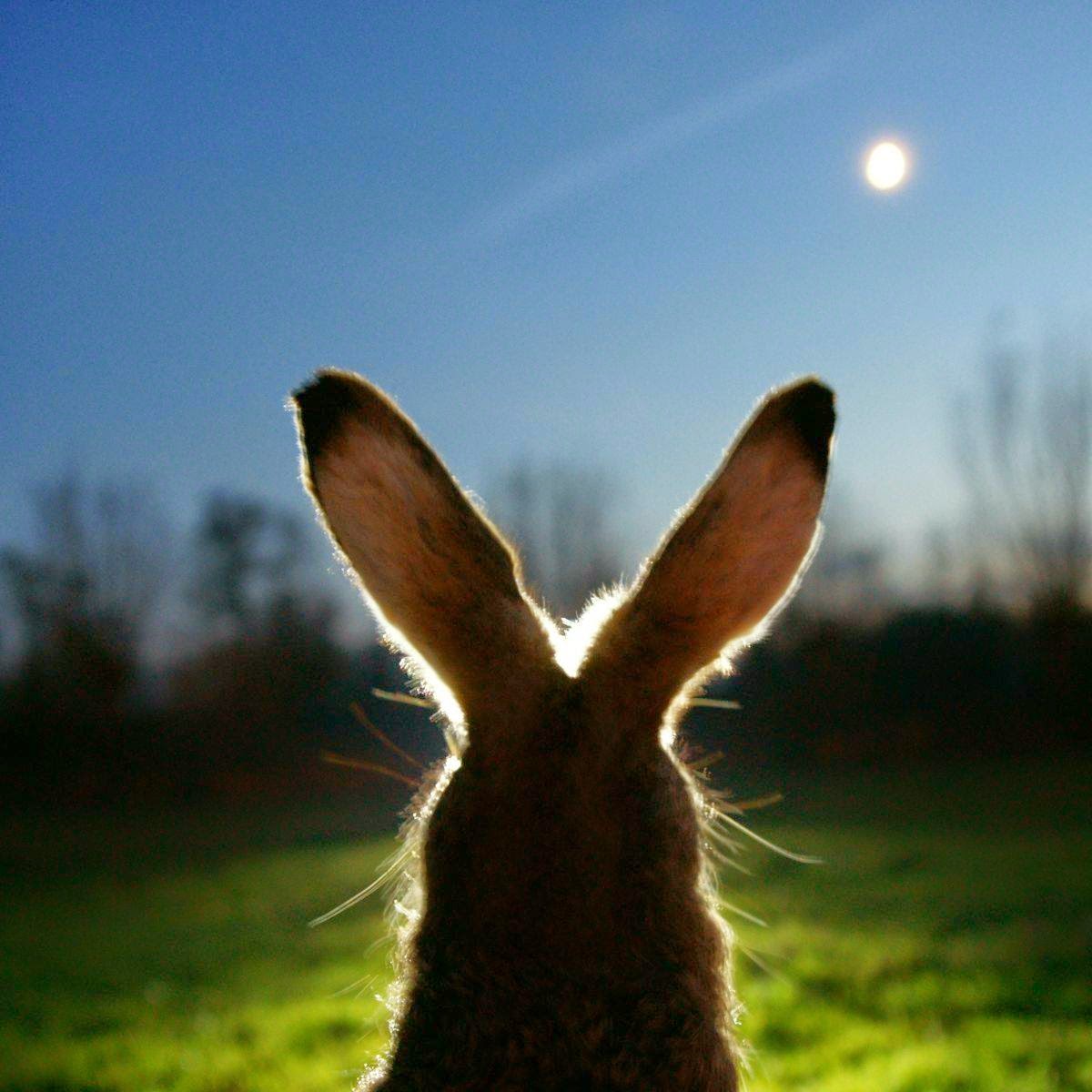 Hare,hare...ahem...Spring is in the air, Easter eggs are on the lawn,and there are leapin' lepus  are everywhere! Unlike their close rabbit relatives, hares bare their young in a nest of flattened grass (not in a burrow underground), and they are fully furred with eyes wide open and are instantly independent ( those equally adorable baby bunnies are born with their eyes closed and are essentially naked)...which means the hare literally hits the ground running.

Normally quiet, the male hare goes into a hormonal frenzy during mating season. The image of two hares standing on hind quarters and "boxing" aren't two males competing over a female, but is more likely a female striking a male with her front paws to avoid mating.

In tribal mythologies-African and Native American-the hare is a trickster. A character who lives unconventionally by his wits, Brother Rabbit (Br'er is a contraction, likely an honorary title given to him by indigenous people to recognize kinship) wrecks havoc on his enemies in outrageous situations.  It is believed that the Br'er Rabbit Stories popular in the Southern United States, are versions of the trickster myths retold by slaves which were written down by Robert Roosevelt, an uncle of US President Teddy Roosevelt, among others.  Very similar stories were told and known in Alabama,Georgia and Louisiana.
[http://en.wikipedia.org/wiki/Brer_Rabbit]Joel Chandler Harris made Br'er Rabbit into a folk hero through his books. These days we are probably more likely to recognize him from the Disney movie Song of the South [http://www.imdb.com/title/tt0038969/].

As a totem animal, the hare is know for it's ability to successfully hide when threatened; they are very clever and will double back when being pursued by a predator. Those with hare as a totem must be fluid and be able to change direction at a moments notice in order to take advantage of situations with only a brief window of opportunity.[Cinnamon Moon,http://spiritlodge.yuku.com/] Hares are one of the animals traditionally associated with witches because of their nocturnal habits; witches were often accused of keeping hares as a familiar. Legend has it that a witch could shapeshift into a hare [http://kittythedreamer.hubpages.com/hub/Shapeshifting-Witches-Legends-from-Europe-and-North-America]. In Greek mythology, the hare is associated with Hecate, goddess of witches.

Hares and rabbits were also associated with the Moon in Asian and South American folklore. For centuries, dark markings on the lunar surface show an outline that it thought to show a rabbit. There are numerous myths in both cultures concerning Lepus.[http://en.wikipedia.org/wiki/Moon_rabbit].
The rabbit also appears as one of the signs of the Chinese Zodiac.

The Easter Bunny was first mentioned in a story by German physician and botanist Georg Franck von Frankenau in his work "All About Easter Eggs" [De ovis paschalibus,Satyrae Medicae XVIII,Heidelberg,pg 6.], in which he referred to a tradition of leaving eggs at Easter for children. German immigrants to the United States in the 18th century, specifically the Pennsylvania Dutch brought with them the tradition of Osterhase (which translates to "Easter Hare", not "Easter Bunny").

As a final point of interest, three hares pictured chasing one another in a circle is also symbolic of the Triangle or Trinity. It is seen in Christian,Buddhist,Islamic,and Jewish symbolism, as well as other Eastern Religions.[https://answers.yahoo.com/question/index?qid=20101011195535AAHwDqR