Seeking Light in the Darkest of Days-Part III 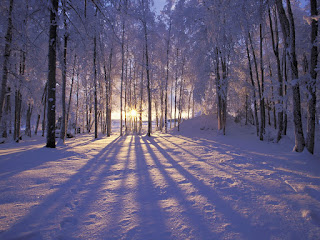 I began writing Seeking Light in the Darkest of Days in 2003 with intention of the devotions and meditations becoming a book of seasonal liturgy for the Winter Solstice-the waning and waxing of light. The original draft began the day after Thanksgiving with prayers and invocations that centered around gratitude because I wanted that theme to carry through the entire manuscript, which included the Feast of Sol Invictus but ended in the Spring after the daylight began to measurably grow longer.

After writing the introductory sentences for the first days and their  accompanying reflections and meditations, I realized that carrying that through to the Solstice broke neatly into three sections of seven days, which I was pleased to find because I wanted the devotions to echo the premise of the Latin octava dies, or an octave ( which is known commonly as an 'eighth day' but is actually just a seven day week). The concept of the 'eighth day' gives the octava dies a magickal feel somewhat like the proverbial "day that is not a day" outside of ordinary time that is spoken of by some traditions during circle casting. The sanctity of octava dies is, of course, implied because it is men who set things apart to make them sacred.

I have always loved the weeks of anticipation that lead up to Christmas Day known as Advent in the Christian tradition. The word Advent simply means "coming", but there is so much more feeling and emotion to those weeks because the faithful were waiting for the cycle of the Church year to begin again, for the Son of God to be born, for the story to continue as it had throughout the centuries. When I was studying to enter seminary and much better versed in mythology, I understood the wideness of that waiting. The Divine Child expanded beyond the Christ Child and the Son; he was surely all of that, but much more as Sol Invictus, the Invincible Sun, the All Provider who returned on the horizon just in time before our agrarian ancestors rant out of food (and hope) in the middle of the cold season. With the lengthening light, the return of the Invincible Sun truly made him a savior in a very literal way. More sunlight during the day meant more warmth and less worry about what would happen when the dried,smoked or salted meats and vegetables ran out because-hooray-warmer weather meant the ability to plant and herd animals in the fields. I wanted to capture the emotion of thanks giving and gratitude in that moment in what I was writing. I had the first seven days written out and quickly added the draft of a second octave...and then everything stopped, because as often happens, Life took a turn and there were other priorities to attend to. I became ill and lost my job, and subsequently was evicted from my apartment and was actually staying in a homeless shelter for awhile. Life during that period was difficult, disconcerting, unsettled and frightening. What brought me through was the knowledge of cycles I'd learned from practicing a path of Pagan spirituality. Life occurred in cycles: being homeless was like surviving the uncertainty of Winter- but Spring would follow and things would improve until I entered my own personal Summer season and things would works themselves out and I could get settled back into a normal life. Things might not be the same, but they would stabilize, and they did.

Thankfully, before all of that happened, I'd had the foresight to transfer the original copy of what I was writing in a composition book onto a disc and stored it with friends who kept my other belongings while I was rebuilding my life. That is the first fourteen days of Seeking Light in the Darkest of Days. The final seven days were drafted a few weeks ago and appear here now. After so many years have passed-twelve to be exact-these passages had a history and the backstory deserved to be known. I have used these words in personal ritual, in public readings, and in groups. My spirit has whispered them to my soul when I had very little to hold on to, and they have endured time and again. And so, here is the last octave to Seeking Light in the Darkest of Days:

Day 15
“ God may be in the details, but the Goddess is in the questions. Once we begin to ask them, there’s no turning back”   - Gloria Steinem
I think it's equally important to discern not only the answers but the questions themselves. Why is this being asked and why at this particular time? The question is only answerable in the moment; in the next moment, the answer will different because the moment is different. All there is appears as Now as soon as the question is asked.The questions are static, but the answers- like the Goddess and the tides of the Moon- are fluid and changing. The only thing that continues to endure is the Goddess, She of Many Names. The God, as Consort, is indeed in the details, but because he plays many roles, it is he who defines us in that frozen moment in time.

In the shining disc of the Moon, I see  Your reflection- and my own.

Day 16
“ I gradually came to understand that beneath the familiar goddesses of the patriarchy, there is a much more ancient Goddess.” Carol P. Christ

The majority of us came into the realm of religion through man-made, patriarchal religions. Father God was considered the All and Everything. There was No One else. Worship of the Goddess had been suppressed and She was only glimpsed through the many female saints the Church Fathers allowed the faithful to venerate.   Think how differently the mainstream religions would be reacting to the world's problems had the Goddesses of Antiquity been allowed to thrive.


I reach among the thorns, seeking the Holy Rose.
Day 17


"This sunlight linked me through the ages to that past consciousness."Richard Jefferies

I often stand in these last few days of the year yearning-for what I do not know. I feel a bit sad and a bit in awe at once, and the emotion is bittersweet. Holiday memories come flooding back, but there is still something calling me from beyond the time I was born. I have several beliefs about what happens after we die, and on of those beliefs is that our soul fragments into pure light upon the moment of death and we return to the Universe, or the Cosmic Cake Mix, as a friend likes to call it. I like this idea of us all being mixed together, a little of this one and that one being added in to make a new creation, and I often wonder if that's where lives we've lived before come from.

We are drawn to the beckoning light to become- just to become. Living life will take care of the rest.


"The leaf that captures a stream of sunlight, and then transfers its energy to the tree, serves one purpose in the spring and summer, and another completely different one through the fall and winter."
Guy Finley

It's been said that each of us have our own path, our own job to do in this life. We make our contribution to humanity in individual and unique ways. I believe we are destined to do this. I also believe that it will take an entire lifetime for most of us to know what that will be.

Reflect, O Radiant Soul, on your being. Honor the source that birthed you.

Day 19
"At times our own light goes out and is rekindled by a spark from another person. Each of us has cause to think with deep gratitude of those who have lighted the flame within us.”  Albert Schweitzer

This quote from Schweitzer is perhaps his most famous. It is certainly my favorite from him. There are days my light doesn't burn as brightly as it should and days when I have enough light to share with someone who isn't reflecting the light as well as they could. There are too many who have kept space with me to name; unfortunately I've forgotten the names of others. But I am grateful they have fed my flame on those dark nights of the soul.

Rise up in me, O Flame of Illumination and Glory and light my path.
Day 20
We wait for many things. Our longing is never ending. We have momentous wants and expectations.
We aren't always granted our desires, and in a way I believe that is good; it teaches us that we are not as in control of things as we think we are, that there is something or someone guiding us through the Universe and the vastness of life. Our task is to find and identify that something or someone and develop a relationship as a co-creator so we may share in a living stewardship.

Who or What or Where....I do not know now. I wait for the clouds to part and show me Radiance.

Day 21
The Longest Night of the Year, the Shortest Day. We kindle our fire for warmth and light, bring in the evergreens to remind us that life continues even in the cold times, and hang them with bright ornaments to encourage the Sun-the Spark of Life-to return. If we are fortunate, we gather with friends and break bread to tell the old stories and. The spirits of our ancestors and beloved dead stand just beyond the shadows as we lift a cup and remember their names. As we celebrate the return of the Invincible Sun, we ask the Divine Child to remember us, too. Good Jul to us, and every blessing.

From the fading day to the quickening light, let us remember that we are the Guardians and Stewards of this sacred place, this holy land, our home. Let us welcome the Lord reborn and the Lady who gives life, and let us see the Divine in each other.

Posted by AmethJera at 4:22 PM