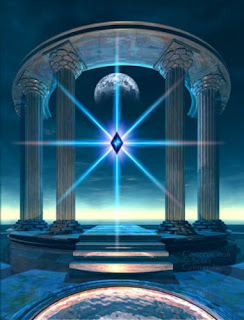 "Bite the dust",  "Buy the farm" and the ever popular "passed away". We will say almost anything other than to name the actual event when someone dies. In the modern lexicon we don't die, we "expire" or enter into "eternal rest". If the person speaking is of a religious bent, then we are "called Home" or "Go to be with the Lord". Not all euphemisms are evasive; as "Going the way of all flesh"is a rather accurate description, as is "Breathed his/her last". Those of us practicing Pagan or other Occult traditions are rather fond of saying someone has "crossed the Veil" or something else that denotes reincarnation, regeneration, rebirth, because many of us believe in some form of continual existence on another plane of reality that transcends the physical universe.

Because our Pagan faith traditions view death as a part of the cycle of life, it is less taboo to speak of death and the dead. We welcome death as merely the end of our earthly existence because that fits our belief in a general esoteric cosmology. We believe there is more. Individual traditions have specific versions of what takes place after death. The most popular idea is the Summerland, a concept shared by Spiritualists,Theosophists, Pagans and New Age spiritual practices. Each individual has his/her own idea of exactly what the Summerland is like, but most agree that it's a beautiful place of peace and serenity where the soul is at peace. Those who believe in reincarnation believe it's the place where the deceased dwell until the soul is ready to incarnate again. Some believe it is a permanent place, a next level of existence that is a part of an ongoing enlightenment. Yet others believe we simply become a part of the Cosmic Cake Mix when we die, the elements of the body and mind melding with the Universe, providing elemental and spiritual material used by the Great Source to renew the species.

I believe that dying, death, tending to the body afterward and ultimate disposal of the remains are all sacred acts. When we lived in a predominantly agrarian and tribal societies, death was an intimate occurrence that eventually affected everyone. Those in our social group died from injuries or disease or simply grew old. The community came together and everyone pitched in to help get things back to normal function. That included preparing the body for burial, usually in a local church yard on one's own property in a family grave plot. The community's actions were instinctive because they were a cohesive group and death was a natural occurrence.

Death became a business and funerals a commodity during the Civil War, mostly out of necessity. The number of lives lost was phenomenally unlike anything the United States had experienced previously in its history. Disposal of the corpses became a public health issue that far surpassed one of aesthetics. Unsanitary conditions, lack of hygiene, tainted water, poor diet and lack of shelter. Diseases such as dysentery, malaria, smallpox, typhoid fever and pneumonia swept through camps belonging to both the Union and the Confederacy and contributed to as many deaths as injuries incurred in battle. This led to war dead being quickly buried near the site of battle, which outraged the sensibilities of many surviving families, particularly in the North. Union families wanted their dead returned for what they considered a "proper" burial, that is, on Northern soil accompanied by Christian rites- which entailed shipping bodies long distances out of the war zone, notably by train, in oppressively hot weather. Army and civilian surgeons contracted by the Union performed embalming services on the battlefield, in field hospitals or another suitable place using a cocktail of formaldehyde, arsenic and alcohol to prevent corpses from putrefying in order to return them to their loved ones. Some civilian "undertakers" were also trained in this procedure. Embalming had monetary advantages for all of these individuals as they were commissioned by the Army Medical Corps, somewhat lessening the nobility factor of preparing bodies out of emotional concern for the survivors.

Embalming, as a temporary method of preservation, worked well and served the need for which it was designed-but when the body began to ultimately break down, the chemicals inside it seeped out into the soil and eventually into the water table, poisoning both. Cemeteries began using grave liners made of wood or brick, and eventually cement to control sinking of the grave and erosion, and to contain leakage. Public cemeteries expanded beyond the humble churchyard to 'memorial parks' designed to express eternal rest and peacefulness. In the late 19the and early 20th centuries these memorial parks became gathering places for family, friends and the public, weekly destinations in which to walk and ruminate, and even share a picnic meal.

Today the funeral industry is a big business. Secular/corporation run cemeteries are too, because after all, what else are you going to do with a body (short of cremation)? On average it costs thousands of dollars for a modern funeral, a financial burden that as a minister I believe borders on taking obscene advantage of those grieving the loss of a loved one. Add that to the environmental impact of cremation (carbon emissions) and burial (including that some areas are running out of space for traditional graves). The projection of needed burial space for urban areas in the future is staggering.

Which is why I have become interested in alternatives. If you are a minister,HP/s, elder or have another type of leadership roll in a spiritual tradition, you will eventually be faced with the mortality of one of the members of your group and family, friends and colleagues will seek your counsel. We owe it to those we serve to have at least a basic knowledge of the funeral industry and viable alternatives. Most of the alternatives are still on the drawing board or in the test stage and not yet available to the public, with the exception of two- Resomation and Green Burial.

Resomation (or Biocremation as it is sometimes called) is the process of alkaline hydrolysis where the body tissue is dissolved using a mixture of hot water and potassium hydroxide (lye) in a special chamber. What is left is a liquid containing amino acids, sugars, salts, peptides and calcium phosphate.The resulting liquid is sterile and can be released to the common sewer (embalming does the same with cadaver blood and body liquids), while the bones have become fragile, chalky fragments which are processed (reduced to ash) and returned to the next of kin. Resomation uses less fuel than  contemporary cremation and releases no mercury into the atmosphere. Resomation is available in limited areas through specific funeral providers, but is gaining in popularity.


Green Burial is being touted by some as a return to more natural way of disposal. The body is buried in a designated 'green cemetery' sans embalming, in a biodegradable container or simply placed in the ground in a shroud. Family and friends are given the option of preparing the body of their loved one themselves, mostly under the guidance of a specially trained undertaker (which is not necessary but may be desirable). More information in the link; be sure to read the entire website, especially the 'education' section. Also for reference, Circle Sanctuary in Wisconsin has maintained a green burial ground for years especially for Pagans and others who's practice is earth and nature oriented.

[Undertaking LA is a progressive funeral home/service owned and operated by Amber Carvaly and Caitlin Doughty, founding member of The Order of the Good Death, whose videos "Ask A Mortician" has broken ground in informing the public about often taboo subjects relating to death,postmortem history and the funeral industry. Available on YouTube and Facebook]

The Pagan Book of Living and Dying
Starhawk, M.Macha Nightmare and the Reclaiming Collective

The Journey Into Spirit: A Pagan's Perspective on Death, Dying and Bereavement
Kristoffer Hughes

Email ThisBlogThis!Share to TwitterShare to FacebookShare to Pinterest
Labels: contemporary funerals and alternatives, general history of death practices in the US, green burial, reference material for Pagan and earth-centered spirituality, resomation