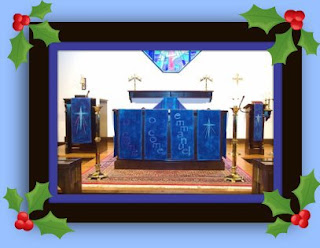 [Sarum Blue Vestments in a church sanctuary for Advent]

The four Sundays before the Feast of the Nativity -beginning either the last one in November or the first one in December- are set aside in the Western Christian world as the Season of Advent. It's a time of introspection and renewal at the start of the Church Year ( the time when Bibical readings of the Lectionary recycle.) Most popularly it was a time to prepare candidates for the Rite of Holy Baptism in the Christian Churches, but for those members already having received the Rite, it was a time to study religious texts and read inspirational stories. In more popular usage of the day. it has become family time, when everyone gathers to read a prayer as a candle on the Advent wreath is lighted, listen to or sing Christmas carols, bake and make crafts for the holidays. The traditions vary according to faith tradition and within individual parishes and families.

The Pagan traditions of bringing greens indoors to decorate were modified by the Christian Church; the austere Sun Wheel becoming the Advent Wreath.(It's necessary to note that mistletoe- the Sacred Golden Branch of the Druids- was never to be taken into a Christian Church. My how times have changed!)  The mythology changed little-both honor the birth of a Divine Child. The symbolism changed even less- greens formed into a circle or attached to a wagon wheel, then divided into four quarters, and candle anchoring each quarter. In many Anglican Churches today you will still find the wagon wheel type of Advent Wreath suspended from the ceiling and lowered each week with much ceremony as another candle is lit to mark the time. Newer churches use brass candelabra especially designed for the purpose and only used for this time of year; some have a small wreath of greens attached, some are purposely made with a brass circle to hold the candles and ribbons tied on, or flowers attached. The decorations are only limited to the imagination of the local Altar Guild members. Some folks-like me-have a home version of the Advent Wreath, although I no longer keep strict Christian tradition. My own wreath is a small circle of greens layed in a circle on a silver- plated tray, four candles at the quarters and the circumference filled with pine cones or nuts, artificial poinsettias, or ribbons. I have used red, green, purple or white candles depending on my mood and finances, and I never have the same wreath twice. I pray for the renewal of my spirit as I await the birth of the Divine Child at Yule and Christmas. The wreath symbolizes the sun, the four elements and directions coming together at the center, and the return of the Sun and the Son. The many meanings keep it mystical for me.

The first Advent Wreaths most likely were made of cut branches and adorned with tallow candles; later their meaning changed slightly with the royal blue of the Sarum Rite used in  English Churches prior to the introduction of the first Book of Common Prayer in 1549. Like most of the liturgies attached to psycho-pomp, the Sarum Rite was extensive and complicated-and in Latin.Later practice found the liturgy simplified and said in English, the royal blue of the Sarum Rite changed to royal purple, not only to symbolize the expectation of an event associated with the Divine, but to tie in with the liturgical colors and similar waiting period of Lent ( The colors of Lent differing from a deep violet- more red to distinguish the imminent death and resurrection of Christ than the royal purple of Advent- that still retained some blueness.) During the Victorian era it became fashionable in churches to return to the Sarum liturgical colors, but not the Rite itself, which was long lost to history. As the Church is populated by fickle humans, the colors of Advent changed once again back to the royal purple with a singular note-one purple candle was replaced on the third Sunday with a rose pink one to honor the Holy Mother for her contribution to the event. Some modern day Advent Wreaths add a white or gold candle placed in the middle of the wreath on the 25th of December to denote the Holy Child has been born.( I use gold in my wreath because it's the color associated with the God.) What ever prayers you wish to say is acceptable, as there is no longer a hard and fast liturgy for the season; you may pray everyday during the season(lighting the candles every night) until the Nativity or just on the Sundays as you light each new candle (The first week light one candle, the second week, light the candle from the first week, then a second purple, the third light two purple and the pink on, then all four candles on the fourth week.The candles will begin to stagger in height. On the eve of the Feast of the Nativity, light the four candles and the center candle. Let the four Advent candles burn down together then, for Advent is ended...the waiting is over.

Posted by AmethJera at 1:57 AM