The Last Days of Autumn 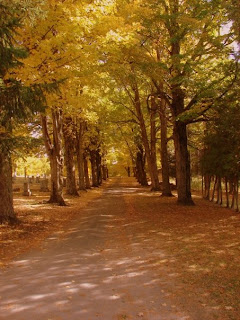 Once again we've survived the chaos that has become Thanksgiving: the relatives have gone home, the dishes are done, the all-day football games are over and the turkey carcass is summering on the stove....It's quiet. Blessedly quiet, and we all breathe a collective sigh of relief that the world has stopped and let us get off, if only for a moment.

The whirlwind of last minute grocery shopping and preparation for the blow-out feast is now a memory. If your home is anything like mine used to be in the days when I was the ring master in the Great Thanksgiving  Circus, it's somewhat of a shamble. The dishes weren't quite all put away and there was a large group of cartons containing leftovers lurking in the refrigerator like a street gang just waiting until the door was opened.
The kitchen still smelled faintly of turkey grease, and you'd just stepped on a piece of chewed gristle the cat had earlier- in your bare feet. And you were tired,but filled with a little self-satisfaction that it you'd fooled everyone and managed to pull it off once again.Go you! Time to let Calgon take you away...

Ever since I figured out that Black Friday was created to kick off the Christmas shopping season and I wasn't obligated to contribute to the confusion, I've pretty much eschewed going anywhere near a mall and opted instead for a walk around the neighbor hood or a drive that took me just far enough away from everything that I had distance between me and the scene of the previous day's activity. One year it was a trip down Route 9 through the wetlands to watch the blue herons, stop at the local farmer's market, then lunch lone at the Smyrna Diner; another year it was a drive to the Veteran's Cemetery to sit by the reflecting pond and feed the ducks and geese. There were a couple of years where I worked retail and was at retail ground zero- it was fun and exciting, but I was exhausted and slept through most of the next day, which was basically lost time. Last year I read a book and listened to some Christmas CDs.

The days between Thanksgiving and the First Sunday of Advent have always been days out of time for me. I want to hang onto the Autumn like the last leaf, but I always find there's a point where I, too, finally let go and spiral down, adding my withered spirit to the pile of spent things of the old year represented by  so many fallen leaves. I think I must join the spiritual compost then, because I nearly always feel a bit off and out of sorts, dazed and slightly confused and wondering where the time went.Ruminating  a few days while I put away the last of the Autumn decorations and bring out the boxes of Christmas/Yule/Winter things, I feel better and by the time I light the first Advent candle, my soul begins to shake off the mulch of deadness.
Posted by AmethJera at 3:44 PM