Into The Great Wide Open 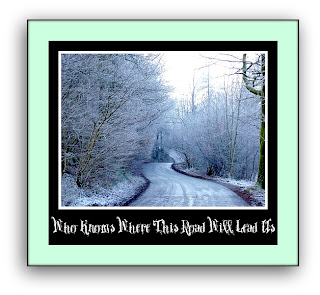 This title of a Tom Petty song has always intrigued me because of it's vagueness. That's how the beginning of a new year is-we have no idea what's going to happen and the future is greatly wide open. Last night I began doing some readings with various decks to peek into the future-to see what's visible through the smoky glass.


While I was researching a graphic for this blog installation, this popped up on my computer instead:

I believe that everything happens for a reason:
People change so you can learn to let go;
Things go wrong so you can appreciate them when they're right;
You believe lies so eventually you learn to trust no one but yourself;
And sometimes, good things fall apart so better things can fall together.

The way the Great Mystery works( for me, anyway) is that you don't always get what you want, but you do get what you need. This appeared on the screen at the right time in the correct place for me this morning, because I am, frankly, not satisfied with what came through last night. The card readings were pulled to lay a foundation for the predictions to follow. I used three individual decks with very different graphics-Mother Peace, The Green Man Oracle, and Star+Gate. Each has it's own specific imagery, and when such diverse images mesh into the same meaning, I know I'm on to something. Sometimes I can make something out of them immediately, sometimes the readings are so unique they don't come together at all. I take that to mean that the readings are indeed still valid, just that the time periods are spread out and linked.Last night, all three not only aligned, they shouted. Three different layouts with three individual decks came back with the same basic message: This is going to be the year when we redefine ourselves. We're going to have to look at who we are with all the trappings stripped away, and in turn, that's going to change who we are as individuals, as a society, and as a country. We have the potential for a new beginning that is going to use the wisdom of the past rather than the knowledge of our own age, and that is going to include a spiritual awakening that will put us in touch with the innermost self and whatever we recognize as divine beyond ourselves. Fate will open and close it's door quickly, so when the individual opportunity for each of us comes, we have to be ready to step over the threshold quickly, or the door will close and the opportunity for change will be lost. These doors will be on all levels and on all planes-financial, personal,spiritual, physical, etc., so the self-examination must be soon and swift...perhaps that's the Universe's way of keeping us from our usual inbred human foot-dragging.

It's a tall order, at least for me. I suspect it will be for you, too, if you're anything like me-prone to sit on things too long and procrastinate, or push it away and hope it will take care of itself eventually. I will do almost anything to avoid conflict these days because frankly, my energy for the fight has flagged...and I know better, I've had psychology classes and attended workshops that assert that conflict isn't always negative and that the catalyst of conflict may be what is needed to get to the next level. My most revered Sensei, Thomas Crumb, has written books on the subject and literally pounded it into my head, but I am still at heart a non-believer because recently every time I have tried to warm my hands at the fire, they have been slapped away.

All these readings have pointed to the fact that we need to look inward and outward, that we need to do self exploration, and embrace something sacred beyond ourselves. I fear the de-cluttering process, and yet I know that spirit doesn't work well  in a messy environment, so I will need to peel away the onion-like layers of my comfort zone before I can bloom like a rose. The fact is that we all have just too much bling in our lives, whether or not we believe that ( I didn't), too much stuff we have been told we needed by the media and the spin doctors, and we have now accumulated so much that we are drowning in it.Our need to acquire the newest and the best has just turned on us...do we really need iPhones with a million apps when all we need is a simple cell phone to stay connected? We've been listening to other voices instead of our own to care for our personal needs, and in the throes of it all, we've lost ourselves...so re-invention is needed, the opportunity is being presented because we now have to get rid of all the excess just to survive.

The cards also pointed to the fact that wisdom and knowledge are two entirely different things, and when we discern one from the other, we can lay the foundation for the required re-invention. I believe this will take place in applying ancient wisdom, looking back to generations before our own, and how they re-invented themselves. Our grandparents came out of a time after WWI to a gradual build-up of financial stability during the 20's and 30's, only to have it all ripped away by the Great Depression, the fall of the stock market and WWII, then again, we as a society gained momentum and once again became affluent.That affluence was defined by what we possessed  and could pay to get... and we in  turn became collectors of stuff. The more toys we had, the more important we were on life's playground.

We are going to be the ones to pull ourselves out of this awful economy...not the government, which is wallowing in a mire of it's own creation. Once again, we are going to have to become cohesive communities out of necessity. We are headed toward the creation of the Village to survive, and that means we aren't going to be able to take care of the rest of the world and put others needs first. That's not being selfish, it's acknowledged that we are  worthy as a people...and the cards made that very plain: clarity is needed to recognize our essential needs for survival; time-tested wisdom needs to be put into place once more; and we will be overseen and guided by a Universal force of protection if we choose to acknowledge it's existence.

It sounds rather common sense. Maybe common sense is what we need because it hasn't been so  common lately.

Otherwise, further meditation on my part in reference to predictions was a little disappointing to me. Maybe because I've been fairly accurate in recent years until last year, when everything except one just went bust. Perhaps I should breathe a sigh of relief on that one, quite a few of them weren't very positive.

For what they're worth, here's what came out of the smoky glass of the future on my part:
I wish there were more specifics and more positive predictions, but I also have a feeling that not everything has come through for the year for me. Remember, nothing is writ in stone-things that come through are simply impressions- and there is a possibility that a negative prediction can turn into a positive one!

Posted by AmethJera at 4:06 PM