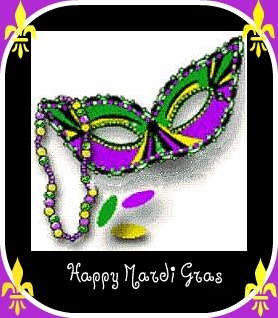 MARDI GRAS is the day before the Roman Catholic influenced holiday of Ash Wednesday, the first day of Lent.
Mardi Gras is the last day of the Carnival season, which  began around January 6th (Epiphany,Twelfth Night or Three King's Day).In the metropolitan Philadelphia area, the Mummer's Parade on New Year's Day is reminiscent of the guisers of  Mardi Gras and shares many of the same attributes such as the fancy jester's costumes, parade floats and merriment clubs or krewes.


While not observed  throughout the United States, a number of cities and regions in the country have celebrations. Mardi Gras in North America began in Louisiana, Mississippi and Alabama as an ethnic French tradition.Similar Carnival-type celebrations occur all over the world and are known as far away as Australia.
The spirit of the day is captured in the Creole French saying, " Laissez les bons temps rouler-Let the Good Times Roll!" The blow out celebrations of Mardi Gras in Louisiana's French Quarter begin with elaborate parades and costume balls. Each parade is hosted by a krewe, or guising club and have their own characteristics. Strings of beads, candies,small baubles and plastic coins called doubloons stamped with the krewe's logo and the parade theme are tossed into the eager hands of revelers lining the streets and taken home as souvenirs.In earlier years the coins were traditionally stamped in aluminum, silver and bronze and are highly collectible. Now they are made of shiny metallic plastic in royal purple, green and gold, the traditional colors of Mardi Gras.
Another charming tradition of Mardi Gras is the King Cake, a decorated desert which is frosted in the traditional colors and decorated with edible glitter, beads, etc. Three charms are baked into the cake for luck- a tiny baby doll, a coin, and a ring. The baby is known as a "King", and is symbolic of the Christ Child; the ring and coin are portents of wealth and fortune. What began as a humble pound cake has now morphed into a ring of buns with cinnamon or fruit and nut fillings, and echo of the fruit cake theme from Christmas.
Gumbo, a spicy sausage and chicken stew (which may also include seafood) is eaten at the end of the day.The word gumbo is a corruption of the African word for okra. The dish reflects the strong African,  Spanish and French influences of the region. The addition of filé- powdered sassafras leaves-is a Native American contribution to the spice mixture added to the stew. Beyond the inclusion of okra, filé powder,and another thickening agent known as roux ( traditionally bacon fat and flour), there are no rules about what goes into Gumbo, and there are probably as many variations of the dish as there are cooks in the region.
The rich dishes traditional to Mardi Gras-most fat and butter laden-have their roots in the ritual requirement of using up all the sugar, fats and eggs in the home, foods forbidden for consumption during the Lenten season of fasting and sacrifice prior to Easter. Lent consists of 40 days of deep contemplation, self-examination and study in preparation for baptism at Easter. 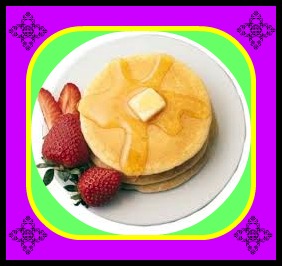 Shrove Tuesday( aka Fat Tuesday) is an  austere alternative to the lavish Mardi Gras celebrations.The purpose is the same-to use up all the sugar, fats and eggs in the pantry before Ash Wednesday, the first day of Lent. Those countries with British or Anglican Church influences partake of a traditional  Pancake Supper on Shove Tuesday, a day where the participants are shriven, or forgiven their sins after confession, repentance and absolution by the Church. Many parishes participate in a Pancake Day run, where the runner must flip a pancake in an iron frying pan during the race.Lent emphasizes eating plainer foods and refraining from those which would give pleasure. In many places this also means no meat as well, so many pancake suppers feature sausage.