Why Wait Til Spring? 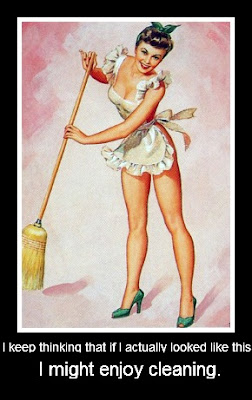 ﻿﻿﻿﻿﻿﻿﻿﻿﻿﻿Lots of blogs about Spring cleaning this week, so I thought I might as well throw mine into the pot, too.
I am not a fan of housework ( raise your hand if you are so the men in the white coats with the nets can more readily identify you). Dust and my sinuses are not on friendly terms, but they do seem to get together to party every now and then, usually necessitating a trip to the doctor for something to take care of the resulting infection. If I were smarter at this cleaning thing, I would clean as I go-wiping off surfaces before they get dusty, vacuuming before there is an army of little bits of this and that on the carpet, giving the floor a swipe with a damp mop just because everyday.

But I'm not. I like to think that it's because I actually have credible activities in my life that prevent me from fussing-that I actually have a life- but the sad little fact is, nothing is preventing me from doing this bit of preventative maintenance.

It's been said that the clearing of physical spaces will ultimately affect the organization of your mind. Clutter is a terrible waste of space, especially if that space is supposed to be vacant. Staying in the mindset of the way I was raised however, space is there to put stuff in. That's why it's there. It's empty, you fill it. Simple, no?  I've tried to adopt the Japanese way of home decoration-creating empty space around specific items so they are more meaningfully showcased. The problem here  specifically is  that I wasn't raised in a Japanese household, I was raised by folks who went through the Great Depression and therefore saved everything.

The result of living through the Great Depression was that you kept everything that came your way because your literal survival might just depend on it one day. Everything that came through the door-particularly if it were free- was a real 'find', a gift from the gods of plenty. There was never enough of anything and everything was in short supply. Consequently, nothing was ever thrown away: it was wasteful and shameful and down right UnAmerican. Throwing away a perfectly good anything could get me an ass-whooping of epic proportion at my house. Even if you didn't need it now- you might in the future and you wouldn't have it- or someone else might have need of  it and therefore you could be a good neighbor by supplying whatever it was. It was actually prudent to think that way and has its merits...within reason.

My grandfather never turned anything down. Anything. And  he was damn proud to be able to produce whatever it was if someone else happened to be looking for 'it'. He was buddies with another elderly Sicillian man who owned the salvage yard, and on Sunday afternoons he'd go off and drink lemoncello, smoke rank stogies and bond over the fact that both their fathers " came over on the boat." And he would come home with some of the most remarkable things-old wooden doors, lengths of lead pipe, discarded two by fours, partial boxes of ten penny nails, rusty tools, odd packs of roofing shingles and homeless units of (formerly) built-in shelving....most of which were still taking up real estate in the basement when he died. Guess who got to sort through it to throw it all away after my Grandmother died and I inherited the house?

I realize that Pop was just trying to be a good provider and keep us from ever needing anything. Recalling the harrowing experience of shifting through his collection of basement treasures is not meant as criticism as much as issuing a warning: if  it's stored it, someday you will have to discard it. And it's easier to say "yes" than "no", so at some point you, too will be faced with the same task... and looking for an empty spot on the wall on which to bang your head as you try to figure out what to do with it.
No wonder that I always felt somewhat befuddled and confused when I was in my 20s and 30s. It took until my 40s to take to heart the lesson that if your world is cluttered, your consciousness is cluttered also. There was always a feeling of chaos in that house for me,and whenever I did a major cleaning I always felt as though I was throwing away a part of my childhood. And I was.There is a time and a place for everything, according to the wise council of Ecclesiastes:When no longer a child, it is time to put away the things of a child. I beg to differ with the council fully: Get ride of what you no longer need, but never surrender your wonder,curiosity or ability to be satisfied with something simple or revel in pure delight.

When you have created your own space, you feel much more comfortable with all the stuff you have to put up with from the rest of the world. Four years ago, when I was moving for the third time in seven years ( after having lived in the same house for 40 years) I became aware of how much stuff I had collected on my own and how much I had to weed out to go to the resale shop just prior to what my friends call The Great Southern Migration.


There was a lot. I had to give up a couple of the things  I truly wanted to keep- my great grandmother's book rack, an antique table from a church that I bought for $5 at a yard sale, three nearly new bookcases, the garden glider I was using as a couch in the living room. They were things that wouldn't fit into storage, and I was torn to loose them. The bright spot in this is that none of it is irreplaceable in the larger scheme of things, all could be replaced...someday...if I so choose. I am not a prisoner of my stuff and I realize that I couldn't keep it all. Besides, I still have the memories...I didn't give those away. I have more of an appreciation now for the few things I did keep.

Even more important than clearing out my material possessions is the fact that I have been able to develop a space for my personal awareness. I have begun to think about who I authentically am and the way I would like my life to be. There are subtle levels of being  that there was no room for before. There are things I know I will never have enough of-money and love being two in particular- but I'm working on it. I have faced the fact I will never be rich. Love is wherever it finds you. Right now there is enough for me to be comfortably satisfied, and it's all I need.
Posted by AmethJera at 3:21 PM