It's Called a Uniform for a Reason! 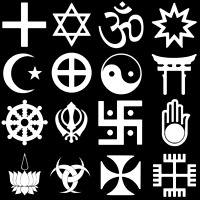 "After facing consequences for refusing to cover or remove their crosses at work, two Christian women are taking the case to the European Court of Human Rights. A group of ministers is set to back employer regulations banning religious regalia in the workplace, arguing that wearing crosses aren't a "requirement" of the Christian faith"

Here's the link for the story:
http://www.huffingtonpost.com/2012/03/12/do-christians-have-right-wear-cross-crucifix-british-government-trial-case_n_1339460.html

As a paramedic, I wore a standard medium service blue shirt with navy blue pants. On that shirt were patches that identified me as a licensed EMS provider by the Department of Health in the state I worked in, and a small curved 'rocker' patch which identified me as an instructor. I wore rank insignia on my collar and epaulets. On occasion, when in full class "A" uniform I also wore a formal dress jacket and a hat. I was permitted to wear tiny gold or silver ball earrings as a female. I could have worn a simple chain necklace, but after the first time a hallucinating patient grabbed the chain and tried to choke me with it, I never wore a necklace while on duty again. HR changed later the policy and prohibited necklaces altogether. No one complained because we knew the policy was in our best interest, and we figured that none of our patients actually cared if the medic who showed up at 3 a.m. was a Christian, Muslim, or Jew, as long as that person was reasonably competent.

Later, as a minister who wore clericals,which are technically a uniform, I eschewed wearing a cross necklace as a matter of personal preference. The diocesan Bishop wore a pectoral cross, but the rank and file clergy seldom wore anything. Most of us figured there were enough crosses and other symbols emblazoned on the ritual vestments we wore during worship services, so we didn't need anything else dangling from around our necks. After all, the purpose of wearing clericals were to identify us as ordained ministers, not for individual expression: we were supposed to all be equal in the eyes of God.

The thinking behind uniforms is pretty much universally the same. If you are a flight attendant, then you wear the uniform issued by the airline so you can be recognized by passengers. As a nurse you may have a bit more choice in the pattern and design of your uniform, although some hospitals now require employees to wear a standard color by position. At any rate, you are still wearing a uniform and there is a dress code prescribed by the facility where you work, and everyone is required to comply.

This is why I am stymied by the claims being made by the two ladies mentioned in the Huffington Post story that their freedom of expression and religious rights are being violated. If I were working in such a uniformed service position I would understand why I couldn't wear a pentagram or goddess symbol, and the possibility of discrimination would never cross my mind. It's called a uniform for a reason.


Bottom line, ladies...You chose to work in public service positions. There is a uniform standard in each, and that rule is no religious emblem on display while on duty. It's not about your rights. It's about departure from the uniform standard.

Uniforms are standard for a reason-so everyone is equal in dress and appearance while serving the public in an identical capacity. You were hired as a nurse for your knowledge,or you were hired as a flight attendant for your skills, not because of the deity you worship ...So it is NOT NECESSARY for you to represent yourself as anything other than who and what you are while on duty. Your religious preference is a moot point at 35,000 feet in the air or rendering care in the ER. Your religious preference is between you and whatever deity you worship.

YOU are the ONLY person to whom this should matter....unless, of course, you are proselytizing...and the face is, that even if you never hand out a single religious tract, the mere fact you are representing yourself as a Christian, Muslim, Jew, Buddhist or Pagan in public means you are seeking recognition of that by others.

While I belief that anyone should be free to wear an emblem of their chosen faith, no matter who they are and no matter what deity they worship, when you agree to take a paycheck from an employer who requires employees to wear a uniform that freedom ends for the time you are in uniform. That means no religious medals and pendants, no jewelry of any kind whatsoever- unless your employer makes the exception that is spelled out in the employees handbook. As an individual, if you actually feel you have a 'need' to wear an emblem of faith to 'remind' yourself how you should properly behave as an adherent of that faith, or to proclaim your personal relationship with G-d to the world, then it's my opinion you have a few things to work on in the areas of motivation and spiritual maturity.

Posted by AmethJera at 4:44 AM