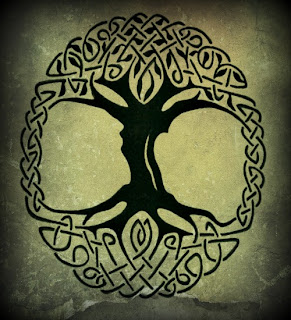 Kindred: a clan, group, tribe...mortal or other-world being. In some traditions the definition extends to creatures of Earth, and those not so earthly. The term exists in both Celtic and Native American traditions, and probably elsewhere that I've never heard of, but the word has always given me a feeling of familiarity and comfort. It's on of those words that is very old and makes one feel rooted where they are.

In the blended folk tradition of my personal practice, I welcome the Kindred from the multiverse to witness my rituals as a courtesy:

"All you who are above and below, in earth,sea and sky, human and animal, growing things and things formed millions of years ago, I welcome that spirit with you as Kindred..."

You never know when you might just need to draw on them for a special favor, and I think it's just a nice idea to be on good speaking terms with the other inhabitants of whatever realm you happen to be operating in at the moment.

Drudic traditions have a special place in their worship for the Kindred. Within the cosmology of the everyday, the Kindred are recognized and given their due.( http://www.adf.org/articles/cosmology/worlds-kindreds.html ) All beings are Children of the Mother, all within our wondrous Universe are relations, we are indeed connected by a Web of Life according to those assigned to pass down the histories of all those who have ever lived.
Posted by AmethJera at 1:35 AM