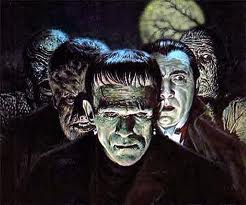 In the golden age of film, Universal Studios made a name for itself through a series of films portraying legendary monsters: Dracula, Frankenstein, the Mummy,Wolfman,the Phantom of the Opera and the Creature from the Black Lagoon. The acceptance and popularity of these mythical creatures were due not only to the need of the public for escapist fantasy in a stressful period, but because on a subliminal level the fear they generated expressed that of the masses during a time of war and economic upheaval. Life was uncertain and overwhelming. Society had need of something sinister, something or someone not resembling us as human beings on which to blame our anxiety. In one gigantic episode of corporate denial we could point out that it was the monsters that caused our fear, and not our own actions which impacted our lives

Flash forward to the present: wars, an unstable economy...everything old is new again...with a twist. Our current favorite mythical monsters-the worst case scenario of what it means to be inhuman - are zombies. They are characterized by unspeakable acts of violence and gore and are by all accounts unstoppable. And they eat our brains, the seat of of self awareness, the place where we store intelligence. They wrought the most unspeakable act of terror upon us by mindlessly making human beings into meat. Reanimated decomposing humans eating living human beings recalls what is the beast in us, devoid of conscience and wholly evil...and it horrifies society to think we could be  capable of such, even when applied in a fantasy setting. Psychologically are multiple layers of fear and disgust to apply to the concept of zombism. That is why the recent onslaught of murders currently in the news accompanied by acts of cannibalism is so frightening. We deny that any human could do so disgusting to another, so it must be proof that the Zombie Apocalypse is upon us.

The distressing  actions of the late Rudy Eugene will forever seal his legacy as a monster. The 31 year-old Florida man literally destroyed the face of a homeless man by tearing out chunks of flesh with his teeth. The media, ever ready for the latest out-of-the ordinary news, sensationalized the story to the 'nth' degree by dubbing it a cannibal attack, capitalizing on the current fascination with all things zombie in pop culture.

Friends of the deceased were quick to note that he carried a Bible around and quoted scripture, attempting to frame him in an acceptable characterization. Family have admitted that he was attempting to get his life back together after a less than exemplary period of behavior which included (allegedly) holding a gun to his mother's head and threatening to kill her. Existing police records show a yet another picture, that of a repeat criminal offender who earned the dubious distinction of being the first person in Florida to be tasered by officers during a previous encounter with law enforcement. His girlfriend thinks someone used voodoo on him. That's all the flying monkeys of the press needed to hear to fire up the whole zombie connection.

Authorities have made an educated guess that Rudy Eugene was more likely under the influence of a street drug known as 'Bath Salts' rather than a curse. 'Bath Salts' ( aka as 'Bliss', 'Ivory Wave' and 'Vanilla Sky') has been sold legally in corner stores and other out-of- the- mainstream places noted for their character, such as truck stops. It is advertised in a clandestine manner so as to be available just under the legal radar, but just as I am sitting her writing this post a news alert came up saying that it has been banned in the U.S. (http://www.recoveryconnection.org/recovery-blog/substance-abuse-2/bath-salts-banned-nationwide/# ) Which, of course, doesn't mean it's use will stop any more than any other substance. If an individual is driven to get high, they will find a way to get high-and will go to extraordinary lengths to do so. Their attention is so riveted and polarized to the present moment that the threat of frying their brain isn't a deterrent.

The psychosis caused by Bath Salts is impressive. Toxicology experts have stated that the high of the drug resembles the hallucinogenic/delusional properties of LSD, the often violent agitation of PCP and the stimulant effects of methamphetamine, in concert, meaning the worst aggregate of features and traits of all of the above  in one. An ER physician I spoke with the other evening while I was pulling a chaplain sift told me that users are not controllable with the use of standing treatment counter medications such as Diazapam- even in high doses. From personal experience as a medic who has administered my share of Valium in the course of emergency care, a 10 mg. shot will lay out  a 250 lb. man in full blown combative psychosis in under a minute. This is not true with Bath Salts, according to my physician friend: it takes multiple high-level doses of several sedatives-which of course have their own dangerous effects. This some serious shit, folks.

Which leads me back to the subject I really intended to address which was not drug abuse, but the intimation that Ruby Eugene was under a voodoo curse. According to the Huffington Post, his girl friend stated that either he was unknowingly drugged or placed under a Haitian Voudo curse (http://www.huffingtonpost.com/2012/06/01/who-was-rudy-eugene-bible-arrests-voodoo-vodou-curse_n_1562518.html ) She was very specific about the source of the alleged hexing, which makes me think that she's unintentionally incriminated herself as to some of her and/or her late boyfriend's clandestine recreational and/or religious activities. I'm not implying there is anything nefarious about Voudo as a magickal practice because it is indeed a very legitimate and wide-spread religion rooted in the African diaspora of Haiti. It is just as authentic as any other faith tradition in my book.And just like everything else, it's how it's used that determines if it's positive or negative. However, given that Rudy Eugene and as far as I can tell, most of his closest cohorts were Bible toting Christians, I find his girlfriend's statement concerning Voudo rather curious. I mean, personally, I would go for the drug angle-which would be more believable-than to attempt to explain away his despicable behavior by attributing it to being cursed. 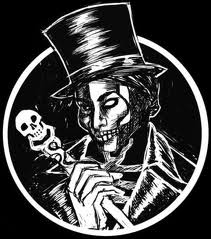 What makes her explanation incredulous to me is the fact that nearly every outrageous act of violence one individual inflicts upon another in the State of Florida is reported by the media as attributable to a Voodoo Curse. It makes me wonder if this phenomenon is due to the religious prejudice of the fundamentalist Christian stronghold in that area, or simply due to society's ignorance of what is not sufficiently understood.

Enough already... Let's stop blaming indigenous faith traditions that are largely a mystery to the general public for contributing to personal misfortune. We create our own monsters, whether in our minds or in reality. Let's try a more refreshing approach like, say, lack of individual responsibility and leave the religion-and the zombies- out of it.

Posted by AmethJera at 4:54 PM