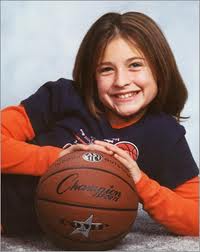 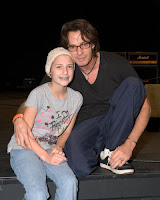 When 13 year old Sahara Aldridge of Cape Girardeau, MO subcombed  to a malignant brain tumor nearly five years ago, her parents Shannon and Amy decided to create an event that would bring the wider community together to raise funds for the pediatric brain tumor research program at Lucile Packard Children’s Hospital at Stanford University, where their daughter received outstanding treatment and care.  The Hoops for Life 5K Run/Walk was inaugurated in 2010 and  raised $7,500. The next year they raised over $9000, and they hope to top out around $10,00 this year.http://hoopsforlife.net/

In four days, I'm on my way to Cape Girardeau,...by Greyhound Bus...Sigh. I swore off  cross country bus trips when I was a production assistant a few years back. But it's the only affordable  mode of transportation my all too skimpy budget will allow for these days, and I don't want to miss a thing. I was invited to this year's event by Amy Aldridge, and because of the generosity of  some pretty special people who are life-long Rick Springfield fans, I'm going to be there. ( You all know who you are. Once again, thank you.)

I cannot not be there.  I remember reading a heart shattering plea for prayers from Rick Springfield on his official website when Sahara was first diagnosed with a gliblastoma.  All he asked for were prayers-and nothing else- for a little girl who fell in love with him while he was performing in the MGM Grand show EFX ALIVE  in 2002. Sahara had a brilliant smile and a charm that set her apart, and she and Rick became fast friends during Amy's frequent trips to Las Vegas.

From the perspective of an outsider, I have to say that Rick's fans aren't just loyal to him,they're loyal to his causes, so when he went online asking for them to pray for a miracle they did...and more, because miracles take a lot of work-and in some cases a lot of money for medical bills.  As a fan, I can honestly say-and proudly-everyone opened their hearts to Sahara with an outpouring of prayers, donations to help cover her mounting medical bills, gift cards to cover essentials while Sahara and Amy stayed at Ronald McDonald House in Houston while she was treated at MD Anderson Cancer Center. There were stuffed animals and toys, craft supplies...and Starbucks cards. When MD Anderson reached the extent of their capacity to help, Amy and Shannon weren't content to take their daughter home to die, they got online and found an experimental form of treatment offered by the Lucille Packard Children's Hospital at Stanford University. The treatment looked promising, and after surgery to remove the majority of the tumor, things were hopeful and the future was a reality.

At home one evening, Sahara quietly died. Shannon said he believed she was so weak from the intensive treatment that her body just simply gave up.

Many of us followed Sahara's fight on a blog maintained by the wonderfully witty and warm Pamela Yeager at http://www.saharaaldridge.blogspot.com/ Not long afterward, Rick Springfield and Matt Bissionette wrote several songs in her memory-" God Blinked", "Oblivious" and the most notable, "Saint Sahara":

Come on, close the book
Turn out the light.
Put your plans aside tonight...
Oh, I know it's not wrong, but it sure isn't right.
An angel bids her last goodnight to us.

Come on, Sahara, give us that smile-
You walked this far with us.
Let's walk one more mile.
Oh, Saint Sahara
Beautiful Child
You left us all wanting
You left us beguiled...*
*from the album Venus in Overdrive,copyright Rick Springfield,all rights reserved.

Sahara became everyone's little girl in the same twinkling of the eye you see in photos of her. She would be turning 18 on the 24th of July-just a few short days away. Her high school class has just graduated. They remembered her with a basketball, and a jersey with her number "21" and nickname " Hoops" on it. Her mom is working on legislation to put a box on Missouri income tax forms for an optional donation that will go to pediatric brain cancer research. They're calling it "Sahara's Law", and it has good, sound backing by local politicians.

July 21, over 900 people from all over the United States are participating in the Hoops for Life event, and later that evening, Rick Springfield is headlining a concert to benefit pediatric brain cancer research.

I am tickled to be spending time with my Rock Star Muse, but as it turns out, he's just icing on the cake because the day is about Sahara- all about Sahara-as it should be....and I dare anyone to try to make it into anything other than than.  Because this is  strictly Sahara's day.  I am personally willing to make it an affair to remember for anyone who is selfish enough, foolish enough or just plain dumb enough  to try to steal her thunder. There is a legion of us still willing to fight the good fight for her and those to whom she leaves her legacy of strength and hope.

So until next week, Broom With A View is officially on hiatus and on the road, with a mission.

Posted by AmethJera at 4:18 AM