Meanwhile, On The Horizon 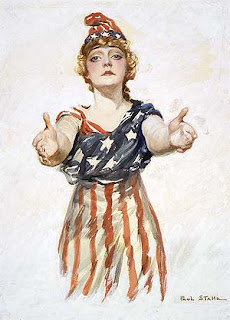 Thank the Gods the election is OVER!

Honestly, I am all for the electoral process. I am thrilled to be a citizen in a country where I can vote for the candidate of my choice and not have to literally take my life into my hands and suffer physical violence for the simple act of casting a ballot. It is an imperfect process and an imperfect system which makes me no less  proud to be an American.

What makes me cringe, however, is the behavior of some of my fellow Americans on both sides of the fabled aisle. The over-all level of mud-slinging preceding this election has been some of the nastiest and distasteful and elevated stripping the dignity of others to a new high. The lack of personal integrity-not just of the politicians and their minions, but the public in general- has been embarrassing and disheartening.

I am not naive. I have been participating in the political process since the age of 18, both as a voter and as a sometime party volunteer. I do not look upon the process with rose-colored glasses, and I have glimpsed the underbelly of politics first hand when my grandfather ran for the senate years ago
(and was essentially screwed by his best political party buddies, thank you.) I know it's a what's-in-it-for-me constituency. Humans are a self-serving and selfish lot. Duly noted.

However, I draw the line when the snark reaches the super-sonic levels it did during this election, when I am told by candidates that as a woman I am too mentally deficient to be responsible for my actions in everything from choosing which health care procedures I will and will not undergo to defining whether or not I have been sexually assaulted...and what I should do afterwards. I draw the line when my chosen and carefully created form of spiritual expression is negated and I am told there is only one acceptable model of religious expression... or else. I draw the line when I am told that I am not enough and therefore not worthy of the regard of the almighty ones who make the decisions in our society.

It is when I have had enough of this kind of abuse by those seeking office that I will march my not-so-delicate lily white, female, witchy little Pagan ass to the polls and remind the politicians that they are PUBLIC SERVANTS and therefore serve the citizenry, of which I am a card-carrying member by casting my vote ...which will either allow them to remain employed or replace them with someone who has a better grasp of what We The People really want.

In every election there are winners and losers, and it really is okay to celebrate a victory or mourn the loss- as long as we don't gloat or whine too much at the expense of others. I sincerely believe we can do that without ripping apart someone else's character and stripping them of their dignity and self-esteem to make ourselves feel superior. I also realize that I may be alone in that feeling, but I still refuse to stoop to gutting another person just because they have different beliefs and hold a totally opposite political point of view...even one I personally find troubling...because I believe that celebrating diversity is more than just so much lip-service.

The election is over, folks. It's time to stop the celebration, sweep up the confetti, finish eating the crow we were served, or licking our wounds and move on. Right now in particular, we need to buckle down and focus our energy to fuel the skills and fortitude that is needed to put parts of this country literally, physically back together for the health, safety and welfare of millions of our fellow citizens hard hit by Hurricane Sandy. In the greater scheme of things, all the hype and unadulterated bullshit surrounding this election pales by comparison, because in the end, we are all Americans.
Posted by AmethJera at 4:00 AM