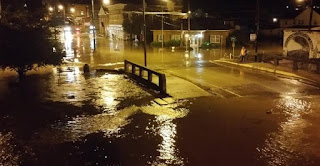 The water spirits need to head out West to California and stop splashing around my little town. It has rained nearly every evening around 4 p.m. for the last two weeks, and I don't mean just a sprinkle. I'm beginning to think I live in Hawaii because it rains so often. This is Southwestern Virginia and not a tropical paradise.

While I'm up for a good healthy rainstorm, we've had more than our share: the water table is full. The aquifers throughout the mountains are weeping and there are mini waterfalls everywhere there are rocks. While this makes for a picturesque landscape, the Kodak moment we had during the rain on Sunday evening gave us more than our money's worth. Not only did the creek rise up several feet in a couple of hours, it spilled over the top of the canal and flooded the main roads through town. Some of our more fragile older buildings were threatened with the possibility of being washed off their foundations, while others sustained water damage. There were mudslides and falling rocks, trees downed by swiftly running water, flooded basements and living rooms. Our meagerly staffed volunteer fire departments were out until dawn the next morning pumping out flooded buildings and otherwise trying to control what Nature wrought.

Good luck with that, guys. Controlling Nature is like sewing Jello; it can be done, but it's a specialized technique. I am not a weather worker. Ive known others who claim to be, but they say it's dicey business to do this type of spell because of the sheer scale of the working. Changing weather patterns don't just affect the area you are in because most workings simply shift the storms and send them elsewhere. In effect, what you are doing is the weather magic version of NIMBY (Not in my back yard). Weather working is a grey area in the magickal community, and I admit that I'm on the fence about doing this because if the spell should happen to work, you could be causing a lot of problems for others.

Personally, I would try a protection spell instead of trying to stop the storm. In my own mind that would be a more ethical thing to do: let the storms come, but keep me and mine safe and out of harms way. Protecting my home from danger is not changing the course of the weather and I am comfortable with that.

I would also suggest attempting connection to the devas or genuis loci of the area. If you live in that particular area and have already bonded with the nature spirits, this should not be difficult. Asking for protection should not entail anything more than a simple request and payment with a favorite offering. Notice I said request; it is quite foolish to make a demand of any elemental being. They are somewhat unpredictable- and often mischievous. I wholly recommend staying on the good side of any spirit of place where you live...or you may live to regret trying to impress them with your witchy self...because you won't. Just trust me on this one, okay?

One theory about genuis loci are that they were created by the Universal Source shortly after the formation of a particular place and assigned guardianship over that area. They are earth spirits which imbue an area with their character and visa versa. One does not exist without the other, and if an earth spirit leaves the area or is driven out, the blessings of the area are withdrawn and the essence of the place dies. The desertion of a place by its individual earth spirit may potentially open it up to occupation to sinister, negative forces. There are many legends of this type, especially in the South, courtesy of the superstitious Scots and Irish who immigrated to the Appalachians.

But I digress. Earth spirits are best contacted through meditation: sitting quietly and feeling their presence. You may also try a gentle conversation. Most earth spirits are sentient beings. Leave a small token offering when you go. Coins always seem to work; whatever is left, let it be something of value. A tried and true standard is a bit of milk and honey; there is a possibility that the 'earth spirit' you encounter is a member of the Fae Folk. When you have gained the trust of the entity, it will reveal it's identity to you and thus identified, you will know how to proceed ( cautiously) with further contact. Keep in mind that most, but not all earth spirits are benevolent, positive beings. You should ward yourself prior to contact, and if you have any doubt as to what or whom you will be dealing with, secure yourself inside a cast circle ( and stay there!). A benevolent entity will be appreciative of your preparation and established boundary, but always have a plan 'B' (As in binding and banishing. Remember, never call up what you cannot absolutely put down, and don't be over-confident of your abilities). Don not follow any entity that beckons you. Do not be lured out of the circle. Other than these few suggestions, things should go well and you can discern how to go about asking the earth spirit for its assistance in your goal.