It's a Little Early,But Let's Talk About Halloween and Samhain... 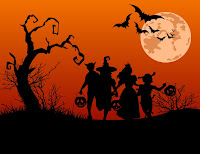 It's a little early, but let's talk about Halloween...mainly what it is and isn't.

When I was growing up Halloween was a night of wonder and magic. For one thing,we kids were allowed to go around the neighborhood collecting treats without an adult if someone's older brother or sister was along.We felt special and the night had a slightly dangerous edge to it; the danger was all in our imaginations-at least that's how it used to be. No one dressed up like a serial killer, or politician, and if we managed to score a Collegeville costume of a nurse, police officer or G.I Joe, well...let's just say we ruled in the cool department.

Somewhere along the mid 70s things began to change. Costumes with the hard plastic mask disappeared and the characters got bloody: gore became a thing. Decorations changed, too with the introduction of vinyl severed body parts and plastic window clings. The inexpensive paper euphemial hang-up skeletons disappeared in favor of more realistic-and expensive-fare.

My childhood Halloween included homemade cookies, slices of cake, and mini cups of cider. A candy apple or popcorn ball was a major score. Much of the candy and gum we got was loose and some of it wasn't even wrapped. We went inside people's houses to see their decorations and if our parents were along, they chatted amicably with neighbors. It was all pretty much over in and hour or so and then everyone in the neighborhood went to the firehouse for a community Halloween party.  Afterward we went home, emptied our loot bags and went to bed because more than likely it was a school night even if it were Halloween.We were home snug in bed before the Witching Hour. No one was afraid of getting tainted candy or poisoned apples. There were no weird clowns lurking by the roadside or other nefarious characters up to no good. It was all good, clean fun-there were no extremist Christians bellowing about it being Satan's Day and no one got possessed by evil spirits just for dressing up and collecting candy on a day made for innocent fun and frolic.

Because I am now a practicing witch (and don't just dress up like one as I did as a kid), I celebrate Samhain as well as the half octave of days made up as Mischief Night, All Hallows, All Saints and All Souls, this time of year has a new and deeper meaning. Samhain, as Summer's end, is the final harvest of Autumn and the time when the Veil is fully open between this world and the Afterlife. I welcome my beloved friends and relatives who have made their transition at my home Dumb Supper and by meditating to bring them closer. I decorate my ancestor altar with as many photos of them as possible and a few of the things that hold their memory dear to me. This includes photos of the many pets I've had throughout my life and my much loved familiar Tinker. I write regrets from the previous year and burn them, then bury the ashes. I make a batch of Samhain oil to use for spirit communication in the year that lies ahead, and a special incense blend to use over the next few days because I also celebrate astrological Samhain on November 7th (which just happens to be my late grandparent's wedding anniversary,too). Every year is different because I always find something else to add to the ritual. At the end of the night, after I have cast a protective circle, I sit in silence and listen for the voices of my ancestor's and the Mighty Dead. I ask to communicate with them in my dreams,too, or if I can stay awake until morning, I bid those who have crossed over for a visit farewell and godspeed.

While the two holidays are intertwined and difficult to separate, each has its own distinctive character. I love them both!

Posted by AmethJera at 8:47 PM