What The Pagan Public Will Allow 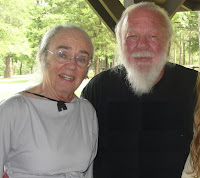 Pagans are generally a tolerant bunch. My personal interaction within the community overall has been positive. I suspect this is because I consider myself to be a freethinker-but I have my limits.

Having said that, I draw a line just short of Gavin and Yvonne Frost and their version of Wicca, which includes ritual sex with minors. If by chance you are unaware of the fact that sex with a minor is against the law, not only is a crime, it also has corruption of a minor as an accompanying charge in most cases, and a few others as well, depending on the jurisdiction. Not only do we not need this sort of thing in Paganism from a public relations standpoint,it's legally and ethically wrong.

Minors cannot give legal consent to have sex, period. There is no valid argument in favor of this sort of activity, despite adjurations that it's just ancient history. While historical accounts of sex with minors do indeed exist, and it was considered morally acceptable in that period, it is a part of the past which is socially unacceptable in our present time. No amount of backpedaling or psychobabble paints this activity as acceptable in modern Pagan culture. More of us should be speaking out about and against it.

I personally believe placing it in the context of ritual is deplorable and heinous as well. We cannot and should not condone or tolerate this, even in a culture of freethinking or in the name of religious belief.

I disagree with those who think that Paganism means "Anything goes". There are ethical boundaries in every culture and religion. I think we should stand for something and not fall for anything that comes along without discernment. "Live and let live" stops here. Reprehensible behavior of any kind should not be tolerated in our community because what we allow defines who we are.

Gavin Frost made his transition recently, and while I wish him well in the next life, I think he may have a few things to explain about his beliefs to the God/ess of his understanding. I extend my sincere condolences to his loved ones...but I cannot and will not condone his behavior and will not support those who continue the reprehensible abuse of children and teenagers.

For further reading, I suggest you read this spot on blog post by Shauna Aura Knight at Pagan Activist which pretty much says it all for me:https://paganactivist.com/2014/08/25/the-frosts-and-consent-culture/.
Posted by AmethJera at 12:30 PM