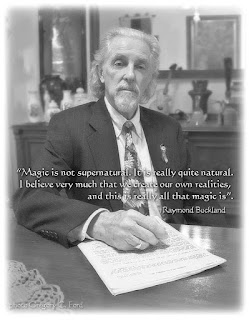 Much has been written on the recent passing of Raymond Buckland. Love him or hate him, he did introduce an organized tradition of Witchcraft in the United States at a time when things like that just simply wasn't done. He never tried to hide the Craft by dressing it up like something else, and he was the closest thing to Gerald Gardner we had in this country.

To say he was a prolific writer is, well...an understatement. He held a vast knowledge of varying subjects, from the Craft to Spiritualism, divination,liturgy and ritual...and magick. He wrote a wide array of fiction novels, and played jazz music professionally.

I chuckled along with everyone else at his ritual micro-management, " Stand here...Do this....Say these words...". Give him props for being so serious about is spiritual path that he wanted to get it right- his way, of course- just like the rest of us. While others found his continual reference to another of his books in the middle of a passage annoying, I would dutifully jot down the title of that book and look it up after finishing the one I was currently reading.

It's not that I was 100% sold on doing things his way, because I'm not...but I have the utmost respect for his place in the history of the Craft.  I found him most approachable; over the years I would shoot him a personal message on Facebook about something, and within a day I'd have an answer. His tone was always that of the gentle teacher. He was most gracious with his answers, and always humble.

Yes, in the early days after the Craft went public, he did come off a tad bit homophobic sounding about male/ female polarity in magickal work, but I think this was because he was so adamant about keeping things balanced. His opinion softened and changed, as he admitted,when he realized it had less to do with actual gender than sacred sexuality.


He was vibrant and active until the end, and I like to think that a gentle breeze stirred the Veil and he simply stepped through to the other side when it was his time. Just a little diversion from his routine, and he went off to explore the Great Unknown, with the full knowledge that he'd be back someday.
I believe he will- not that he ever really left. I think he's going to live on for decades to come. In fact we'll hardly realize he's gone unless we stop to remember his quiet crossing.

Goodbye for now, Uncle Ray. See you around.
Posted by AmethJera at 7:24 PM