Was That A Banshee I Saw You With Last Night ? 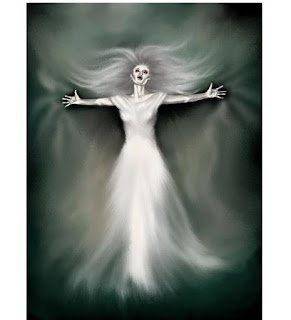 One of the things I love most about Celtic/Irish mythology is its deliciously endless array of maleficent creatures. Culturally, the traditional Celtic lands are the main contributor to our Halloween lore and traditions.

Many of our iconic monsters sprung from the mind of Irish authors such as Bram Stoker (Dracula) and Scottish writer Robert Louis Stevenson (Mr.Hyde).
Others came directly out of the stories of the common people, such as the wailing Banshee,  the Kelpie , Balor the Demon God of Death, and varieties of Sidhe (fairy folk).

Some legendary creatures specific to Celtic lore have their American counterparts, such as the Dullahan (dark man), the Irish headless horseman whose equivalent in the US is the Headless Horseman of Sleepy Hollow. While the motif of headless horsemen is pretty universal, owing to the numbers of stories world wide, it is the character created by Washington Irving that stands out.


The most readily recognizable creature owing to Celtic lore is the Banshee. Always a female spirit, hearing her wail turns the blood cold because it forewarns of a death. Sometimes she arrives in a ghostly death coach ( or the coach rides by alone without her-another legend). Her appearance varies from beautiful and youthful to being a terrifying old hag depending on the source. She is sometimes accompanied by a black dog. Her screams are particularly piercing in the lonesome countryside.

Equally famous as the Banshee is the Kelpie, a shapshifting monster most often seen as a horse. The Kelpie inhabits the area around bodies of water and the sea, where it entices unsuspecting victims to hop on it's back for an innocent ride that always ends with the creature running into the water, where they are drowned. Kelpie have also been seen to shapeshift into the form of a handsome man, identified as the monster in disguise because of the wet seaweed in his hair.

Descriptions of Balor, King of Demons, also vary by source. His most infamous personification  is that of a giant with one leg and one eye. Balor is able to kill by fixing his victims with his 'evil eye'. By legend, Balor is King of the Formorians, a race of supernaturals. Balor is eventually killed by Lugh of the Long Spear after Lugh becomes King of the Tuatha de Danann. It is thought that Balor is the inspiration of Lord Samhain, a fictitious character in Ray Bradberry's classic children's book The Halloween Tree.Not all faries are friendly toward humans. There are a multitude in Celtic mythology that are not, too many for discussion here other than in general terms. Scottish folklore divides them into The Seelie Court (good) and Unseelie Court (maleficent). A well known method of honoring faries or quelling their wrath is to leave them a bit of milk and honey. In his widely known classic Irish Fairy and Folk Tales, W.B. Yeats further divides them into Trooping Fairies, groups which travel in elaborate processions, and Solitary Faries, which appear spontaneously alone with mischievous intentions. The latter are the creatures which often lure unsuspecting humans to the Underworld through invitations to dance and share a meal. Those who partake of fairy food , it is said, never leave. A third type, familiar to anyone who has been a member of the Girl Scout movement in the United States, are Brownies-household spirits who favor children and perform domestic duties.

If you have seen the outstanding 1990 movie Ghost (starring Patrick Swayze, Demi Moore and Whoopie Goldberg) then you are familiar with the Sluagh-the malicious spirits that  about like flocks of birds, seeking out the dying and dead. In the scene where Demi Moore's character is attacked, her ghost lover causes a window to shatter and kill the attacker with shards of glass. As he is seen dying, an eager group of screeching shadowy figures suddenly swoop down and carry him screaming away with them to Hell. These figures, which many who have seen the movie  believe are demons, are more accurately a group of  Sluagh, who are the spirits of unrepentant sinners. Folklore belief is they come from the West ( the traditional place of the Dead), and in many Irish households, the western facing windows of a house were kept closed at all times to keep the Sluagh from carrying away the dead.

If you enjoyed reading about these mythical Celtic creatures, you may want to explore more on your own. There are many books on the subject, but I suggest you start with A Treasury of Irish Fairies and Folk Tales (an anthology by various authors) and W.B Yeats' Irish Fairy and Folk Tales.