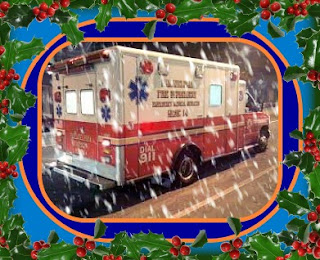 Every episode of the 1980's police show Hill Street Blues would open with the morning assignments and dismiss with Sergeant Esterhaus' fatherly admonition, " Let's be careful out there." If you have never worked in Emergency Services as a police officer, firefighter or paramedic, you really can't appreciate the brevity of those words, which is private insider jargon among those who serve, protect and render aid. What it actually means is, " You are what stands between a world filled with all matter of danger and another human being who needs your help. Today you maybe be someone's salvation, but  you may have to sacrifice yourself doing that. Let's all come home alive." Dramatic sounding words which describe perfectly every single day in the field as a cop, firefighter or medic. I know, because I was a paramedic assigned to  the Tasker Housing Project of Philadelphia for nearly 20 years. The Tasker Project was little more than a war zone between African Americans and 2nd and 3rd generation Irish that lived in close quarters in an extremely poor part of the City of Brotherly Love near Gray's Ferry Crossing of the Schuylkill River and the old Arsenal. The battles were daily and the assaults often: all of the Housing Police, firefighters and medics knew each other on a first name basis...so did a lot of the residents. They saw us that often.

In 1983, I was one of the first women in EMS in Philadelphia- and the country. Female EMTs were a rare sight in those days. There were just as few women cops-and no females in the Philadelphia Fire Department who weren't dispatchers. Working in the projects, you piled your hair up under your helmet and hoped no one took notice that you were a woman.The uniform and turnout coat did nothing to emphasize femininity-everything was just a smaller version of what the men wore, and it was all ill-fitting and uncomfortable. I wore a medium blue shirt, navy twill pants and heavy steel-toes work boots, just like the men...and the same underwear, a dark blue tee shirt and boxer shorts. The only concession I was allowed was to sew the fly closed on my boxers; the tail of my man-sized shirt was long enough to meet at the crotch. I could have sewed a snap on them and made a body suit out of it, but then I would have been out of uniform during inspection...and the EMS officers came around often to check and make sure we were in Class A uniforms everyday and that the uniform was worn correctly so we'd look professional. We wore the same uniform day in and day out, 365 days a year. I will admit that I am rather envious of those in EMS I see today wearing polo shirts and shorts, or wool pants and sweaters because we never had them. Times have changed-for the better. The equipment is better and the uniforms come in all sizes-men's and women's. Sometimes I think that they've sacrificed professional appearance for comfort, but then again, half way through a 48-hour shift, no one really notices.
What has not changed is the job, which is thanklessly difficult for the most part. It's tough on your body, mind and spirit. Most of us that have spent a few years in the field have at least two or three major injuries that end up side-lining us to the point of disability. The turn over rate for EMS is higher than even the police department-or the military. Most only stay on the job 5 to 8 years unless you get promoted out of the field and into a better neighborhood, hospital duty, a desk job-or quit. I've done all three: I can proudly say that I was in the trenches a full ten years before I became a commander, and I lived to tell. The worst times during the job are when someone is killed in the line of duty. Some of the best are  working the holidays...Christmas in particular.

I enjoyed working the holidays, despite the ice and snow and no heat in the cab of the ambulance(you wanted heat in the back for the patient, so you turned it off in the cab-you couldn't have both.The first type 2 and 3 box units were temperamental beasts!)Oh, and no gloves-you can't grip a stretcher with gloves on and risk it slipping out of your hands.... There was a more relaxed flow between emergencies on the holidays- except those times when families gathered around the table to celebrate the season, had a few drinks...then remembered why they only did this once a year. It usually ended in blood shed; someone whopping someone else up the side of the head with a beer bottle, or whipping out a carving knife...the better prepared used small caliber firearms. In the projects they used some variation of a MAC-10, which is basically a small, quieter version of a machine gun that was chambered for both .45 caliber and 9mm ammunition. You never knew what sort of GSW you would encounter when a MAC-10 or one of it's distant cousins had been used, but the injuries were always catastrophic and usually fatal.Drug dealers loved them because they were cheap and easy to conceal, and you could be a lousy shot and still hit something or someone. Speaking of drug dealers, you could always tell where to go to get a good meal on Christmas Day when all the usual places were closed  just by observing the neighborhood junkies. Because they always have the munchies, always junkies know where the food is and where there is a McDonald's or a bodega open for a bite.
In 20 years, my partner and I never went hungry thanks to the local junkies.
The most poignant part of  any Christmas emergency call usually involved a child-children who has been beaten by a parent for some small infraction, or burned by a candle or handling a string of C9 bulbs, or bitten by the neighbors' pit bull...occasionally we'd be called to attend a child who was 'just sick', and almost without fail the Mom involved was illiterate and  couldn't understand the doctor's instructions (provided one had been consulted) or didn't speak English and was at a loss of what else to do other than to call 911.They were always relieved to see us and didn't swear at us or otherwise try to kill us. We were always delighted and slightly relieved when it was something like a case of Chicken Pox and didn't involve any bleeding. It wasn't a true emergency, but we got to do a little education and community PR...which always made the job easier down the road. In the Projects, you always took off your instrument holster and badge and holding them aloft yelled, " I'm a MEDIC- NOT A COP...!" before you entered the building. Usually this worked and you didn't get shot at...usually, but not always. I got very good at diving for cover when I worked in the Projects, and I have the osteoarthritis from hitting the floor so often to prove it.

Keith, my first partner, was a kind, compassionate soul. He was an Eagle Scout and fit the mold-he was a good man. He used to buy a bag of groceries before every shift and give a few cans of food to whomever we came upon who needed them, and the bag was always empty at the end of the day. We brought along bags of hard candy on every shift for the hundreds of kids we saw on the street and handed out all of it to the little grubby hands thrust through the windows of the ambulance. We burned out the siren on our rig playing Jingle Bells on the hi-lo unit for a bunch of little kids huddled on a street corner one  snowy Christmas Eve, then went to a 7 Eleven and bought buns, mustard and hot dogs to roast over the open flames of a burning barrel they were using to keep warm. I've never tasted a hot dog that good since; I suspect it was the company.... 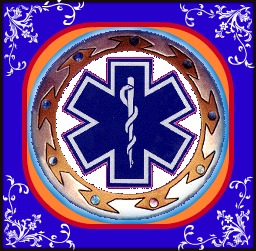 I live far way from inner-city Philadelphia now, In the suburbs west of Raleigh, North Carolina. There is a city of  Raleigh Fire Station two blocks away, and the rumble of the rigs and the sound of the sirens stop whatever it is that I'm doing at that moment...I listen, counting out the units...and I can tell by the pitch of the siren and the vibration which type of unit is rolling out onto the cement apron in front of the station sight unseen l.

On Thanksgiving I baked a cake, carefully pinned my (now vintage) insignia on my coat collar and hiked up to the fire station. It was a little before 6 p.m., and the firefighters I could see sitting around the table through the window of the break room were sipping coffee and finishing their dinner. There was a TV mounted on the wall playing a football game, and a couple of the guys were snoring in chairs and the sofa in front of it. The floor was littered with empty soda cans and a pizza box, take out containers from McDonald's, and someone's turn-out pants draped over the end table. It looked just like I imagine every other fire house in America looks like on Thanksgiving day...it looked just like the one I used to command in South Philly, and it felt a little cozy ....like home.

I banged on the window with my fist and smiled at the momentarily startled crew. A young EMT answered the door warily, " Yes, ma'am...What can I do for you ?" His eyes swept over the insignia on my collar: the gold eagle of the Tactical Commander and the blue and white Star of Life of EMS, and he stood up a little taller and snapped out smartly, " Yes, ma'am!"

I pushed the cake into his hands, " Happy Holidays." I said, " Thanks for being here... Be careful out there."

Posted by AmethJera at 6:49 PM