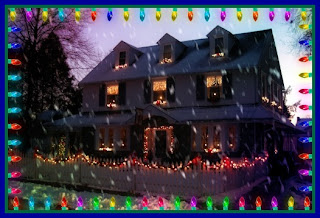 When I was growing up, the time between the day after Thanksgiving and New Year's Eve was called Christmastime in my house, a hold-over of my grandparents Depression Era/WWII experience. It somewhat secularized the holiday, and they were all about stamping out any religious overtones. Store windows were decorated in tinsel and lights, green wreaths with big red bows hung in doorways, the Salvation Army hung around on street corners next to their kettles and rang hand bells, Santa Claus was everywhere- and we were all pretty drunk on seasonal spirit without having drank a drop. Occasionally, someone was rebellious and quietly placed an electric menorah in their window to signify that they were Jewish and that Hanukkah was a holiday worth celebrating amidst all the Christmas hohoho. The two could exist side by side because both were festivals of lights, and most of the time the menorah was mistaken for blue and white Christmas lights anyway. No one was offended, everyone just allowed room for everyone else.

Enter Kawaansa...This African American harvest festival was first celebrated in the mid 1960's, with several scholars taking credit for it's creation. A week long festival of culture and family, it was quickly embraced by the Pan African community in America.It always felt a bit radical and dangerous in a Black Panther sort of way to middle class white America, who didn't understand because it seemed to be a dark secret(no pun intended)of the Black Community.  But like Hanukkah, it's always taken a step back from the glories of Christmas.

The Christmastime of my childhood was called Yuletide by folks in the Victorian era, an attempt to separate the Christ of Christmas from the St. Nick/Father Christmas merriment of the season: Christmas was the day of Jesus' birth and Yuletide was everything else..Twelve days of it, in fact, harking back to the medevil Days of Misrule and the earlier Saturnalia. Days of the returning of the relatives you loved or the ones you didn't want at Thanksgiving, friends, an abundance of food, lots of flowing booze...all topped off by a big once-live
tree placed precariously in a stand that held water and was trimmed with electric lights, glass balls, angel hair and tinsel. You didn't dare touch the Christmas tree, except to add water to the base. It was one of those things in my childhood home that had a secular sort of sanctity about it; that is as: if you defiled it, something really terrible was going to happen to you- which was usually enforced with a good, solid ass-whipping. Besides, no one wanted to touch the thing anyway: it had razor sharp needles and the sap gave you a rash, and it was laden with little bombs that burst into shards when they hit the floor and spin glass that was impossible for tweezers  to remove from unsuspecting fingers, and you could possibly be burned or even electrocuted by the lights. Oh, and there was always the possibility the whole thing would simply go up in flames at any moment. My Grandfather was the local fire chief and yearly recited a litany of homes lost and little children burned to death because someone left the lights plugged in on their Christmas tree overnight, which of course, always made for lively conversation around the table Christmas Day. Despite vigilance and your best efforts, the tree was usually (mercifully) dead before New Years Eve, and immediately removed because it was a certified fire hazard.

Everyone wished everyone else a "Merry Christmas", and no one was offended. Political correctness had not yet reared it's conveniently self-righteous head. The alternative greeting "Happy Holidays" was also acceptable, although very definitely considered secular and less heartfelt by the public( Christian) mainstream.
Today, as a Pagan, I still wish others a Merry Christmas, because that's what the season is in the common lexicon, although I do try to consciously say, " Happy Holidays" to cover the multitude of holidays that transect and overlap one another at this time of year. And as a Pagan, I do not go up in flames if someone  innocently wishes me a Merry Christmas, because I take their well wishes in the spirit of the season.There is no secret Christian agenda to convert me at work here, people are just trying to be nice to one another.

I do make it a point to say, " Blessed Solstice" or "Merry Yule" to my strictly Pagan friends, most of whom wouldn't bat an eye if I slipped and used the C-word. Were all raised in other-usually Christian- faith traditions, and we understand what intention lies beneath a heartfelt greeting. no matter what words are used.
I believe that's what lies at the core of the season's greetings- the intention of wishing one another goodness and blessing in a time out of  time when the rawness and reality of the world is put aside for a little while. Whatever you call it...the season is meant for caring,a time when we should recognize the simple vulnerability of just being human and speak a kind word to that.

May you Blessed Be.

Posted by AmethJera at 4:19 PM