Three Kings and a Bambino Shed 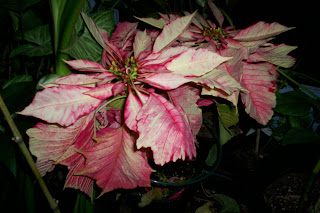 I was serving in what turned out to be my last parish as an Episcopal minister, and it was late Advent. I was the assistant rector in a Revolutionary War era church built of river rock at a cross roads which sat back far enough off the road that the roar of combustion engines was lost to birdsong and organ music. A beautiful building, with white-washed, gated pews and a slave gallery (balcony) just up a winding staircase. It had changed little since it was built, and things were rather cramped by today's standards. I remember it now as a kind of dollhouse/church,the appointments much too low and small for modern men and women.

Father Mark was known around the diocese as a bit of a character: he'd been a university chaplain and when he wasn't appointed a canon by the Bishop in his home diocese (whose politics he was diametrically opposed to) he somehow managed to not only be appointed to that position in the Philippines, he picked up a Doctor of Divinity along the way as well. at one point he was nominated as Diocesan Bishop and his wife told him that " You'll win because people know you." or, " You'll loose because people know you." I thought it was a very Buddhist way of looking a things. Well, Mark lost the election, and he immediately became the rector of the Church at Mill Creek Hundred.

Like all churches that had been in existence for a period of time, Mill Creek Hundred had an eclectic assortment of holiday decorations- things purchased by the Altar Guild for a specifically themed event, or things donated from family clutter. The Nativity set was composed of the latter.

Every Episcopal Church has a Nativity set- Mary, Joesph, the Babe Jesus, a manger, and some hay. The set at Mill Creek Hundred had been expanded over the years by the addition of various odd pieces-Shepard's, angels, animals, birds and many, many sheep and several camels. None of these additional pieces matched the original set and many were of a different scale, which made it a yearly logistics challenge for the dear ladies of the Altar Guild to position figures twice the size of the Holy Family far off in the background so when viewed from the front, they all appeared to be the same size. My favorite piece was a Shepard who looked exactly like Charleston Heston in the role of Moses; at some point he had been dropped and decapitated, and his head hastily glued back into place, only with his Adam's apple on the side of his head so it resembled a goiter. Recalling my first year of Old Testament studies, I determined that Moses had not been present at the Nativity, so this guy had to be a Shepard by process of elimination. Summoning my  art conservation skills honed at NYU, I took him home, decapitated the figure with a Dremel tool,sanded down the offending goiter,and repositioned his head. At the same time I made a couple of cuts through the legs to foreshorten them so he didn't tower over the Manger when positioned at the back among countless sheep of every size and color (including pink and mauve, don't ask...I didn't.)

While I was performing surgery on Moses lost twin, Father Mark was crawling far back into the basement of the church to retrieve what he termed, " The Bambino Shed". (Both Mark and I have a wicked sense of humor and played well off one another; we could make nearly anything into the subject of irreverence and satire, for which we both were brought before the Bishop and warned many times, ha ha...) The Bambino Shed had been recycled out of an old wooden orange crate, the whole outside of it wrapped with 1 inch holed-chicken wire so greenery could be lovingly tucked in by the Altar Guild. Attached to one of the upper cross beams (which had begun it's life as a # 2 lead pencil) was a rather large, out of proportion spun-cotton dove, whose left wing was shortened by the silverfish who also resided in the church basement.)

On December 15th, my job was to take the entire cast of the Nativity home and clean/repair or discreetly dispose of things too unseemly to represent the birth of Jesus.
I patched a camel, a few sheep, and tossed out what I believe might have been a boarder collie, but resembled an anteater by the position of it's snout ( No anteaters at the Holy Birth, either. Sorry. Although the elephants used by one of the Magi had to have come from Africa by the size of their ears...maybe I was hasty throwing out that anteater, er, dog...)

The six elderly ladies who made up the Altar Guild always did a magnificent job of decorating and wasted nothing...The Bambino Shed containing the Holy Family and now covered by greens was lit by a small electric bulb disguised as an angel...The Magi were placed on the opposite side of the Sanctuary and moved daily toward their quest following the star (e.g.,the table upon which the Bambino Shed sat) ...three Magi, a horse, a camel and an elephant, accompanied by servants and chests of gold, frankincense and myrrh, inched their way across the sanctuary floor toward the Bambino Shed, until they all hopped up onto the table holding the other figures on January 6th, the Feast of the Epiphany( an assumption on my part; I never actually saw them do this, although I did inadvertently drink too much communion wine during the three Xmas Eve services that year and teetered dangerously against the Altar Rail, nearly falling over backwards. After that, I learned to pull rank on the ushers and make them finish the blessed sacrament left in the cup, LOL.)

The daily journey of the intrepid Magi, aided by the Altar Guild, was dramatic and quaint. I must admit, however, that I was stymied by the two additional Magi peaking out from beneath the poinsettias surrounding the Lectern ( Who were they? Did someone on the Altar Guild uncover a forgotten text of the Old Testament? Were they the second string-just in case one of the first three didn't make it during the journey following the star to Bethlehem? I wondered, but the wisdom I had gained over the years as a minister told me not to question the mysterious ways of the Altar Guild, and the additional two Magi, their camels and slaves, remained in hiding under the poinsettias until well past the Epiphany.)

At the appointed time on December 25th, at the end of the first service on Christmas Eve, the occupants of the Bambino Shed came alive. There was an audible gasp as the lights were dimmed and the string of white lights positioned among the rocks and trees and cut greens were lit...it was magic.Everything took on a golden glow. The single angel, wearing a tinfoil reflector disguised as a robe lit the inside of the manger, and the Holy Family and visitors were illuminated by the Glory of the Lord (and Edison Electric). I'm pretty certain this was what St. Francis had in mind when he created the first Creche so many Christmases ago to tell the sacred story to the masses.

Love was born once more at Christmas, the Divine Child shone in the rapture of the Sun as the Son once again....Hallelujah!

Peace and Grace of the Season be yours today and everyday....
Posted by AmethJera at 10:42 PM