A Fire in the Head 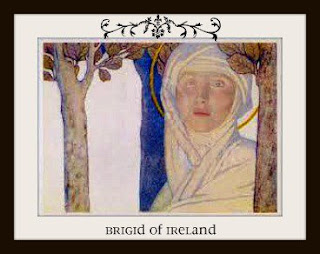 "A fire in the head": an ancient Gaelic saying that meant inspiration and passion. Art work shows many saints with a single flame above their heads, a singular sign of holiness that preceded the nimbus, or halo depicting one selected by God for greatness. Nowadays we say, " I'm fired up" and we link that to the spark that fires a combustion engine to start and run, that is, we get 'started' on something. The older saying has deeper meaning: a fire in the head relates to ancient Irish shamanic practice, where the fire comes from the gods and engulfs one in divine passion. Spiritual practice becomes ingrained with the soul, nothing interrupts the quest for knowledge and the love of the Divine, or the journey to the Place of Deep In-dwelling.

There I stood on a very cold Imbolc some 30 plus years ago on a beach, warmed by the fire in the head, during my Initiation to the Craft. I had dedicated myself at 17 after finding a copy of Earth Power by Scott Cunningham and hungrily devoured every word of every spell and ritual- my first experience with earth-centered spirituality in print. It validated what I had been doing as a child when I went off deep into the woods and sang to the nebulous Divine Other as I picked up stones and harvested a clip here and there of whatever was growing to take home. I collected all these things by instinct, not knowing what I'd do with them, but eventually I had a rather large collection of dried plants, stones, sand and other flora, and I trusted that the Universe would tell me what to do with all of it, and as it turns out, it did. I had a vague idea of what a spell was, that you wrote words of power and used the appropriate materials to make it so. The information in Earth Power, although wonderfully written, was limited. I wanted more; I needed to expand my practice because I knew that I wasn't at whatever destination I was headed for-yet. Finding what I needed to expand my practice took me through many occult books at the library ( mostly badly written and useless). Some of my friends were into an archaic form of pseudo Satanism, which I rejected out of hand, but the ceremonial magick of their ritual was of interest, so I read Crowley. The wordiness and obscure occult references confused me and I was bored by what I didn't understand because instinctively I knew it wasn't what I was looking for.In college I accidentally fell in with a couple of girls who were studying Minoan Witchcraft, and I joined them in open circles and rituals until I was eventually asked to become a member of their circle. That's how I ended up on the beach so many years ago, answering the questions of a Challenger during a very long, very cold Initiation ritual. I remember very little of it, frankly, other than it was damn cold and I was wearing a flimsy white granny dress and a cape made from a wool blanket; I nodded and responded in the appropriate places, they pricked my finger and took my measure and I was proclaimed a witch and given my name: "Ameth", Doreen Valiente's witch name-meaning "first"- and  "Jera", the Rune of Harvest and right actions, of peace on the land and in the heart. And I have been AmethJera ever since, the name chosen numerologically for me (which makes me a 9).

The euphoria didn't last very long, probably until I graduated and left New York City to return to my mundane life in suburban Delaware. There, miles away from my home coven and Craft sisters, I went back to my own personal way of doing things. Girl Scouts(and later, Boy Scouts) had been a great outlet for being close to Nature, and I became an adult leader in the Brownie and Junior troops I'd grown up in; I attended Edith Macy National Training Center and designed the original Be A Discoverer badge for nature exploration. Although I was a witch in my heart, I couldn't say it aloud, even though I knew I was being drawn toward something deeper and more spiritual. When the opportunity was presented to me to attend seminary through the Episcopal Church, I agreed, and the fire in my head grew luminous  through all the classes on ancient history, sacred texts, and liturgy...the Church's word for ritual. I loved the Liturgy and everything surrounding it; I reveled in the magick of the Eucharist and in incantations of the services for the Church Year. I was officially an ordained minister, but I felt more like a Priestess than a Rector and gravitated toward the Feminine Divine and away from the Father in Heaven. Jesus wasn't my Savior, but he was-and still is-an ascended master. I was learning about holy trinities that didn't include the Father, Son and Holy Ghost. I discovered the Holy Ghost's name was Sophia...and I was called to my Irish roots by Brigid.

I don't remember a particular day when I decided to make the formal break with the Christian Church and  "take up the broom" for good, but I do remember going to my Bishop- a lovely, elderly black man - and telling him the whole story of how I felt about my spirituality and how I wasn't being honest with myself or the Church. Bishop Quentin sat silently weighing what I'd said, and instead of bringing the wraith of God down on me ( which I expected, along with expulsion from the Church) he said very quietly, " We all have a calling; yours is different because it transcends the limitation of our priesthood. You are no less a member of the priesthood, but it is a wider, more universal calling. You know that, and I think you should go what makes you happy and feeds your soul."

And...I did go, to follow the call of Brigid. The next few years were spent studying Irish history and Gaelic spiritual traditions and morphing it all into something that makes me feel whole and satisfied. I love the mystery of the Fae and the secret places, the power places and the connection to She With Many Names through Brigid. I can go to the Place of Deep In-Dwelling for my needs and concerns, and I learn patience and tolerance from the Fae and mystical creatures of the Other World which opens so many possibilities for me.

Here I sit at the keyboard in the company of the Goddess Brigid, she who exemplifies what is Irish in me; the patron of forges, poetry, and healing. It is once again Imbolc, and together we celebrate this fire festival in the lengthening days and returning warmth of the Sun, awaiting the birth of Spring, in anticipation of what the fire in the head may yet create in the nearing future.
Posted by AmethJera at 9:37 PM