Why Does Connection Have To Be Instant? 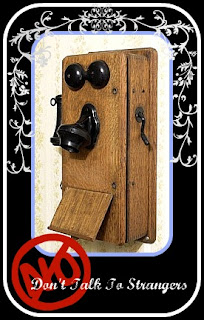 I'm about to make a confession: I'm not a big fan of 'instant' connection. The invention of modern communication technology-as wonderful as I think it is-disturbs me. Don't get me wrong, telephones,computers, cell phones and answering machines are all an integral part of my home and  probably more important than I'd like to admit to my daily existence.

And that, in a nutshell, is what I find disturbing. What did we do before we could be instantly connected in the blink of an eye, the click of a mouse,or hit the 'send' button?

We waited, that's what we did. We exhibited patience. We learned that we didn't have to pick up instantly, answer, or even reply until we were good and ready. We still had command of our own lives and weren't at the whim of whatever we were electronically connected to that whirred, beeped or blinked.If Mom didn't drop everything immediately  and rush out to pick us up before the agreed upon time to keep us from  getting soaking wet because we forgot our galoshes and called (or text messaged) her in a panic from the mall, we simply got wet and developed a better plan for the next time it rained. We learned a lesson in survival from one of life's little gazillion experiences because there was nobody to ring up and demand attention from NOW. Juicy gossip between friends and neighbors was saved until later if the phone rang and no one answered, or we actually visited in person.

By the way, do you realize that we no longer make acquaintances, we network? We collect email addresses instead of business cards (or email addresses on business cards) so we can all jump on the world wide web like so many  information-hungry spiders and spin until we're dizzy. We instant message on chat instead of chatting with friends over coffee. We talk in real time on Skype instead of really talking face to face. We listen to dozens of recorded messages on answering machines because someone would rather be played back than call back later themselves. We have become just that lazy,complacent and dependent on the technology, for-fitting any inconvenience to ourselves...and we have become demanding and self-centered in the process. ( Don't believe it? Remember how frustrated or annoyed you felt the last time you made a phone call and there was no one home or no automated voice answering machine allowed you to leave a message?
I rest my case.)

I rather enjoy my freedom and not being at anyone else's beck and call 24/7. I will purposely turn off the answering machine some days just to allow the phone to ring: if whomever is calling really wants or needs to speak with me, they'll try again. I admit to liking Caller ID, but if no machine is available to record a message at the time, I don't care who's calling...They'll call back...or not.
Posted by AmethJera at 1:44 PM