If You Smell Something ... 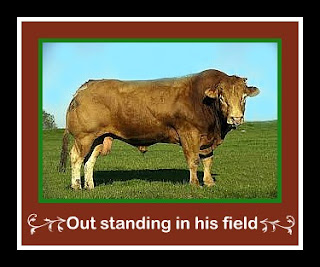 After a long, drawn out rant by someone who fancied himself an expert by presenting his lofty Pagan pedigree on a friend's Facebook page about what someone else prefers to be called in the At-large Pagan Community, my inner philosopher spoke to me: "If you see a lone bull standing in a pasture and your smell something, it is probably bull shit."

As far as I am concerned, pedigrees are only important if you're buying a show dog.  Those who feel it necessary to attempt to impress the rest of us with their curriculum vitae are like a lone bull standing in a pasture: after awhile, you begin to notice the smell and make the connection between the subject and the byproduct. In this particular case, the self proclaimed 'expert' seized upon a single word  and amplified the resulting hullabaloo into a major case for argument due to his limited, unyielding, personal definition. The result of his making cow patties over what was essentially none of his business anyway not only speaks volumes more about his need to be superior, but unresolved issues with the word for him. When no one was buying into his proclamation about his singular expertise, he quickly took his toys and went home. He's more likely than not attempting to build himself a throne in someone else's sandbox as I speak.

So...Today's Passionate Pagan Problem was that  a popular occult figure in Salem  posted his preference to be referred to as a 'Warlock'. While this sets off bells and whistles for any number of people due to a supposed negative connotation, these same folks seem to forget that in a distant age and another world, the word witch created the same reaction. A decade later, we've not only reclaimed it, we've morphed it into something very nearly respectable in the mainstream- or at least less threatening ( My favorite bad pun regarding reclaiming that particular word  is that it's now less inflammatory to say you're a witch. Yes, I'm sure someone will be offended, but this is my blog, and if you do more than groan audibly at my tasteless jokes, I'll send my flying monkeys after you- cackle, cackle, snort.)

Back to my new friend Christian Day the Warlock...he knows about all negative stuff associated with the word and has set out to rehabilitate it. I applaud his effort in challenging stereotypes and courage in expressing his individuality, and just because there is so much confusion about the origin and use of the word, I hope he succeeds in his quest.I know many males who are uncomfortable calling themselves a witch, simply because it's so commonly identified by the well-meaning general public that a witch is  a female.The stereotypical Halloween witch, the witch who shoved Hansel and Gretel into the oven, the one who gave Snow White the poisoned apple, the Good Witch in the Wizard of Oz-negative and positives-are all women. Men have enough to deal with identity-wise in some Pagan faith traditions because they have been assigned a role as  Consort to the Goddess, or viewed as somehow a less important figure.  Words certainly do have power, but only because we empower them; until then, they are like everything else we use in our practice-a tool. A word in and of itself does not have life or power until we connect it in someway with an emotion, and even emotions are limited to how we feel and not who we are. So if one of the gentry happens to come up with a comfortable descriptive term for themselves so they can stand apart from their sisters in the Craft, then I will support that. Even better if he manages to turn a negative into a positive, and even if it means going against tradition and better still if it is reclaimed from the realm of our collective unconscious- things need shaking up every now and then.
Posted by AmethJera at 2:30 AM