Are Pagans Any Better At Diversity Than The Religions We Left?

Is the Pagan community (being used here as an umbrella term) really as tolerant of diversity as we would like to think we are? Or are we just fooling ourselves? 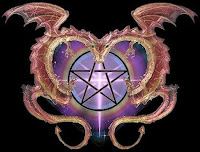 It's a question to ponder after the recent ugly flair-up concerning-you guessed it- Christian Day. If you're not familiar with the gentleman in question-and frankly, I wasn't- until the last free-for-all blowout of a couple of months ago. He's a necromantic practitioner who is the proprietor of the Hex and Omen occult shops in Salem, Massachusetts. Oh, and he's a warlock. Which was the subject of the first community bonfire and continues to fuel this newest one. That and the fact that he and a few fellow witches performed a binding/healing ritual for attention whore actor Charlie Sheen. Sheen is battling what appears to be a serious mental illness and is sure to be the next Hollywood train wreck. Christian Day was disturbed by Sheen's malignment of warlocks in the press (which Sheen has now recanted), and decided that the situation required magickal intervention...which, by the way, is his perogative. The Pagan community only gets to agree or disagree on that point. The man says his religion was insulted by Sheen's announcement that he was a "Vatican Assasin Warlock", and it's right to get pissed off about it, even if Sheen was incoheriently shooting his mouth off. Personally, I wish there would have been an opportunity for teaching and describing the ritual, but TMZ only deals in video clips and short sound bytes.

Admittedly, to some, Christian Day is a character; that is to say he has the reputation of being over-the-top in manner and dress. For one thing, he wears eyeliner and black clothing, not your everyday ensemble commonly worn by the Stepford Wife drones in big business. So he stands out in a crowd. And he is unabashedly bombastic in a P.T. Barnum kind of way due to his mastery of public relations manipulation; after all, he does have a PR background. He knows about 'branding' and how to promote himself and from what I have heard from those visiting Salem, his shops are fairly successful. In today's economy, you have to give him credit for keeping two businesses alive, particularly because they are focused on a targeted audience.

So, we have a rather noticeable, flamboyant individual going about the streets of Salem, Massachusetts in heavy eyeliner and flowing, witch clothing...a witch dressed as the public stereotype of a witch...in Salem...hummmmm...and people are whispering about it. Given the reputation of the place and it's carnival atmosphere ,and the fact that there are literally dozens of people who dress that way walking the streets ( not to mention tourists), the surprise here for me is that anyone can pick Christian Day out of the crowd. 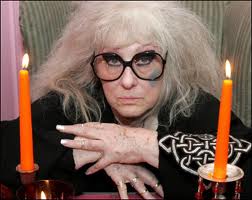 A few years ago, you could have substituted the name Laurie Cabot for Christian Day in that respect, she of the wild, flowing Cruella deVille hair, heavy eyeliner and  flowing black robes. 'Oh. My. God. She looks like a witch!' A lot of poo-poo went down about her appearance, too, until she was named the Honorary Witch of Salem, and even that sparked a controversy. Her appearance at first overshadowed her founding of the Witches Defamation League and The Cabot Tradition of the Science of Witchcraft. I think that both of those entities-one political and the other spiritual-have contributed greatly to the acceptance of the Craft in the mainstream. Laurie Cabot dressed like a stereotypical witch in public to bring attention to the fact that she was in actuality a real practitioner of the Craft and in doing so she helped to reclaim the word witch in the public eye more than anyone.The curious were educated, and  the legacy she created  is that she's now  a  well-respected representative of the Craft in both our own community and the larger world. And even recognizing that with a nod, if you check nearly any mainstream dictionary for the word witch, it's going to more than likely include the words 'evil' or 'wicked' in the definition.

Oh, and by the way...Oberon Zell-Ravenheart obliged photographers from the notorious Daily Mail tabloid by grocery shopping in full wizard's robes including a pointed hat a couple of weeks ago. Apart from a few snarky remarks from people who were obviously negative complainers by vocation, the event was largely forgotten in our community. Compare the definitions in mainstream dictionaries for the word wizard, and it's probably going to mention 'sorcery' in a negative light. Moving right along...

Some things in the perception of the general public just don't change quickly, and other's don't change at all. It took centuries before the Protestant Christian Church stopped thinking of Roman Catholics as cannibals due to the transmogrification of the mundane elements into the body and blood of Christ during the ritual of the Eucharist. They called them baby eaters, among a few other choice untruths. And they accused them of being ceremonial magicians, which is uncomfortably more truthful than most Pagans would like to admit.

It's all laid down to personal perspective...all of the above. And that perspective is colored by intolerance of diversity, the lack there of which is prejudice.

So what's the deal with Christian Day? Is it because he's out of the closet as both a gay man and a Pagan? Because he wears eyeliner? Is it because he's a necromancer? His personality? The fact that he's getting the public attention a few in our community secretly wish they'd gotten but haven't figured out how? Is it really his appearance? Or is it that he's self-identifying as a warlock?

Let's be brutally honest: it's a bit of all of the above. Christian Day is different:he disturbs the staus quo. That makes a lot of people uncomfortable.

And I know this because it's human nature to fear and reject what is different and what we do not understand. We are made uncomfortable by "the other", or more to the point, because  religious orientation for many of us comes out of a system where the different, the abnormal, the dark, "the other" is considered wrong, vile, and sacrilegious...and as hard as most of us work to overcome those feelings, they are so deeply ingrained in our collective psyche that we are hypersensitive to those feelings because they claw at our very core as an individual.They continue to undermine who we think we are. We are wounded and bleeding from this attack on our very foundation of being...and then someone like Christian Day comes along and whatever he represents to us, whatever perception we assign to what we see in him and project on him,  picks at our scabs.

I understand all of that, but it doesn't excuse all the vitriolic behavior and threats of violence some have aimed at him. In a community where "Harm None" is a mandate and not just a catch phrase, we need to do better, not just for ourselves and but for our public image as well. It 's just so much bullshit that we don't care how we are perceived by the public or by those in mainstream religions. It's cavalier and self-deluding. We do care if we are blown off as a bunch of loonies who dress up in Halloween costumes 365 days a year, or that we are evil, or simply mentally disturbed. We don't like being pushed out to the margins to reside with the lunatic fringe...in fact, collectively we fear it more than anything.No one likes to be negated or dismissed.


I had to ask myself," Are pagans any better at accepting diversity than the religons we left?


The answer is a resounding, "No."

We are no different than other religions in that we fear diversity, and lack tolerance ...but we need to admit it, first to ourselves and then to others. We need to swallow a very large slice of humble pie we have served ourselves so we can learn discernment and drop our propensity to be judgemental and fearful. We need to transcend human nature, and if we succeed, that will be quite a bit of magick in and of its self....and we will have to keep learning these lessons because our human nature will fight it and we will forget...the proof being that history ( no matter whose )  continues to repeat its self .

Singling out one individual to bash and cat-call is a waste of energy because we have given over our power to everything surrounding that situation that is negative. It has nothing to do with the individual and what he/she represents to us, but it has everything to do with what we make of ourselves and the negativity we create for ourselves.

Grace and Peace to you...Blessed Be.
Posted by AmethJera at 3:43 AM