A Few Personal Thoughts on National Pagan Coming Out Day

If you've been following this blog, you know that I developed my personal  practice of earth-centered spirituality when I was still a teenager, that I was raised as a Roman Catholic and was once a member of the Christian ministry. Even while I was actively an Episcopal chaplain, I continued to privately follow what was essentially a Pagan path.

I'm not a disgruntled former Christian. I have been upset with particular individuals personally who just happen to be Christian , and I have even been angry with God a time or two, but my religion had nothing to do with it. I know others have not been as fortunate, and that there are people who have left particular denominations and even Christianity (or Islam or the Jewish faith or whatever) altogether who are so wounded emotionally that they bleed every time the subject comes up. There are those so wounded that they hemorrhage their very souls and it manifests as anger or pain.  It's different for me. My understanding of 'God' expanded-gradually. It changed over the years as I continued to search, study and explore my own spirituality.  'God' -as I understand the Divine- is Immanent Male and Female. I can no longer pay homage to Him without Her, and as a woman, it is She whom I resonate with most closely. I choose to personalize the Universal Source so I may better It and understand my own inherent divinity. My training in Jungian psychology introduced me to the concept of aspects-which when applied spiritually- opened my psyche to see the Divine as having the characteristics of many gods and goddesses. 'God' for me continually changes, and  what I need from the Universe comes to me whether or not I realize it at the time.

I left the Christian Church under the best possible circumstances, and maybe that's why I've never felt the need to be deeply in the broom closet. I am cautious, but that comes from generally developing trust in someone I do not know than being fearful. That's not to gallantly say it was easy to leave Christianity-it wasn't a clean severance.There were angry words and tears; people I loved and who genuinely loved me are no longer in my life because of my chosen spiritual path-they have left by choice or by mutual agreement. On the whole, however,there has been scant little drama about my no longer being a Christian within my family of friends- they've either understood and been supportive or are respectfully at odds with me over religion. There are people whom I have cast out of my moral universe forever with no regret, and several whose departure still makes my heart ache. I suspect that's because I have always tried to be plain-spoken and honest throughout my life- so that no matter what the subject is- you know where I stand...and I have not always been the shinning example of diplomacy in that regard. I am anything but a typical Pisces. I've represented myself genuinely and as authentically as I could.

There have only been a couple instances where I have felt discriminated against because of my chosen spiritual path.The one that comes to mind so vividly was after I was sexually assaulted and a police officer, having found my pentacle bracelet at the scene, returned it-holding it out in front of him by two fingers as if it were something vile and nasty. I thanked him politely, looked him straight in the eye and said, " I'm Wiccan. This is sacred to me." Although I said it quietly, there was just a hint of 'fuck with me about it' in my tone, with just the right amount of, " I know my rights-and the number of the ACLU" added. He looked away nervously as I took it from him. It may not have been the right thing to do, but it was right for the moment.

I am not an in-your-face Pagan: I don't shout it from the roof tops to let everyone know. Not because I'm afraid or ashamed, it's just that I don't feel I have a personal need to broadcast my faith to everyone.There's no need to cause drama and I don't have an ax to grind. Going around with a big fat Pagan chip on your shoulder is a manipulation that doesn't speak about the individuals religious need as much as his or her narcissistic one.  There are people I have deliberately made a point of telling -like  the UU congregation where  I occasionally preach from a uniquely Pagan perspective-because I feel things needed placing within proper context.All of my friends know...and frankly it's no one elses business. There are occasions when I am publicly Pagan (as a minister and sometimes specifically a witch) and others when I am just another person on the street, and I am comfortable with both. 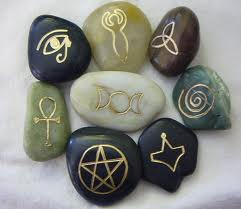 I do wear Occult and Pagan themed jewelry everyday, and most people probably assume it's just my style...no big deal. Yes, there have actually been little old Jewish ladies with bad eyesight who have complimented me  on my 'Star of David', and I have just smiled because it would have been self-righteous and disrespectful to correct them.  Most folks really do mean well, and I've had sincere inquiries about particular pieces from the curious which have provided me with a few minutes of low-key education. I have never tucked my pentagram pendant into my shirt to hide it, although I have worn it beneath a shirt when it was not visible-because I chose to. Faith is a private matter-sometimes more so in particular circumstances and  places...as I believe it should be for everyone.

Why is it important for Pagans to be 'out'? Because seeing us going about our business as a part of the neighborhood makes us good citizens-and it's good public relations. It shows we are a productive part of society. It's a sign of  individuality and diversity. It dispels fear and provides an opportunity to connect on a strictly human level. It provides opportunity to educate (not pontificate or attempt to convert). It improves our image-to ourselves and others- and boosts our own self-esteem. It makes us feel a part of the larger scheme of things in Life. And yes, damn it, it does make us appear normal-why is that such a bad thing?

Most importantly it makes us visible...and make no mistake, in the big picture of reality, it is important we are seen because it shows our numbers, it puts a face on us,making us tangible and real...and it makes us a little less likely to be feared or kicked around and bullied. Others will take us seriously when they see who we really are. We need to do this for each other- and for our children.

Perhaps that's why I embrace being a Pagan so easily and fully. I don't believe in living in fear, and I cannot live in fear because it is so diametrically opposed to everything else I believe in. In order to do that, I have had to discern which sacrifices I needed to make, and where I needed consensus.

The deciding factor for my participation in National Pagan Coming Out Day came from two insightful and passionately written articles by T. Thorn Coyle, and from Phadrea Boniwitts' blog in which she says,"Still, in my own heart, I do not believe that living a lie is any nobler than speaking one. A deception is just that. Secrets are seldom safe, and living in fear of discovery is its own kind of hell."

So those who feel they can...please be present and seen. For those not quite ready, for whatever reason-the way is being paved for you today so you can join us tomorrow.