One of the best cookbooks I ever owned was The Complete Greek Cookbook by Theresa Karas Yianilos. The recipes are outstanding, but it's also a great read, covering ancient historical practices and humorous stories.

My copy has since fallen apart and I've lose parts of it during several recent move. A recent search for a replacement on Amazon left my head spinning: the book I bought twenty-five years ago for $15 is now topping out at $175! It's going to be awhile before I replace it, LOL.

At lot of the recipes I used around Easter came from this book, including the one for Challah below. Challah is more popularly known as Jewish Egg Bread- heavy, fragrant and a pastel yellow-but the first recipe I had for it was from Yianilos' Greek-themed book. It takes a long time to make, but it's worth it. I've also used this recipe to make Hot Cross Buns. If there's any left after a few days ( which is rare), make either bread pudding or french toast out of it-in either case you'll have to soak the bread in the egg batter overnight because the texture of it is very dense.

Yianilos' book pointed out that the Orthodox Greek Church puts a boiled egg dyed bright red in the middle of the loaf at Easter to represent the sacrifice of Christ. It's a nice gesture, and I have done it- but I don't think the egg will be edible after being boiled and baked (Yuck). I have also made this as a plain round loaf and drawn a spiral or cross on it in glaze to decorate it. This is a slightly sweet bread, so it's good for breakfast toast.

Prior to putting the ingredients together,soak "teabag of herbs in warm milk for 1 hour or over night.

Place yeast and warm water (110 degrees) in the bowl of a stand mixer or large bowl. With the paddle attachment, mix until dissolved. Add lukewarm milk mixture and 2 eggs, and combine.

Add flour and continue to mix until smooth, 3 to 5 minutes. Add raisins and thoroughly combine. The dough will be sticky. 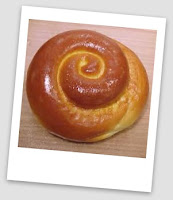 Transfer dough to a clean, greased bowl. Turn dough over to grease the top and cover bowl with a dish towel. Place in a warm, draft-free place and let rise until double, about 1 hour.( I use the oven. Don't heat it, just put it in).

When dough has risen, punch it down and turn out onto lightly floured board. The less flour you work into the dough, the better the bread will be.

At this point you can make a braided loaf or a spiral loaf like the one pictured. The spiral is just one long, skinny length of dough coiled around.

Heat the oven to 350 degrees. Let the bread rise, loosely covered with a dish towel, until double in volume, 45 minutes to 1 hour.


Brush lightly with remaining beaten egg.This will make it glossy. Painting it with water or butter will make the crust crunchy and tough.

Bake 30 minutes or until instant-read thermometer registers 190 degrees when placed in the middle of the loaf....or you can do what your grandma used to do...thump it with your fingers. If it sounds hollow, it's done.
Posted by AmethJera at 12:26 AM