It's The End Of The World...Again

The world is going to end on Saturday, May 21st at 6 p.m.Guaranteed! 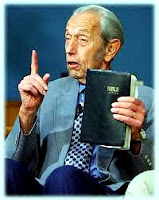 "It is absolutely going to happen," says self- made evangelist Harold Camping, who has determined after decades of studying Scripture that May 21,2011 marks the date of The Rapture "We do not have a Plan B at all. There is no possibility that it will not happen, because all of our information comes from the Bible."

I could allow this blog to degrade into a snarky tirade about the fallibility of the men who wrote the Bible  and how they basically turned it into a scriptural version of the 'Telephone' game. Instead, I'll just focus on Camping, who has recalculated his predictions numerous times. It seems he's been rather busy at it, so much so that the man who owned the wildly popular Family Radio show sold his broadcast empire and became it's volunteer CEO.I'm sure the tax breaks he enjoys as a volunteer are much more generous than the ones he enjoyed as a business man.

Here is what Mr. Camping actually has to say, according to New York Magazine:“When we get to May 21 on the calendar in any city or country in the world, and the clock says about 6 pm, there’s going to be this tremendous earthquake that’s going to make the last earthquake in Japan seem like nothing in comparison. And the whole world will be alerted that Judgment Day has begun. And then it will follow the sun around for 24 hours. As each area of the world gets to that point of 6 pm on May 21, then it will happen there, and until it happens, the rest of the world will be standing far off and witnessing the horrible thing that is happening.”


He goes on to qualify his statement further by adding that those are not his words, but the information is found in the Bible. When I was in seminary, we debated the Apocalypse in depth. I mean we beat the subject to death from every angle. There is no description of the Apocalypse anywhere in the Bible- or any other known sacred text - that even closely matches what Mr. Camping is proposing,so I'm wondering where he got his information from? Maybe he is The God Whisperer? Maybe Harold Camping picked up a copy of the Left Behind series and mistook it for his Bible. At 89 years of age, I suspect there's a possibility his sight is a bit fuzzy. It seems his thinking has been fuzzy for years.

Yes, Harold camping has been wrong about the date of The Rapture before- a few times. The first date was September 6th and changed to the 15th. Camping made a few adjustments in his math and came up with September 25, 1994, which was also a misinterpretation of his own prediction according to him, so the date was changed again-to October 4th. Camping then said he'd found a mistake in the ancient calendar he was using, but Christmas of 1994 was definitely the date. But wait! Maybe God had "saved the date" and it was actually February 25, 1995. Evidently his calculations were off there, too, because his next guess was for over a year later, May 6, 1996. Then he  But he asserts that he wasn't actually wrong : he miscalculated and was off  by 7 years. 1994 was actually the date of the beginning of the Great Tribulation. I checked the dictionary for the definition of  the word miscalculated: to judge incorrectly; to calculate wrongly. Webster's doesn't mention the word mistaken in the definition, but it does definitely say 'wrong'. So if Harold Camping holds forth that his prediction was miscalculated, what he's actually saying is he was wrong, and not mistaken. Maybe he should be a lawyer or a linguist instead of a preacher.

By the way, 2001 came and went also.That would have been the date reached by adding the miscalculated seven years. There was no explanation forthcoming from the Camping enclave in Oakland as to why The Rapture didn't occur at the time he appointed. He then postulated that it would happen sometime in 2008. Harold Camping's formal education consists of a bachelor of science degree in civil engineering earned in 1942. He holds no theological degrees, has graduated from no Biblical program, and is not ordained as a minister.By the way, he no longer belongs to the Christian Reformed Church, either. The former Sunday School teacher and church elder renounced his membership in 1988- therefore he has no affiliation with any church whatsoever. He refers to his loosely organized group of followers as a movement and not a church.Harold Camping has stated that " The witness of the Church is over and that God has destroyed it." Which pretty much makes him an evangelical outsider. Even the notorious Fred Phelps of Westboro Baptist Church fame has a legitimate pulpit to preach from no matter how perverted you think his message is. Harold Camping uses the airwaves.


I think it's safe to say that Harold needs a new slide-rule. I might add, that in light of how many times his predictions regarding the end of the world has collapsed, I'm truly glad that he didn't pursue a career as a civil engineer.

Before he started dabbling in Apocalyptic roulette,Camping was actually once well-regarded in the evangelical community, both for his encyclopedic knowledge of Scripture and his radio empire. But in the late 1980s, when he began teaching that mainstream churches were straying from the Bible and embracing false doctrine, he lost much of that support. If fact, he's gone as far as declaring that the Holy Spirit no longer works in the Church, and that no one was saved between 1988-when he left the Christian Reformed Church-and 1994, his stated  start of the Great Tribulation.

Lack of the ability to speak Greek, Hebrew, Latin or Aramaic- the language Jesus Christ was believed to have spoken- has not thwarted Harold Camping from studying the Bible on a level he believes to equal to that of most legitimate scholars. He doesn't find that being unable to discern the minutia  of scriptural text because he is ignorant of the nuances of the languages of that text  an obstacle. As a matter of fact, Harold Camping believes he is a superior interpreter of the Bible to those who have spent years in formal training against his five decades of thumbing through his well-worn copy of the KJV.

Here are just a few pearls of the wisdom according to Harold Camping:


" When Jesus entered Jerusalem just before he was crucified, He sat on a pair of donkeys. Spiritually, it can be shown that these donkeys represent unsaved people He came to save."

I'm still trying to wrap my head around the visual of Jesus arriving that Palm Sunday astride two jackasses.Maybe he did it standing up with one foot placed on the back of each beast while holding the reins, a la Horus and the crocodiles...and the assertion that the Archangel Michael is actually Jesus Christ just goes against the dogma of so many religious traditions in boggling proportions. Were there some mind- altering substances involved, or just a case of mistaken identity of entities? How can a man who claims to have studied the Bible in depth for fifty years miss the fact that the keys mentioned in the book of Matthew were not only given to St. Peter, but were those that were used in the metaphorical locks and chains used in binding things in heaven and earth ? It is one of the most plainly written parts of the Bible:" And I tell you that you are Peter, and on this rock I will build my church, and the gates of Hades will not overcome it. I will give you the keys of the kingdom of heaven; whatever you bind on earth will be bound in heaven, and whatever you loose on earth will be loosed in heaven.”( Matthew 16:18-19,NIV).

I'll tell you how: it's the Bible- not interpreted  by Harold Camping- but re-written by him.


And it goes against every grain of Christian teaching from that sacred text, particularly the admonition to not change the writings "one jot or tittle". As does his declaration that "salvation is unmerited and cannot be achieved by good works or prayer, because it is a pure act of God." What he's saying is that there's no guarantee of salvation even if you live your life in strict accordance to Biblical teaching: in other words, your salvation is the whim of God. It's a crap shoot, a roll of the Divine dice...and it's a direct contradiction of what Camping is currently saying about the Big Event to End All Events happening this coming Saturday. It's unfortunate that Camping's followers have taken his lunatic ravings to heart to the point of using their own hard earned cash to purchase bill boards and advertising space to declare the coming end of the world. In some cases, that has meant using every penny they have saved to proclaim the message of their prophet. And why not? It will be of no use when they're sucked out of their clothing during the heavenly transporter trick on May 21, and they're certainly not going to leave it around for the rest of us who will be left behind to writhe in misery until October 21st, when Camping  says the Great Final Exit of Earth will occur. I genuinely feel sorry for those who have backed this dark horse of the Apocalypse, because come sunrise on May 22nd, some of them are going to be wondering if they qualify for welfare and food stamps.


I predict that Harold Camping will be adjusting his abacus on May 22nd to calculate the next probable date for Judgment Day. There may even possibly be a run on Kool Aid at your local grocery store.