Nothing "Happy" About It 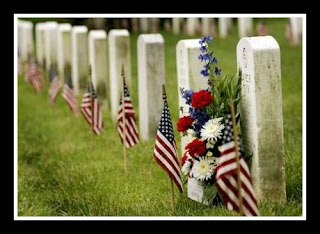 I have never, ever wished anyone a "Happy Memorial Day", and I don't plan on doing so anytime in the future. It's not a "happy" time, like Forth of July, Halloween, Thanksgiving, Christmas or Easter. There is nothing happy about it at all, if you recall the real reason for the commemoration.

When I was growing up, my Grandfather called it Decoration Day. Now it's Memorial Day, the day we're supposed to honor our war dead, who  made the supreme sacrifice for our freedom.  It is not the first day of the summer season- that's nearly a full month away, in June.There were no three day weekends to go to the beach.  Maybe the family got together to have a picnic, but you did it because you were honoring the sacrifice someone made for you to freely assemble.. after you put fresh flowers and a small American flag on the grave of your Uncle who was killed in the line of duty. I can't for the life of me understand the reasoning behind Memorial Day sales in retail stores  No one died in battle so I could get 30% off on a new swimsuit. It's not honoring the life of a dead soldier when I swing on by the mall for some great deals at JC Penney and then stop off at McDonald's for a Big Mac at the food court. In fact, back in the Stone Age, when I was a kid, not only were the stores closed, everything else was closed, too...and Memorial Day was observed on May 31st...whichever day of the week it fell.

I can fully get behind a Memorial Day parade where all the branches of the military are represented, where veterans, survivors, the VFW and the Boy Scouts march and all the high school marching bands turn out.
I want to see those elderly veterans ( whose numbers are dwindling yearly) riding in cars with the top down so I can wave back and let them know I not only appreciate their service to their country-and me- but that I'm happy to see they made it another year.  I truly appreciate the freedom to be allowed to stand on the curb and wave, because I know somewhere in the world, my contemporary in another country is unable to do so. I want to see a parent with a gold star on his/her collar so I can tell them that the son or daughter s/he lost in battle did not die in vain.

It's a crying shame-an absolutely, unabashedly, literally crying shame- that there are only a handful of citizens who have not served in the military or Scouts who know anything about the proper display of the American flag per the U.S. Flag Code- or that such a law exists. When I was a kid, my retired Army cook Grandfather taught me how to fold an American flag military presentation style, in a tight triangle, and how to quickly run the flag up the pole to the top first, before lowering it to half-staff on Memorial Day.

In elementary school chorus, we learned all the words to The Battle Hymn of the Republic, America the Beautiful and This Land Is Your Land and by the third grade we could do a decent job of singing each as a group. By the sixth grade we knew what the lyrics really meant and were proud be the ones selected to sing them at the ceremony when the wreath was laid at the veteran's cemetery in  memory of those who lost their lives- many on foreign soil- to preserve the idea of democracy.

Yes, I will sing God Bless America as a Goddess-worshiping  Pagan, because I know that  the sentiment of the song transcends the lyrics and understand what was in Irving Berlin's heart when he wrote it and Kate Smith's patriotic pride when she sang it...and I am unashamed to say that I am old enough to remember seeing Kate Smith sing it live on TV- and thrilled now with the fact  I had that honor. 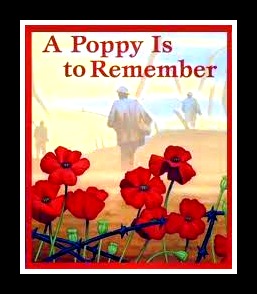 I remember most of the words to the poem In Flanders Fields by John McCrae, who was a Canadian, by the way- and that Flanders is in Belgium. Poppies grew wild and in perfusion in the area where the war dead of the Ypres battles are buried, and that's why they are the symbol of Remembrance Day, what Memorial Day is called overseas.  ( For those of you interested in pop culture, the song Snoopy's Christmas by the 1960's group The Royal Guardsman, is set during the famous Christmas truce in Ypres, where Charlie Brown's dog imagines he's a WWI flying ace fighting the Red Baron.)

No matter how sappy and corny anyone thinks it is, God Bless The USA by Lee Greenwood is a great tribute song to our military. Because I don't think Lee was much of a feminist or ever imagined there were  women in combat and  when he penned that song, I always change the word 'men' to ' folks" in the line
"...and I won't forget the men who died who gave that right to me". I just think it's more appropriate, since so many of my sisters have given their lives for our country's freedom, too, right  along side our brothers.

I live too far away from where my Grandparents are buried to put an American flag on Pop's grave, but I hope a Boy Scout or someone in another public service organization has gone around to check for veteran's markers and sees the tiny US Army emblem I purposely had installed on his side of the bronze plaque. It's the only way Memorial Day would ever be happy for me.

Posted by AmethJera at 6:00 AM