Intolerance flourishes wherever good people allow it. You can brush it aside and pretend it isn't there, but someday it will rear it's ugly head and show it's true nature...and it will affect you. 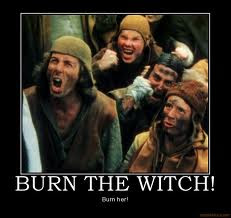 Damon Leff of Touchstone Advocacy forwarded a link to an FB group Burn The Witch. If you recall, Touchstone Advocacy recently sponsored an event to bring attention to the witch hunts in Africa, which I participated in...and yes, those things are still happening, and more than likely will continue to happen given the history of the area. That doesn't mean to give up and ignore it, it means to be aware and help when and where you can because indigenous people are being murdered for practicing their religious traditions which are reflected in our own. Do you practice Hoo Doo? Then you have a connection. How about Vooduon? You have a connection. If you revere any of the Orshias, if you have ever jumped a broom, if you are African American, there are a thousand other things which connect you to these people. Witches-all witches-by their very nature are shamanic practitioners. We are connected because we are human beings, the single outstanding thing in all of this is that it is a violation of human rights.

So before I passed the link, I went to the page and checked it out, and yeah....it's offensive. Stupid, but offensive. I posted it to the local community Pagan groups FB page and the usual 'above it all' rhetoric began, " You know this is Monty Python, right?" was the first snark.Why, yes, I did happen to notice the photograph posted was from Monty Python an the Holy Grail. I'm 55 years old, and I was watching Monty Python on PBS during the original broadcasts more than likely before you were born- thanks for pointing that out since I'm obviously senile and you are so hip and clever at your age. Thinly veiling bigotry and hatred in humor so it can be called satire later when it's called it's proper name is still wrong none the less. Let's make it really funny...let's call it Kill the Jew or Kill the Nigger...now that's a riot, isn't it? And it's a send-up of Monty Python, it's a comedic reference, so that makes it okay, doesn't it? No? Well....then do something about it besides thinking up new snark retorts to make yourself feel all cool, hip and connected. I sincerely hope these two aren't representative of  the general membership of this group, because frankly, we don't need another bunch of posers in robes who use the power of the gods strictly for self-gain and not for the improved welfare of the world we live in.

"Let's not give them any publicity" is also a cop-out. Sabrina the Inkwitch and I are involved in a group that posts encouraging and peaceful ways of dealing with the antics of the infamous Westboro Baptist Church. Every so often there will be someone- whom I'm certain is well meaning-who thinks they're taking the high road above it all and makes a post about not giving them any publicity. If that's what you want to do, that's fine with me...but I subscribe to the statement that you're either part of the solution or part of the problem...so if you're doing nothing but ignoring someone who's spreading hatred, then guess which part of that you are. There's a point when nipping things in the bud matters because it stops an action cold before it spreads and causes extensive collateral damage. If a particular action is attended to early on and it's stopped cold...then isn't that ultimate lack of publicity?

The Pagan community has developed a NIMBY mentality just like every other group- Not In My Back Yard. If it's not in my back yard it doesn't touch me, I don't get involved, I can stick my head in the sand, all because I'm not affected by it. Oh, if someone else picks up the flag, I'm perfectly free to make snarky commentary that makes me look uber informed, linked-in and cool to my peers. Just let someone else dare to bring something that merits attention to the table, and I'll have a hundred good reasons to not get my hands soiled because it might just take a little effort.

You know, it really is okay not to get involved in every cause that comes down the pike. In fact, I think it's the smart thing to know when to not get involved because you're already over-extended, too busy or whatever. That's just how it is...but you don't get to piss in someone else's corn flakes because the subject at hand isn't to your liking or doesn't up your coolness factor among your group. Invalidating someone else's cause-and I'm not talking about anything specific here, just in generalities- is just a tad right of the mid-line toward arrogant. That's where discernment comes into play.

If you aren't interested, then don't pick up the flag and just move on...but don't expect anyone else to reciprocate when you have a personal project, because believe me, as much as getting a bunch of Pagans together is like herding cats, the thing to remember is that cats have long memories.

Posted by AmethJera at 3:19 PM