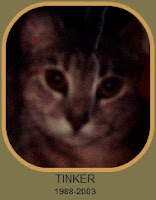 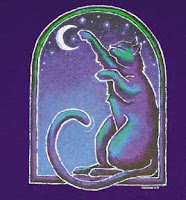 The anniversary of her death will be in a few days- eight long years without my beloved companion in this life.  There is not a week that goes by that I don't fondly recall some little thing she did that delighted me, or something we shared together. There is a Native American belief that a loved one is only truly dead when their name is spoken for the last time; if that is true, then Tinker has not died but lived on with me. I see her in every cat I come across on the street or as a friend's pet. There are days when I see that gray and orange stripped tail curl around a corner just at the edge of my peripheral vision and nights when there is a spot on the bed that feels like a warm depression made by a cat-sized body. I will be sitting at home alone, quietly writing as I am now, and I will hear a soft sound, much like that made by a small child...or a cat...and when I look up, there will a nothing in the room with me- that I can see. What is not seen with mortal eyes (and felt) is another matter. It's experienced on another level of consciousness, in far off realm of existence....and I know that Tinker is in that room, unseen to eyes which can only see what is in this life. It is not a ghost, but a spiritual presence, a prevailing love from beyond the veil that comes echoing back over the years.
I believe that love...true, unconditional love, given just for the sake of nothing more than loving and being loved... even the love of a cat...never dies.

Posted by AmethJera at 5:54 AM