Down to the Crossroads

I went down to the crossroads, fell down on my knees...
Asked the Lord above for mercy, "Save me if you please."
~ " Crossroads" by Robert Johnson 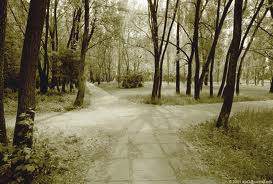 Crossroads, by nature, are mysterious. There are are at least a books' worth of legends, stories and myths about the places where roads intersect and cross.

Some day, take the time to stand in the middle of a forlorn crossroads out in the country.  Pretty soon you will realize that it is a place unlike other places. The energy is different at a crossroads: there is a thrum, a vibration that isn't quite typical. I found this out a few years back standing at the crossroads about a quarter mile from where my great grand parents are buried in rural Maryland. The church was making some changes in the cemetery, and I'd gone to check on things. While I was waiting on the sexton to return so we could discuss the removal of the rosebushes my grandparents had lovingly planted on the burial plot, I needed to stretch my legs and began walking up the old road, intending to hike only as far as to the edge of the cornfield that stretched out behind the church. I figured by that time the sexton would be back from his long, leisurely lunch.I soon found myself in the middle of the intersection where the two main roads crossed and became aware in a slight shift in consciousness. Continuing to the other side of the road to allow a hay truck to pass, I walked back out to the center of the intersection and waited.

I don't know what I was waiting for, but something was definitely there- something slightly off kilter, feeling a littler outside of time and space.There was no obvious reason for feeling a shift of consciousness, and it faded as soon as I got about ten feet away. Nothing spooky...just different.

I've come to believe this is simply the nature of crossroads. Humans tend to imbue places with meaning and imprint them. In another era, crossroads were traditionally the place where criminals, those who had committed suicide, and others who could not be buried in consecrated ground according to Church law were buried. Executions frequently took place at the intersection of roads because they were more than likely a distance outside of town. Those executed at the crossroads were usually buried there. The two roads coming together formed a symbolic cross, which was thought to be the next best place in lieu of consecrated ground for burial. That's how crossroads came to be associated with spooks and other metaphysical phenomenon. Superstition grew up around the death-related activity of the crossroads of a bygone era...and superstition, as we all know, is easy to spread and be believed.

Among accounts in Pagan genre, the goddess Hecate rules the crossroads. She appears there with her hounds in the dark of night. The sound of a dog baying in the night at a crossroad is indelibly etched into our memory thanks to Hollywood horror movies.  Hecate is a Greco-Roman goddess associated with magic, witchcraft, necromancy... and crossroads. She's also the protector of gates and walls, although it's unclear to me exactly why: I've never been able to find satisfactory information on this aspect or than an image of her was often placed on the gate to a city or the doorway to a home.Perhaps it is believed that if she could keep evil spirits out of a home, displeasing her could lead to allowing them in also.

Hecate is  most popularly portrayed as a crone and the patron of witches, accompanied by her 'hell hounds', which  are believed to be representative of lost, roaming souls- no doubt another invention of the early Christian Church to make her worship less palatable to the country folk. Farther back in history, she was portrayed as a virgin goddess, a patron to women in childbirth, who were often attended by midwives who were revered as part of the legendary cunning folk.

Whatever it is that gives crossroads a different feel- superstition, ley lines, energy vortex- it is certainly there for me. In this season when the Veil is thin, perhaps visiting a crossroads would be just the place to encounter the Crone Goddess.

Posted by AmethJera at 2:17 AM