Who Stole My Halloween?

It's been gray, cold and miserable the last few days, leaving me feeling like it's the middle of January rather than 3 days before Halloween. The usual cure for that form of the blues is an excursion to one of the local malls. And I do mean to use the word 'excursion' rather than 'trip'. A mere trip to the mall means getting into the car and driving for a reasonable amount of time, usually no more than 30 minutes. Riding public transit in this otherwise progressive mid-sized Southern city means boarding the bus a block away from home, riding for nearly an hour through several neighborhoods, apartment complexes and a university campus to a shopping center that is 10 minutes away by car, transferring to a connector bus that will take you Downtown to the transit hub (another 45 minutes. Downtown is 20 minutes from home by car, tops), where you wait 19 minutes for a bus that takes you through several very nice suburban neighborhoods, which in turn takes another hour. See what I mean? That's an excursion. It doesn't matter which mall you go to, they are all roughly two and a half hours away by bus-and that's only one way. Those who work as planners for public transit can't understand why more people don't ride the bus. A month ago I flew to LA from Atlanta in the same length of time. Think about it.

My intentions were to head to Cheesecake Factory for lunch, then cruising the mall to ogle  the Halloween/Autumn/ Thanksgiving stuff, which always cheers me up even if I don't actually purchase anything. I am a window shopper and enjoy just looking...and I admit that I often leave coveting something totally frivolous. If it's on sale-or cheap enough-it may come home to live with me. It's a challenge to justify one more dust collector, but I'm usually up to the challenge, especially if it's something that can double for Halloween and Thanksgiving ( Yes, I do have too many glass, ceramic,wood, resin, porcelain, plastic pumpkins-why do you ask? ) I am rather proud of my collection of  Autumnal arts, and I am actually picky about what I buy. Scoring something new is part of the fun.

I knew this was going to be a dismal day when I found myself walking through stores already decorated for Christmas. Not stores selling things pertaining to Christmas; I mean decorated for it and playing carols over the PA system. I love Burl Ives' singing Have A Holly Jolly Christmas as much as the next guy, but not on October 28th, and especially not when I have traveled two and a half hours to look at Halloween things. Where were the Jack-O-Lanterns, black cats, bats and witches hats? 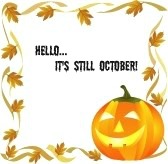 Hello, Mall Security? I'd like too report a robbery....Somebody stole my Halloween. There were spun polyester spiderwebs, scarecrows, mummies, Jack-O-Lanterns and homemade tombstones decorating the houses I passed on the way here, so I know I'm not confused about which holiday we're celebrating in a few days. The trees are still thick with colored leaves, and until this morning, it hasn't actually been all that cold. Costumes are being sold in Rite Aid and ghoul make-up is 50% off, but the halls of the local mall are decked with artificial pine, red ribbon,candy canes and snowflakes. And that  empty space that's been therecsince the beginning of the year ? The one that had the 'Coming Soon' sign promising a Halloween Adventure store now has A Christmas To Remember store instead. What happened? Is this a trick?

I feel like Charlie Brown's little sister Sally who misses Tricks and Treats because she's been waiting for the Great Pumpkin with Linus: I want to yell, " I've been robbed!" It was little comfort that the Hallmark store had a half isle of Halloween nick-knacks. Most of them were candles anyway.  I don't think the shelves were empty because the really cool Halloween stuff was gone, rather it looked like it had been moved to make way for all the Christmas junk...and there wasn't a single turkey in sight. Nada. Nothing. At least they had the courtesy to set up the Hanukkah goods in the back of the store
( or they were hiding it). Christmas with all it's red and green ho ho was front and center. What there was of Halloween was behind it, farther inside the store. I don't understand the reasoning behind this marketing strategy, and I've worked retail off and on for years.

The Macy's where I worked  years ago trimmed their store with orange, yellow, red and green leaves. They were scattered inside low display cases and Autumnal garlands hung from the taller displays.The trees-which I knew were really artificial Christmas trees underneath-were hung with colored leaves, tiny pumpkins and bats (which were later replaced with turkeys). There was a spooky woodland theme going, kind of like the haunted forest. A couple of the manikins on the main floor were draped in sheets and dressed in orange and black clothing, or something appropriate for a homecoming/tailgate party. We had a proper recognition of Fall prior to Christmas...which arrived with the Christmas Parade on Black Friday. Last year I missed  the Christmas Parade here because it was held ten days before Thanksgiving.

The retailers and marketing geniuses think that putting all this stuff out early will inspire customers to buy more merchandise sooner, but I think a lot of people are like me. In fact, I know they are, because I overheard several making the same complaint I am right now. I know there is a psychological angle to marketing and presentation, but I can't for the life of me get the gist of what I saw today. Hoping to see some Autumn cheer and being met with Christmas was...underwhelming. It  felt forced-especially seeing sales associates in Halloween costumes working amid Christmas decorations- and very, very artificial and contrived. From working behind the scenes I know it's all an illusion, but out of context, Christmas wasn't bright, shiny and happy. Rather there was the opposite effect-it was contrived and depressing because the thing that's  the real reason for the season ( and no, I don't man Jesus) is Christmas Spirit. We have bought into Charles Dicken's ideal Merry Christmas, and as hard as they tried, it was no where to be found...because it's not Christmas, damnit, it's Halloween. The red and green looks sadly out of place and by December it will be shopworn.

A word to the retail giants: I may buy Christmas presents throughout the year, but I don't buy anything Christmas related until Christmastime. I don't patronize stores that drop Christmas into a slot right after the Columbus Day Sale. I celebrate the beginning of Autumn, Halloween and Thanksgiving, so tell Jolly Old St.Nick to park his sleigh for at least a month, tell the herald angels to put a sock in it, and kick Christmas all the way back to the North Pole until Black Friday. Right now give me a Jack-O-Lantern and a handful of gingersnaps and I'll go away happy.