It's That Time Again, Charlie Brown!

Screech owls hoot. are you listen'in?
Beneath the moon; all is glist'nin--
A real scarey sight; we're happy tonight.
Waitin' in a pumpkin wonderland!
~ " Pumpkin Wonderland" from the Peanuts Book of Pumpkin Carols**

Every year when the decorations come out, so does my Peanuts Book of Pumpkin Carols. I have a first edition of this little booklet, which was actually meant to be a greeting card produced by Hallmark. The Hallowe'en of my childhood was truly a 'pumpkin wonderland'...Besides some really neat-o decorations when I was 10 years old, we had that brand spakin' new TV special called, " It's The Great Pumpkin, Charlie Brown", which I watched for the first time on our dinky black and white television set. There was 'good old Charlie Brown', his innocent little sister Sally, child prodigy Linus van Pelt, his erasable big sister Lucy,  neighbor Pig Pen and the whole gang...and of course there was Snoopy as the World War I flying ace drinking root beer behind enemy lines in the French countryside. 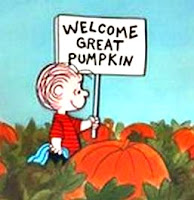 Linus, malleable  buddy of Charlie Brown, has been tending his sincere pumpkin patch for 45 years now, and still no Great Pumpkin has appeared. I adore the psychology behind Charles Schultz's creation.  Linus is the Eternal Optimist in each of us sitting in his pumpkin patch: we know something greater than us about to reveal itself, we just don't know when. We know something earth-shattering is about to happen...so we wait. And wait. The Sallies  of the world that we've convinced to join us yell for results when they don't receive instant gratification, but the Linus in us is patient and kind, and we continue our sometime lonely vigil waiting for the Ultimate Prize or deity  of a Great Pumpkin to appear before our eyes. Linus and the Great Pumpkin are potential and anticipation made manifest in the heart of our long-lost inner Child. That, I think, is what is at the core of why we love Hallowe'en- something fantastic beyond our wildest dreams could happen if we just believe. 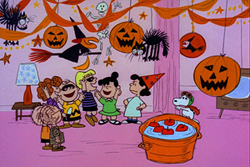 In the meantime, life is meant as a celebration. It's one big Hallowe'en party on the level of what taps into that which is still good and child-like within us. Sometimes it taps into what's not-so-good, too, and we take on the persona of  the elitist Lucy, the  meanie who draws a Jack-O-Lantern on the back of Charlie Brown's big pumpkin-shaped head at the party in front of all his friends, and intentionally embarrasses him.( In our current decade Charlie would be so emotionally scarred that he would have to go into therapy for the rest of his life.) 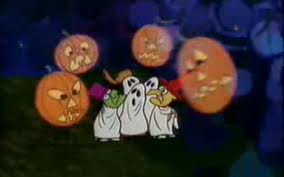 The Great Pumpkin is a very clever portrayal of modern life by Schultz 9who was a   Presbyterian church school teacher in real life  and authored a very funny book about kids and faith called Young Pillars. He had unique insight into what makes us human). He knew we'd come across some scary boogeymen out in the real world while we're collecting  our goodies, but there's safety in numbers as 'the kids' huddle for protection, only to  skitter off to the next house with a glowing porch light as soon as the danger has passed. Isn't that really what we all do in our own big, overwhelming, soul-sucking world? 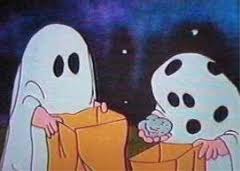 "  I got a rock..."  Is probably the most iconic Peanuts quote ever, because we all know what it means, and it makes us cringe just a little whenever Charlie says it during the course of an evening of  trick or treating.

I can relate to Charlie's anticipation of getting a fabulous treat in his goodie bag...only to realize that once again, someone has given him a rock instead. It's what happens when your big project doesn't come through, when your prospects fail and when nothing goes right in your life. " I got a rock.." just about says it all when you need that ultimate expression of disappointment. I've been right there next to Charlie Brown with my own bag of rocks-haven't we all?

And yet Linus still sits patiently out in the pumpkin patch year after year as the  harvest moon rises and bathes everything in it's golden light.  There is a bittersweet resignation in his countenance, a determination not to loose faith....and to keep believing in what he knows is true.

**The Pagan Library.com has some additional songs in their collection, from a later edition. http://www.paganlibrary.com/music_poetry/peanuts_pumpkin_carols.php
Posted by AmethJera at 1:15 AM