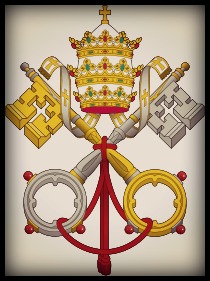 Before I even begin, this IS NOT a treatise against the Pope or the Roman Catholic Church. It does, however, point out the allegations of sorcery connected to various individuals holding the office of Pope, with as much historical accuracy as I could find through current research.

The Holy Roman Church's psychological hold on the populace throughout history has been it's  privileged knowledge of Mystery and the Occult. The Papacy is the highest elected office in the Church-that of the Vicar of Christ-the single human conduit and intercessor to the Divine according to the belief of the world's many Roman Catholics. It is the highest position in Church Hierarchy, so when the credibility of a Pope is suspect in any manner, particularly in association with the 'dark arts', it is a very, very serious matter. It happened more often than one would think: all of the Popes accused of sorcery and being in league with the Devil were embroiled in controversies spawned from jealousy and political envy. Fights for control of the Papacy were common-and are ongoing to this day.

Leo I engaged in a power struggle against his bishops and attacked a major gnostic religion in Italy-where upon he was accused of sorcery and witchcraft by his detractors. A later namesake, Leo III, was credited with writing the Enchiridion, a grimoire  which he gave to Charlemagne. The emperor provided protection to the Pope for the remainder of his reign.[http://www.sacred-texts.com/grim/bcm/bcm10.htm]

Sylvester II was an interesting character. A reputed necromancer, it is rumored he won the Papacy through a pact with Satan via the use of magick- and he consorted with a demon mistress names Meridiana who provided him with material wealth as well as satisfying him sexually. ( Talk about having it all!) A man of science, Sylvester formed a bronze head with which he conversed  on matters of state and religion.[ http://www.chemistrydaily.com/chemistry/Gerbert_of_Aurillac] One of the predictions of the head was that Sylvester would "only die in Jerusalem". The Pope vowed never to visit that city. One day, while saying mass in a Roman church, the pope fell ill. Remembering the prediction of the bronze head, he asked his assistants the name of the church...which turned out to be The Church of the Holy Cross of Jerusalem. (Talk about irony?) Resigning himself to his fate, the Pope gathered his Cardinals and confessed his deal with the Devil. He died and was buried in Lateran, where local lore claims his tomb sweats prior to the death of a prominent person. Upon the death of a Pope, the sweat from the tomb is so heavy that it creates a puddle, and the bones of Sylvester rattle and shake.[http://en.wikipedia.org/wiki/Pope_Sylvester_II] Many in the Catholic Church consider him to be an anti-pope and not a legitimate Pontiff.[http://www.catholic.org/saints/saint.php?saint_id=952]


The rule of Popes were sometimes brief: that of Pope John XXI (also accused of witchcraft) lasted eight months-after he was gravely injured in a roof collapse. Benedict XII was elected on the first ballot in 1334 and was a notable theologian and peacemaker who smoothed the waters with the Franciscan Order when they were at odds with the Church. Gregory VII was accused of sorcery by the Synod of Bressanone, before he was elected to the Papacy. He was known to make sweeping reforms despite the objections of his cardinals. ( I see a pattern occurring with these things, don't you?) All were accused of sorcery by their detractors.

Boniface VIII was an impulsive man with a short temper, although he was as well known for his intelligence. One of his most  vehement opponents was Philip V, King of France, who openly accused the Pope of sorcery and heresy. Boniface was charged with conjuring and consorting with demons, keeping an imp in a ring he regularly wore...and sacrificing a rooster...among many other atrocities. Legend has it that when  he confessed his demonic associations on his deathbed the sky roared with thunder and wind, and there were flying dragons belching fire seen in the sky. It is well to note here that after that spectacular display, he was exonerated of all his supposed misdeeds in 1312. ( At least it only took the Church eight years, and not the 300 it took to exonerate Joan of Arc!)

Other notable sorcerer Popes ( I told you this was not an uncommon charge, didn't I?) Is John XXIII, who supposedly called upon Abramelin the Mage for help, but was disposed by the Council of Constance anyway.( *SNORT* Sorry.) Honorius III , as his predecessor Leo I, is credited with authoring a grimoire .[Encyclopedia of Magic and Alchemy,pg 124, Rosemary Gulley] This particular text is cast as a papal bull giving everyone from cardinals down through common clerics the right to invoke and command spirits of all sorts. He is also believed to be the author of the Rite of Exorcism.

Sixtus V entered Holy Orders as a child and developed a talent for sniffing out heresies. Upon investigation of the Archbishop of Toledo, the resulting animosity of Spain won him an accusation of entering into a pact with the Devil.[http://www.themystica.com/mystica/articles/d/devil%27s_pact_of_pope_sextus.html] According to the tale of his servitude to Satan, he was given six years to reign as Pope, but the Devil came calling after only five, reclaiming a year because Sixtus V gave a death sentence to a young man one year too young to be executed. According to Craft lore, he was the Pope who authorized Phillip II of Spain to send his navy to England...where upon the witches of England promptly and magickally raised storms to cause Phillip's ships to turn back.[http://en.wikipedia.org/wiki/Phillip_II_of_Spain]

And then there was....Pope Joan. That's right, Joan. Several hundred years after the fact, scholars were still debating the existence of a fabled ninth century woman who supposedly cross-dressed her way through the Church hierarchy to it's highest position.Variously, writers portrayed Pope Joan as everything from a myth, to a a hermaphrodite (quite possible if there ever was such a person), to a transvestite (An amusing thought, considering the fabulousness Papal bling!)...and of course, a sorceress who used witchcraft to gain the Throne of Peter. There is also an intriguing theory that Pope Joan was actually a man who experienced some sort of spontaneous sex change. Personally, since the official stance of the Vatican is that Pope Joan never existed, then I'd like them to  explain the existence of the Porphyry Chair, a throne with a keyhole cut into the seat in order for the College of Cardinals to process by and view the newly elected Pope's...um...manparts. The chair actually exists and is part of the collection of the Louvre in Paris [The Afterlife of Pope Joan, by Craig M. Rustici,University of Michigan Press]

Posted by AmethJera at 2:38 AM