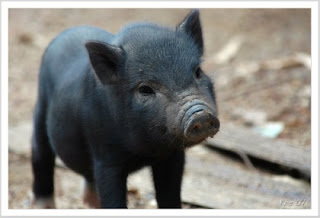 Pigs are cute. Their cuteness rivals that of kittens and puppies, and they're smart. They provide humans with spare body parts because the truth is we are more biologically similar than most of us would like to admit. They taste really, really good,too, especially when made into sausage or bacon and served along side a couple of over easy eggs. There's an old farmer's joke about how chickens only make a contribution to breakfast, but pigs make a commitment ...Okay, sometimes they smell a little funky, but hey...don't we all? That whole 'unclean' thing is a bad rap, because a pig will only lay in the muck to cool off or get away from insects. They're actually pretty clean as  livestock goes. Ancient tribes weren't too fond of keeping them because they require a lot of water and shade: instead, they  preferred cows, goats and sheep because they would eat anything when the folks were on the move. You can turn a ruminant animal loose in  sparse countryside, and they'll find something to munch.  Pigs, on the other hand, like to eat what humans eat, so they were expensive to feed and will squeal like your Uncle Louie when there's nothing for them to nosh...and they are known to eat meat when given the opportunity; and they are not only carnivores, but cannibals.Sows will eat their young. The mythologies of indigenous people are full of stories where someone disappeared in the night  and it was suspected they were eaten by wild boars. My cousin Chuck used to raise adorable pot bellied pigs. They were tiny, cuddly and I couldn't resist picking up the babies. They would  root and nibble at my fingers while  making sweet little grunts... in hindsight, I was probably just being tasted  to see if I would be a suitable future meal.

Pigs are largely native to much of the world, so there are many myths which include them. The Norse   god Frey has a huge golden pig companion named Gullenborsti; his sister Freya sometimes eschews the chariot pulled by cats she's usually seen with to ride a wild pig or boar. Pigs were once sacred animals in much the same manner as the cat.  Feral pigs are included in the animals seen among those of the  phantasmal Wild Hunt.

Pigs were often associated with the underworld: it is believed that swineherds can cross the veil unimpeded. Because of this they were associated with demons and spirits. In the Biblical story where Jesus casts the demons into a herd of swine, the modern understand in of the symbolism is that he did  so because the swine were considered unclean and according to the story were at once driven mad and hurled themselves off a cliff. [Mark 5:12, Revised Standard Version] The writers of the Old Testament were scholars of antiquity and as such often wove obscure occult facts into Biblical  text: pigs, as sacred animals of the underworld, would have been able to have been possessed by the demons and carry them off without being harmed. This is why the demons made such an odd request of Jesus, and he complied. The additional caveat of them hurling themselves off a cliff  echoed the reoccurring theme of the triumph of Good over Evil, when God throws Satan into the abyss, and was a later addition to the original story.

Pigs have figured nearly as frequently as horses in Pagan mythology. They are close to the Earth- they roll around in soil and root for their food in it. They were often set loose into newly planted fields to tamp down the soil. Because of their prominence in agriculture, they were often included in the symbolism of  many deities associated with vegetation, fertility, and harvests. According to the Welsh Mabinogian, pigs were  introduced to Britain as a result of trickery against King Pwyll, a Lord of the Underworld.  Cerridwen is often portrayed as Henwen, the white sow, who  swam across the sea from Corwall to Wales, where she gave birth to a litter that blessed the people of Wales and allowed these regions to prosper. The ferocious Cailleach is sometimes portrayed with the tusks and snout of a  boar. Pork was not only a particularly favorite meat of the Celts, but a preferred sacrificial offering. This is borne out by a quote by anthropologist and Iron Age expert Jean Louis Brunaux in The Celtic Gauls: Gods, Rites and Sanctuaries  “In antiquity, cooking was not differentiated from sacrifice; meat could not be eaten except by means of a ritual that could be directly related to that sacrifice. The hearth was therefore symbolically arranged to this effect.”( This book is excellent, but out of print.)
Pigs are also notorious protectors and sometimes associated with warfare: the Hindu god Vishnu assumes the form of Varahi when he saves the world from the floods.

Attis,Tammuz and  Adonis were all killed by pigs ( a pig, in fact, ripped open a tree so Adonis could be born). Pigs were sacrificed by the ancient Egyptians once a year during the full moon to honor Osiris. The sky goddess Nuit is portrayed as a sow whose many piglets are the stars.  In the Eleusinian Mysteries offerings of pigs are made to Demeter in return for a good harvest.( Element Encyclopedia of Magical Creatures, John and Caitlin Matthews). Ceres,too, is associated with pigs because of her motherly nature. Adherents to Aphrodite and Ishtar make porcine offerings to these goddesses because of the highly regarded and sacred stature of the pig.

In places where it was not restricted by dietary laws, smoked, dried or salted pork was a staple of  the ancient diet. The preserved meat kept well throughout the long winter when people depended on food stored from the harvest. Lard provided flavor and fat needed in cooking, and the meat was a necessary form of protein. Sometimes the presence of pork was the difference between life and death in surviving the sparse cold months.

Posted by AmethJera at 2:38 PM