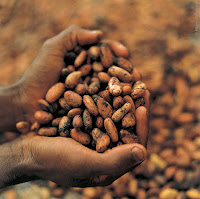 The historical origins of chocolate stretches back to the New World and Central America. Some argue that it was the Olmec, and not the Aztecs as commonly believed, who was the first civilization to cultivate the cacao tree. Sometime in the fourth century Mayans, too had a hand in growing the tree they called cacahuaquchtl- which literally translates to “tree” in their dialect. They believe all trees belonged to the gods, but this one-with pods that grew from its trunk-was a gift from the deities to man and was the only tree worth naming to set it apart from all the others.( It is notable that in the 18th century, the botanist Linnaeus, who created the system of classification for all living things, named the tree Theobroma cacao, meaning “ drink of the gods”, in keeping with the original sentiment of the Mayans, rather than simply calling it a chocolate tree.)  Mayan books in existence from the Classic period are full of drawings of priests and gods preparing cacao pods in sacred rituals. Some of these rituals included a period of celibacy for the planters, or a blood sacrifice of some kind. Most of the illustrations show cacao being made into a dark liquid, which was later flavored with spices such as chili peppers, or corn meal being added to make a type of porridge. Painted pottery from that same period also depict cacao being made into a dark, bitter brew and being poured from one pot to another to create froth-all important in the making of what evolved into what we know today as hot chocolate.

After the fall of the Mayan empire around 900 AD, the Toltec, and later the Aztecs settled that area of Mexico and continued using cacao and chocolate in their rites. The Toltec King Quetzalcoatl was also believed to be the god of air, who was to bring the seeds if the cacao pod from the sacred source of the universe, but to teach mortals how to grow crops. Quetzalcoatl had been forced by political foes to flee the area to the south. During an illness he was given a dark drink as a cure, but it is believed that the concoction drove him mad instead, and he left his kingdom in a small boat, with a promise that he would return to reclaim his kingdom. A prediction written by Aztec astrologers that he would return as a white-faced being to save his people was misinterpreted when Caucasian explorers from the Old World arrived on the scene. The Aztecs mistakenly believed they were the white-faced gods their folklore had said would return to reclaim the kingdom.

It is rather amusing that there is a story that Christopher Columbus was greeted by the Aztecs with a sack full of what he believed to be large almonds in trade for merchandise: noting his bewilderment, the Aztec chief happily explained that the seeds were used to make xocolatl, a most wondrous beverage-which he had made on the spot for Columbus and his men…who found it bitter and disagreeable. None the less, the cacao beans were taken back with the explorers to Spain, unaware of their future economic worth. [The Cook’s Guide to Chocolate, McFadden and France, Anness Publishing, Ltd,1997]

Cortes set out for the New World in search of El Dorado-the Gold of the Aztecs. What he found instead was the ‘liquid gold’ of cacao and spent several years setting up plantations around the Caribbean. Cacao was cheap to grow and there was plenty of manpower to exploit in setting up these plantations by the colonists. Cacao and its associated product of chocolate was a prized commodity in Europe. Having come upon the glories of the confection (and it’s money making ability) the Dutch soon set up their own plantations in the East Indian states of Java and Sumatra in the early 17th century. From there cacao plantations spread throughout the world and were established anywhere the humid, jungle-like conditions required for its cultivation was found.

The drinking of chocolate, however, continued to be a luxury afforded mainly to nobility and the wealthy. Beyond the discovery that it increased an individual’s energy (many monks and nuns were said to use it for just that reason through extended fasts where they eschewed solid food, but continued to consume liquids) in many quarters of the globe it was considered a source of spiritual wisdom and enhanced sexual endurance and strength. The drinking of chocolate took on some controversy between the general population and the moral voice of society, especially the Church. The Order of Jesuits, actually outlawed it’s consumption by priests, but relented after students began leaving the Society of Jesus because of it. Occasionally a cleric was known to declare the powers of chocolate was the work of the Devil, but his voice would go mostly unheard by an unfazed public which had developed a taste for beverages with stimulating properties and were also consuming coffee, tea, tobacco, rum and sugar.[The Cook’s Guide to Chocolate, McFadden and France,Anness Publishing, Ltd,1997]

The medical community was just as vocal as the Church when it came to the pros and cons of cacao and chocolate. Even though it had been thought to be a healthy way to boost energy from the origins of its discovery forward into the 19th century and was used medicinally for various illnesses and even as a wound dressing, the naysayers in the health care community waged their own battle against its use, particularly as it gained popularity as a panacea for nearly every ailment known to society at the time. Chocolate was touted as a digestive aid, and medicinal chocolate was manufactured by questionable sources and marketed as a cure for consumption (tuberculosis) and other wasting diseases, cardiac stimulants and blood builders which contained the mysterious ingredient ‘Persian tonic’.  After a period of flim-flam and exaggerated claims, chocolate was approved as a food source by hospitals, the military and other public institutions. Soon it began to appear as the cocoa powder, flavoring and confection known to us today.
Posted by AmethJera at 1:24 AM