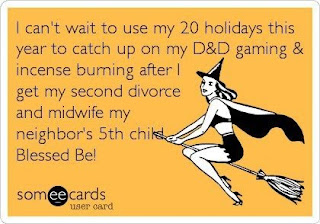 Fundamentalists in any political party or religious tradition are problematic because they have tunnel vision. They don't speak for the whole group, just their own limited membership. Their 'take' on a subject doesn't give them the credibility or right to speak for anyone other than themselves. It is only their own narrow opinion, aimed at a few ears of those they believe worthy of their message.

Such was the stuff of the recent Fox and Friends Sunday episode that set off a firestorm. You can read about it here:
http://www.rawstory.com/rs/2013/02/18/tucker-carlson-every-wiccan-a-nerd-or-a-twice-divorced-older-woman/
What the Fox News Team did was very definitely uncalled for and unjust but it held true to their modus operandi of catering to the ultra-conservative Tea Party, Christian fundamentalist and assorted wing nut segment of  the public the Fox Network usually appeals to: the intolerantly racist, wealthy elitists who wrap themselves in the American flag and smugly look down their noses at "The Other".

The Fox Network does this so well that it's become an exemplary psychological template for those who are paranoid and fearful that  "The Other" ( no matter who that is) will take away what's comfortable; they act as if this is the accepted normative behavior in American society. I understand that people rightfully don't want to give up what they've fought for to make themselves comfortable. We give lip-service in this country to the idea of diversity, when in fact, genuine diversity has been mashed, homogenized and manufactured into something very bland and insipid, lacking all discernible character or individuality...and because the majority of the population is simply exhausted trying to survive day to day without rocking the boat or making the effort.  The general public is satisfied with letting these kinds of attacks go unchallenged in the hope that the controversy goes away on its own. Power to the Sheeple.

Irrespective of theology and/or dogma, many mainstream Christians follow their own individual version of their religion, not unlike Pagans. They interpret that individuality as a 'personal' relationship with their God, so that even members of the same congregation don't necessarily follow the same form of expression or hold identical ideas of what it's like to be a Christian. That's why there are so many denominations. Just as in our own Pagan Community, you can't paint everyone with the same brush.

Fox News is tabloid journalism taken to it's highest form. It is intentionally sensational and bombastic. It is meant to incite controversy. The majority of it's commentators and on-air journalists were specifically chosen for their acerbic style of delivery and  ability to fire off caustic commentary. They speak to a populace that are ready believers in the most recent conspiracy theory which alludes to the destruction of the American Way of Life as seen through the eyes of fearful religious fundamentalists and  political conservatives. They are experts at inflammatory speech and know just how and which buttons to push. And they excel at doing that.

That is why I believe Tucker Carlson and Company had no compunction with attacking the University of Missouri or the Wiccan/Pagan Community.  Because Pagans are still basically unorganized and misunderstood, we are seen as an easy mark for those who wish to spread misinformation about us. The majority of the talking heads at Fox are bullies used to manipulating the facts to fit their agenda and getting their own way. They seized upon the University of Missouri's schedule of suggested  holidays for students  as a rallying point for their assault because it is in the midwest...You can't get much more American than the Heart Land, now can you? Golly gee, the Wiccanists were probably poisoning apple pies as we speak, so it was up to Tucker Carlson and Company to point out the evils visited upon the good citizens of Missouri...Because we all know that Missouri is the gateway to the West and the fabled Promised Land of America. Next thing you know, the Wiccans and Pagans would be making cakes and ale from the amber waves of grain and dancing naked under the moon beneath the purple mountain majesty... and God as our witness, we just couldn't have that happening in the red-blooded, blue collared, white bread domain that is Fox's America! So Tucker Carlson and Company, full of themselves with righteous indignation, stepped to the forefront, unfurled their flag, and charged.

What the Fox Four were not counting on was the Pagan Community pushing back. They shot spit balls at who they mistook as the weakest kid in the classroom and were shot squarely in the face with a bazooka.I think they were stunned that their vitriolic assault was almost immediately met by a very savvy Pagan-centric news collective and social media who spread the word in cyberspace. Carlson Tucker, Anna Kooiman, Clayton Morris and Tammy Bruce never saw the stregic assault comming...I guess it was was due to the gaming expertise of all those supposed D&D players among us. Or maybe it was surge of estrogen from all the pissed off  twice-divorced, rural-living midwives. Perhaps it was a mass of "Wiccanists" under the influence of incense. In record time individuals had put together protests, boycotts and petitions to counter the duress of the Faux Four. The counter measures were impressive. Pagans-me included- turned to their Facebook and Twitter accounts and demanded an accounting.

Tucker Carlson apologized, first on Twitter, then live on-air from the Fox studios:

"Last weekend, we reported on a story about Wiccan and Pagan holidays being recognized by the University of Missouri. My comments on the story offended a number of people. That was never my intention. I also violated one of my basic life rules which is 'Live and Let Live.' The Wiccans have never bothered me or tried to control my life. I should have left them alone. Sorry about that."

No matter how wimpy or lame any of us might have found the response, it was a huge deal that it even happened: a news anchor apologized for his personal behavior during a live broadcast on a major television network...and it must have cut Tucker Carlson-a man I personally consider devoid of empathy-to the core of his ego to be forced to say those words.  No matter how arrogant he seemed in those brief few seconds, trust me, those seconds seemed like an eternity to him, and his pride was wounded. He must have been hemorrhaging emotionally the whole time the camera was on him.