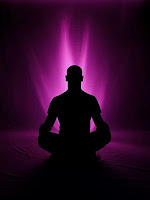 (Original post written for the Pagan Blog Project 2013,A-1)

Just like you would tailor a resume, it’s possible to ‘tailor’ the personality you present to the public for any given situation. It’s easy to become the person you wish others to believe you are simply by assuming those characteristics desirable and necessary; actors do this all the time when they create a character they portray on stage or TV. One of the ways you can achieve this convincingly is through manipulation of the aura and the use of colors.


The aura is the vibration force that radiates from everything in Nature: rocks, plants, and animals-including humans. It appears to surround the object and project a particular color or combination of colors which might include rays, sparks, or streamers which resemble tentacles. Auras are not readily noticeable to the naked eye, but specially trained and clairvoyantly gifted individuals claim to be able to “see” the aura which envelopes living objects. These individuals are believed to be able to discern the energy which surrounds us as colored layers and therefore tell from the intensity of the colors and width of the layers the state of physical health (and perhaps mental health) of the subject. I personally believe that humans are able to subconsciously ‘read’ the aura of one another, just as we can pick up subliminal cues by sensing something notable or ‘off’ in anothers vibration. How often have you thought that there was something notable or odd about another person, something you just couldn’t put your finger on? How often have you found yourself describing someone as being ‘dark’ or ‘bubbly’? Those aren’t just descriptions of their personality; they also describe the type of energy the person gives off.

The emanation of energy has been believed for centuries and is mentioned in the writings and art of ancient civilizations. In the 18th century, the mystic Emmanuel Swedenborg wrote, “There is a spiritual sphere surrounding everyone, as well as a natural and corporal one.” [Spiritual Diary]. Experiments by Dr. Walter Kilner shortly before World War I performed in the department of electrotherapy at St. Thomas’s Hospital in London discovered that what identified to be the human aura could be viewed using a machine which made ultraviolet light visible. His research was published in 1911 in The Human Aura; a revised version of the book was released in 1920, just prior to his death.[The Human Aura, New Hyde Park, University Press,1965] Both versions were met with skepticism by his peers in the scientific community.


Late in the 1930’s, Kirlian Photography, a method of recording the aura on film was discovered by Semyon Kirlian. Kirlian, a Russian electrician, claims to have photographed the etheric layer of the aura, and his technique is given credence by some researchers who believe that what is captured on film is a form of psychic energy, while others insisted that what is viewed is the bio-electric or magnetic field which surrounds all living things. Interpretation of what actually takes place during Kirlian Photography remains controversial to this day.

The famous medium and psychic healer Edgar Cayce made many of his health related cures based on what he read in the colored fields he saw around people. He soon learned that he could decipher the state of mind and health, and the spiritual development of an individual just by viewing the aura.

With this in mind, let’s revisit the idea of changing the persona by what is projected through manipulation of the aura. While the various colors of the layers of the aura are certainly up for personal interpretation, a common sense approach would echo what is generally known about the therapeutic effect of color. Bright colors are uplifting and energizing; muted colors create a subtle feeling, dark colors can be depressing or mysterious.  There are times when you might wish to change or acquire a desirable characteristic for a given situation. Knowing how to change perspective through the use of a particular color and amplifying that would certainly set up a change in your aura, wouldn’t it?

A well known method of pain management used by holistic practitioners is to identify the color of the pain and visualizing it as fading into colors that are soothing and less painful; therefore an area of pain which is described as ‘red hot’ can be changed through visualization by the client to successively less painful states by toning down the red with colors such as a pink or light purple. Case in point…Why do you think Pepto Bismal is pink? Pink is a very soothing color. The psychological aspect of imagining your stomach being coated by a soothing pink liquid is undeniable; it works because of the color association. It’s difficult to feel sick once you’ve tricked your brain into being cosseted by ingesting medication whose color invokes a feeling of comfort. Bismuth, the primary ingredient in Pepto Bismol, is a form of chalk that’s a grayish white. While the physical properties of the medication would be the same, can you honestly say you’d rather take the chalky white stuff, or the soothing pink?

Adopting a rosy pink to project through your aura will not only sooth a case of jittery nerves, but may well extend to your environment. You could also try using a combination of blue and green: think the calmness of water. Green is a color associated with Nature and growth; it’s grounding. Being grounded lends itself to a feeling of stability. You are surer of yourself when you are grounded, so you would certainly want to use green in those situations where you wished to maintain a sense of balance and be rooted.

The colors you use to influence how you want to feel will change the vibration of your energy, and therefore affect the colors of your aura. It’s scientifically proven that color affects mood. It’s that simple.

Let’s review some of the common associations with particular colors:

Green- A color associated with Nature and growth. Green is grounding and centering.

Red-A color associated with both passion and anger. Red demands attention and warns of danger.

Yellow-A color associated with the Sun and warmth. Yellow is an exuberant hue which easily expresses happiness and confidence.

Pink-A color associated with healing or soothing. It is comforting and non-threatening.

White-The color of innocence and purity, it is also the sum of all colors, and therefore represents the Divine and high spiritual ideals.

Black- A color which both represents and absorbs negativity. Black is the color of the nadir, confusion and dominance.

You may, of course, have your own associations with particular colors and wish to expand this list. The colors found in the aura are varied and unlimited.
Changing your aura persona is in effect a form of shape-shifting. You become what you project by using the characteristics associated with the colors you choose. If you want to be happier, choose a shade of yellow. If you want to open yourself to being more spiritual, choose a light blue or purple. Do you want to be more grounded? Take earth tones into yourself. Changing your aura colors will not change who you are, but it will change how you feel and relate to your emotions and situations.
Posted by AmethJera at 1:15 AM