Day 4: Things I'm Thankful for from My Childhood

Things I'm thankful for from my childhood? 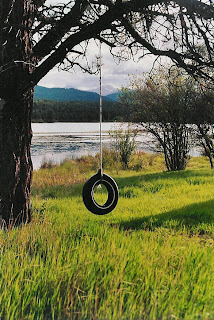 That I was never allowed to run wild.

My childhood was far from perfect, but I don't think I even entertained the thought of just going off and doing whatever struck my fancy. It just wouldn't have been tolerated, and I'm glad my grandparents were strict in that sense, because it helped me build character. Some of the kids from the old neighborhood were allowed to do whatever they wanted- and they were always in trouble. Not normal kid-type trouble, the kind of trouble that merited a visit from the truant officer, social services or the police...and a couple of them ended up dead before they were even out of their teens-because they were given 'freedom' by parents who were overwhelmed with jobs, or involved in  personal pursuits. You can't just turn a child loose on the street like that-not then and certainly not now.

It wasn't that I was being watched like a hawk every minute of the day-but at least one of my grandparents always knew where I was and what I was doing... And cared what i was doing...because some of my childhood chums were sent out to play the minute they got home from school and weren't allowed back into the house until sunset. It didn't stop me from doing normal kid stuff- I got in my share of trouble, believe me.Still, there was always someone there when I got home from school in the afternoon. Someone made sure I got my homework done, and helped me if I needed help. I was expected to be indoors by the time the streetlights came on- without being called home. And I was-or else. There were consequences if I didn't abide by the rules.

It wasn't like my life was intolerably structured. That's just the way it was in our house: the adults had the final say and the kids knew their place because, well... we were children. No one expected me to act like a miniature adult when I was a child.

I see this happening now, and I ache for the kids who have to grow up too fast and never get to be children. I see families where the roles of parent and child are reversed, where the kids are picking up the pieces or cleaning up the mess the adults have made- and it's just so very wrong. Childhood is fleeting and gone in the blink of an eye. Kids should get to be kids when they are kids. Looking back on this time now, I know how fortunate I was.

Yes, I am thankful that I was allowed to be a child when I was a child, because once that time of innocence and learning are gone- it's gone forever.
Posted by AmethJera at 9:02 PM