15 Days of Thankfulness: Those From Your Past 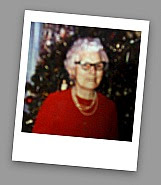 DAY 3
My grandparents raised me, so there was a little disconnect in my childhood. My mother and her sister-much to their chagrin- were more like my peers. Begrudgingly, they were required to treat me as an equal because that's how my grandparents viewed things. Truth to be told, there was barely a generation between us. I called my Grandmother "Mom", so the grandmother element was missing....until Aunt Laura moved next door.

Aunt Laura was actually the mother of one of our neighbors. She was born and raised in Wilmington and lived happily in Browntown, the ethnically Polish part of town. 'Browntown' was like a lot of the other European immigrant  neighborhoods on the west side-a little run down and dog-eared and only existed because the Roman Catholic Church had a parish there. That's how it is today: all the ethnic areas are grouped around large Catholic parishes-St Anne's (Irish), St. Mary's( Latino), St.Hedwig's (Polish), St Anthony's (Italian). In the late 1960's, the neighborhoods were starting to decline, so Aunt Laura's son moved her into the little house next door to us.

The house next door to us had been vacant for years. Mrs.Usselton, the former elderly resident, had been deceased for years. She was about as mean and disagreeable as anyone could get, so when Aunt Laura moved in, it was like a breath of fresh air. Her tiny house-one bedroom, kitchen, living room, bath and boiler room was little more than a box, but it was always bright and inviting.

Aunt Laura became the missing grandmother in my life. She was spry and lively, despite being deaf. She wore a hearing aid, but you could still hear her TV in our living room when the windows were open. All the neighbors knew what we were doing, because I had to yell so Aunt Laura could hear me. When I got hoarse, it was time to go home.

A couple times a week Mom would fix a plate of food after we'd had supper and tell me to take it over to Aunt Laura. I spent my pre-teens to late 20's in that little yellow kitchen with the tan tile, mostly drinking coffee, and playing Rummy. She taught me to make jelly and introduced me to Ellery Queen Mystery Magazine, and I think she read every murder mystery paperback available. There was always a pile under the couch to choose from. Some nights we'd just sit and read, each with our own individual books until one of us fell asleep. We used to watch the Perry Mason show together faithfully (It's a good thing CSI wasn't on TV then, or we'd never have gotten her away from the television again!)

When company was expected-usually her friend Mae who still lived in Browntown- she'd make sandwiches from canned corned beef , and what she called an Orange Jello Cake (with orange butter cream frosting). And percolated coffee...always 'the good stuff' for company.

While I was away my senior year in college, Aunt Laura developed bladder cancer, and the next spring, she was gone. Aunt Laura was 91 years 'young' when she died.  She had a habit of saying," So and so's all dressed up and no place to go.", and she made me promise to say it when she died...and I did. The night of her viewing, he son stood next to me in front of her casket as I lovingly looked down at my 'grandma' of  18 years and  only half-way seriously intoned, " Poor Laura- all dressed up and no place to go!"

Christmas was her absolute favorite holiday. She made the red corduroy dress she's wearing in the photo. She would only wear it on Christmas and Valentine's Day.  Aunt Laura out did herself making an extraordinary array of cookies before the holidays.  I  still use some of her recipes to make my own cookies at Yule.

Two of my most cherished possessions came from Aunt Laura- I have the two white plastic reindeer (circa 1950's) that were her favorites. They were the first ornaments on her tree every year and the last to be taken off ( I still carry out this ritual in her memory.)
I rescued them from the trash when her kids cleaned out her house after her death; they didn't care about them. I was astonished because I was certain they were family heirlooms. It turns out hey didn't have the same memories I had.  They should have come around to visit their mother more often- she only loved three blocks away.  It was their loss, believe me. She was a treasure- my treasure- and I am forever thankful for having her in my life.

Don't forget to visit my friend Cordelia's blog- 15 Days of Thankfulness was originally her idea! Visit her at:(cordeliascauldron.blogspot.com)
Posted by AmethJera at 3:39 AM

Email ThisBlogThis!Share to TwitterShare to FacebookShare to Pinterest
Labels: 15 Days of Thankfulness, Day 3, Past