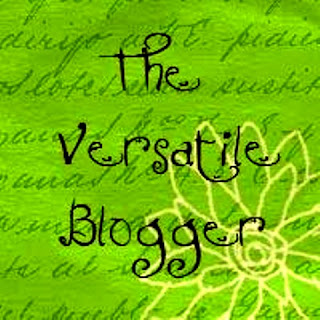 Thank you, Auroran Lauriel, for nominating Broom With A View for the Versatile Blogger Award ! Her own blog is at: http://besideaquietbrook.blogspot.com/


My Rock Star Muse, Rick Springfield, has been quoted as saying " Writers write to heal themselves".
I think that's a fair assessment, and truer than most of us will admit. At least I know it's true in my case.  I'll tell you a little secret: I write this blog for myself. I have a need for an outlet, and I love conversation. Broom With A View has been just that: a conversation, and a chance to connect with others- because we all need connection, we all need validation and recognition and just to know that someone else might just be there on the other side of the computer screen. I know there are people out there listening to my unique voice because I hear from you here at Blogger, on Twitter  and at AmethJera's Broom With A View page on Facebook- thank you for listening. We all have unique voices and I'm just adding my own to the cosmic cake mix of cyberspace.

Now, to finish qualifying for this award, I need to tell you 7 things about myself. It's more difficult than you think, because I tell a lot during my usual posts....but here goes:

1. I love to cook, but you probably already know that because I am endlessly posting that my Grandfather, Jeffery James Corti, was a fantastic cook courtesy of the U.S. Army. I can cook basically anything from scratch, and I love to experiment, which leads to never making dishes exactly the same way twice. Not sure if this is good or bad, but it feeds my spirit as well as my soul. Swami Muktananda said that food is sacred and should be treated as God, and I pretty much feel the same way- cooking is a form of love and a way of honoring the guests at your table.

2. I also sew. My Grandmother worked in a tailor shop, so I'm pretty good at fitting clothing....which usually gets me involved with costuming in community theater, etc.( I do make-up, too) I like tailored work clothes and chic casual stuff. I'm probably going to end up whipping up whatever I'm wearing to the premier of 'my' movie.

3. Which leads me to..." The Movie". I was featured in a documentary An Affair of the Heart about Rick Springfield and why he has fans who are still as enthusiastic about his music as they were 40 years ago... but the documentary is much more than just an intense look at Rick Springfield. It’s a human-interest story about holding on to and following dreams, the significance of connecting with like-minded people on our personal journeys (some fans have forged now decades long friendships that began with the music but have ripened into full friendships), and the importance of taking a break from our busy, stressful lives for some good, clean fun reminiscent of our  simpler days. The film makers came to Raleigh to film me in my church and did an online interview which, from the reviews they got from a preliminary with industry insiders, gave me high marks. Me! We aren't all groupie freaks, some of us have real lives and I guess they liked that, LOL...The premiere is September 26th in Malibu,the only time all of those featured will be together in one place and meet one another.( I'm selling plasma to make the trip. No, I'm not kidding.It's the only way I have to make money.)

4. I do doll house miniatures. Not toys, one in to one foot scaled museum quality miniatures of household items, and the doll house, figurines and scenery too. I can sculpt nearly anything in polymer clay (and paint it).
I've done professional diorama and displays, and I do custom orders for sale. No, I don't have a shop, but I'm thinking about eBay.

5. I love the arts-music, painting, sculpting, theater, literature-and I  do something in all  of it! Creative expression is my passion. I also love to be out in nature-hiking backpacking, rock climbing and camping.

6. I've been on both sides of homelessness. I did a  pastoral care internship as a chaplain at a shelter in Maryland, where the residents farm the land and receive the services they need to move on to a better life, and I was also the house manager in a transitional shelter for women and children. Later I became homeless temporarily because I was robbed when I first moved to North Carolina and had no other resources. Things aren't perfect, but are certainly much better. There aren't a lot of people who care in our society for those who have been marginalized, and that needs to change because just like me, a lot of others are one paycheck away from the street.

7. I'm an advocate for those with mental illness. Having clinical depression myself has shown me that there's still an unnecessary stigma  connected to mental health issues.There's still a lot of misunderstanding and fear. It doesn't mean the individual is 'crazy. Hollywood is to blame for a lot of the negative images we have of mental illness( just as it is for the negative image of witchcraft). Mental illness is a legitimate disease just like cancer, yet those who suffer from it are treated like they did something to bring on their illness or that it's some type of a character flaw. It's neither. There are many forms of mental illness and remission/recovery is possible in most cases with medication, therapy and social supports. People with mental illness can be productive members of society with the right type of help, but many don't get that from their health care providers. I'd like to help change that part of the health care system. Being a spiritual director and counselor is my way of giving back to society and to others who so desperately need to have a champion.


Okay, there are my seven things. Tonight I'm going to select my nominees for the Versatile Blogger Award.
Thank you again, Auroran Lauriel, for caring.