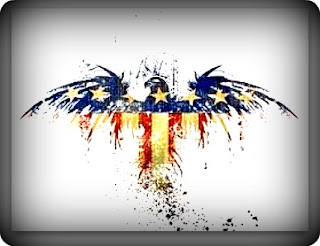 When I was growing up, being a patriotic American also meant you were a Christian. There was no question about being anything else, because I didn't know about  other religions beyond Jesus being a Jew. Being an American and being Christian inexplicably went hand-in-hand in my my middle class world.  You could not be one without the other. I had a vague sense that Jews in our country were also patriotic, but I'm not sure I believed they were Americans at the time. Everyone else was a foreigner, a Communist Russian  or someone needing saving by Jesus....because that's what we were taught in school and Church. The foreigners and Commies weren't God-fearing, at least it appeared that way to this 1960's child. During the cold war years I had a vague sense that I would never make it to 12 years of age because that evil bald bogeyman in Russia (Nikita Khrushchev) wanted to kill American kids. That's why they used to drag us out into the hallways to stand against the wall and have us cover our heads for protection when the bombs dropped. We developed a staggeringly wrong-headed amount of civic pride, but we didn't know any better. That was the innocence of a child's world in the 50's and 60's.

I've said this before, but my life is punctuated by a musical soundtrack. Songs that were popular at the time define a moment for me because they spoke to something I needed to say but was sadly inept in expressing. It's still that way today. I have a soundtrack going in the background of my thoughts all the time. I think a lot of us do. The turning point for the patriotic me was listening to a song by Sting entitled, Russians, with the haunting lyrics:


"...We share the same biology
Regardless of ideology
What might save us, me, and you
Is that the Russians love their children too..."*

* Words and music by Sting. All rights reserved.

The Russians love their children, too. As a self-righteous American, I had never entertained the thought of the Russians-or the Saudis, the Chinese, the Germans, or who ever we were demonizing at the moment for the purpose of patriotic propaganda- loving their children. It never crossed my mind that I had a Russian counterpart as a kid.  Now, as an adult, I ache with the realization I have counterparts in every part of the world, and they are not living as well as me. Some of them are hungry and homeless, some will never know the freedoms I have, and it breaks my heart.

I'm not as naive as I was. I have a keen sense of social justice that has caused me to be very much aware of the faults of my government. But I also remember what's right with America, and I think I know what we're missing: good old fashioned, no-holds-barred, blow-out celebrations of our country's ( abet fractured) history. We need days where we can be proud to be American- the 4th of July, Veterans' Day, Armed Forces Day- and days where we reflect upon what being an American has meant when our country did things that weren't so bright, shiny and wonderful...like  the anniversary of dropping the atomic bomb on Nagasaki and Hiroshima, and a somber observance of Memorial Day with out the retail sales and parades.


Patriotism, like everything else, needs balance. There is a light and a dark side. Being mindful of both is what keeps it from becoming an obsession. I can love my country, appreciate what the founders of this nation did to give it roots and wings, and support out military with gratitude, all while hating the concept of war and killing and elitism
I'm really not as much of a flag waver as it sounds, but I have come to appreciate what citizenship has given me. I could not be a Pagan in the same way I am today if I were in any country other than America...and for that, I can gratefully wave her flag in return.

Posted by AmethJera at 6:32 AM