A Fire In The Belly

The tastes and smells of Autumn are as invigorating as the landscape. The bouquet of Autumn spices -allspice,cinnamon,ginger,nutmeg,cloves,mace, cardamon -warm the body and soul not only in the kitchen, but raise the energy vibration in rituals during the cold weather months.

Allspice's masculine/fire (think Mars) energy is applied when it is combined into mojo bags or incense to attract luck or money. Cinnamon reflects the feminine side of  these qualities (influenced by Venus) with the addition of success and power. Ginger adds earthy heat; try drinking a tea containing ginger prior to engaging in ritual and feel the power of the Sun/Mars/Ra within. Nutmeg awakens the vastness of the planet Jupiter and has been carried as a prosperity amulet for centuries. Cloves is an excellent ingredient in mixtures intended to raise spiritual vibrations, and it's useful for driving out negativity. Mace is the outer covering of the nutmeg and increases psychic ability because it opens the Third Eye.
Cardamon-the spice that gives Chai Tea it's distinctive flavor- has been used in Asia to 'inflame' the fires of passion.

All of the above mentioned spices correspond to vitality and a robustness for life. Perhaps that is why they appear in various combinations in our favorite savory Fall/Winter foods.

From My Personal Grimorie: Cold Conjuring

As I write this, we've entered the late Autumn. Gone are the bright riot of color seen in the earliest days after Mabon. Now that the trees have shed their leaves, all that remains are their stark, gray skeletons. When the wind blows at night, the wooden bones clatter, and the crisp brown leaves dance in circles. These are the evenings when I settle in with a cup of hot tea to ponder and read by candlelight: I have entered the Place of Deep Indwelling, a palpable place when I feel drawn down, down the spiral of space into the most ancient of times. The cold outside is oddly exhilarating as it contrasts against the warm air inside. I find that some nights, when I cannot sleep, opening a window just enough to allow a finger of cold air curl in relaxes me.

Occasionally, I also do this when I meditate, because I find the shock of cold helps bring clarity quickly when I'm attempting to empty my mind. The primal rawness of cold is a wonderful focusing tool.

If the weather has dipped below freezing and there are icicles, I gather a few clean, fragile points to use in magickal workings during ritual. I suppose they could be stored in the freezer until ready to use, but I have always taken them just before I cast my circle, when I believe they are most potent. I have used icicles in place of quartz crystals with very satisfactory results. Place the ice points on a pretty dish or ornamental tray so that the top of your altar isn't marred as they melt. Depending on the nature of the spell, the water resulting from the melted icicles can be bottled and saved for use later, or poured outside and returned to the earth.

If you know anything about the basics of spell work, then you are aware of the result of putting a poppet or spell bag into the freezer. Placing these things outside ( selectively) will have the same result.

I have found that a bowl of snow has many uses as well: projecting pure, white energy into the bowl while the snow melts will provide a naturally consecrated amount of blessed ("holy") water to be used in the future.
It can be added to any spell that calls for spring water; or used to anoint yourself or ritual items. The water left from melted snow is naturally powerful because it already contains the energies of water, air and earth. It is imbued with whatever minerals it has come into contact with during it's formation in the atmosphere. Snow also has its own particular form of crystal energy. A bowl of  snow can be used for scrying (look for shapes to appear as it melts. Water left in the bowl can also be used for scrying. I have gathered snow in a metal bowl, allowed it to melt, then put it outside to re-freeze and used the surface of the ice for a different version of scrying (Metal or freezable plastic is best. Don't use pottery or glass that will crack or shatter). Droplets of condensation from melting snow that has been heated is especially good to use in ritual washes for the body, tools, or the altar. ( A lovely winter floor wash can be made from heating snow until it melts, then adding pine needles, a pinch of cinnamon, and a drop of lemon or lime. I don't recommend using orange juice as it can leave a sticky residue.) In this way, either snow or ice can be used as the liquid in which to suspend herbs for aromatherapy. I do not recommend the use of either snow or ice in anything you will consume/drink, because they could contain harmful impurities if taken internally. If you do use snow/ice in this way, be sure of the safety of your source.

Finally, did you know that snow can be used to make a figure to be used in the same way as a wax candle?
You don't have to have any artistic talent to do this: it's a little like making a poppet out of snow. Mold the figure by compacting snow roughly into any form you want, visualizing your desire while doing do, or place herbs, etc inside the core of the figure as it is being made. Fix it with your intention, or incorporate it into your spell work. The magick is released as the figure melts on its own.

Posted by AmethJera at 6:00 PM 0 comments 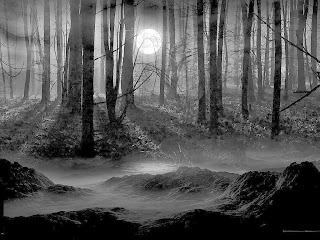 As dusk fell like a silent pall,the dry leaves spin around my feet in little dust devils. I packed all the treat bags I found in the bottom of the tote where my Halloween decorations sleep all but six weeks of the year and headed for the street corner in front of my apartment building. It was barely dusk, but the town had decreed a two hour window for Trick or Treating-perhaps a wise decision since someone in the next town saw a mountain lion stroll through their back yard just last week.

A little weather working had been in order earlier in the week when there was a fear of snow; as it turned out, the evening was mild, if breezy. At the stroke of 8 o'clock all the ninjas, witchlets and dinosaurs disappeared from the streets like magic...or perhaps they were enticed by the Great Pumpkin being shown on four TV channels simultaneously.

In the cemetery just beyond the town limits, the dead began their annual trek to join the living. I didn't see anything, mind you, but I felt them awaken from their long sleep and cross soundlessly through the Veil. There were hundreds of them, their spirits flowing along like a river as they filled the streets.
I wanted to connect with them, to discover who they were in life, and where they visited from the Afterlife. I tried, but no one came.

At last, when I'd given up trying, a lone little spirit came through...it was Tinker, my long-dead familiar. I felt the softness of kitty feet kneading on the mattress, and finally she curled into a ball and snuggled behind my knees as she did in life. We drifted peacefully off to sleep together.

I don't pretend to know anything about the Afterlife except that I believe with all my being that there is a place where our loved ones wait for us. I don't exactly support the concept of Heaven in the Judeo-Christian way, because I think that if there is actually a Heavenly Reward ( as promised), it's a place each of us create specifically for ourselves to dwell until we're reborn. My only thoughts on the subject of reincarnation is that perhaps our spirit somehow blends into the great Cosmic Cake Mix where the essence of who we are contributes to the formation of someone or something new. Perhaps a glimpse of us is recognizable now and again to those we leave behind, and that's why we so often identify a loved one in a gesture, a smile or a vocal inflection. Perhaps memory can call up physically the feel of a long-dead cat sleeping lovingly on a bed. Perhaps it's simply yearning and imagination. Whatever it is, it's valid experience. Does our longing for what we've lost create just the right vibration to manifest into being the Dead? Is that why it's so necessary to keep speaking the names of our ancestors; so they can continue to be with us? I ponder these things, especially during the Days of the Dead,when the shadows are long and silent.

Posted by AmethJera at 1:24 PM 0 comments

This Halloween/Samhain marks the third anniversary of the creation of Broom With A View. When I started this blog, I wasn't sure anyone would want to read it, or even what I would want to write about...but the support from the community has been overwhelming, and I am humbled.