The Hare In The Moon 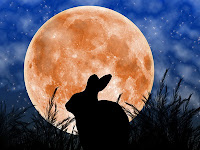 Manitou,the Great Spirit to the Algonquin tribe manifested himself as a hare. Great Hare, also known as White Hare, was thought to live on the Moon ( another version says he lived with his Grandmother, and that she was the moon). Great Hare was visible to his people from earth on the face of the moon and as he looked down over all, he was considered to be the Provider of All Life - water,wind,fire and soil and all that came from them.

Yet in other traditions, Hare was a Trickster figure,wiley,quick and mystical. He is credited with the creation of the Midewiwin, or Grand Medicine Society of the Northeastern native tribes, a secret magical lodge. Their gathering places are in open spaces beneath the moon, or in domed structures which mimic the shape of the moon [ https://en.wikipedia.org/wiki/Midewiwin].
The hare is associated by most tribal peoples with birth and rebirth (partly due to its relatively short gestational period of 30 days), an auspicious creature sacred to their culture because of its fertility and abundance.
However, not every ancient culture thought so highly of them: the Biblical book of Leviticus called the hare or rabbit "unclean". Others thought the creature so taboo that it was  unlucky to even speak its name. The Greeks of antiquity protected the hare " ...for the sake of Artemis" because it was one of her symbols and therefore refused to hunt it. Superstitions were frequently associated with the hare or rabbit because they were believed to be a common disguise for witches and commonly witches' familiars ( a close second to the black cat). It was purported that the only way to kill a witch who had shape shifted into a hare or rabbit was with a bullet made of silver-the moon's metal. ( Much like the werewolf myth.)
The hare was lucky or unlucky at various times in history, as folk lore associated with them morphed and changed in  public opinion.  During World War I, it became the fashion for loved ones to give a soldier going off to war "a lucky rabbit's foot" ( But not so lucky for the rabbit, eh?) Mothers hung the amulet above their children's beds for protection throughout the night. With this new positive association came the habit of saying " White Rabbits, White Rabbits, a pinch and a punch for the first of the month" ( or variations such as " Rabbit, Rabbit") to wish others good fortune throughout the month.

Posted by AmethJera at 5:12 PM 0 comments

The Spiritual Meaning of the Blue Porch Ceiling 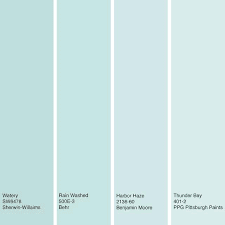 Haints are the malevolent spirits of the dead trapped between this world and the next.The word haint is a variation of another word-haunt- and comes from the Geechee Gullah language/culture of the South Carolina-Georgia coasts and barrier islands. It's primarily used throughout the old South, although I have heard it occasionally used in New England also. Despite it's muddied origins, it's still understood that a haint is defined as meaning a ghost - but  a type of ghost unlike any other... haints are vengeful, violent... the undisputed mischief makers of the Shadowlands.

Haints are right up there at the top of ghostly entities in the Southern US, and like all apparitions and superstitions, they have an Achilles Heel: they cannot cross water. Short of building a moat around the old homestead, citizens of the Old South  have a much more practical and stylish solution...they paint their doors, window sashes and porch ceilings blue. Not just any blue, but a particular shade that reflects the hue of the sky and water that has become known specifically as Haint Blue. The original paint was made with lime and milk and whatever blue pigment was available, adjusting it until it was a shade they thought matched the sky and water in their area. The idea was to trick the haints into thinking they had come upon water, which they could not cross. A blue porch ceiling served a similar purpose, where the haints would be confused into believing they were flying into the open sky. Therefore, on either account, they did not enter the dwelling and vex the residents with their mischief.

Using the color blue  is a universal  method of deflecting spirits. It's not only used by the Gullah descendants of freed African slaves in the coastal South, but by some Scot Irish in the Appalachians as well. For the mountain dwellers, woad, used in their homelands as a blue dye, was mixed into milk paint and applied to porch ceilings to not only keep out ghosts and malevolent spirits, but the lye added to the paint had an added bonus of keeping out insects as well. Sometimes the ingredients would ferment, which also acted as a natural insecticide.

Nowadays any variation of sky blue, aqua, baby blue, light teal blue or green, or a color representative of  water/sky can be used. The major paint manufacturers all have their own version of haint or porch ceiling blue. It's now up to the tastes of the individual which shade to use to complement the color scheme of their home. It's interesting to note that the shade will darken in the light during the day, following the path of the sun. Sometimes it looks like the sky, and other times a body of water.

Notably, the belief that the color blue repels evil is not limited to the Southern US: in the Western US, turquoise painted doors serves the same purpose, while across the ocean, a stripe of  azure blue was often seen painted across the top of doorways in ancient civilizations. Evidence of this can be seen in Greece and Italy today.

Posted by AmethJera at 8:47 PM 0 comments